Five hundred people packed into the tiny intimate Harrogate Theatre for what is to be Stewart Francis’s final tour.

Supported by fellow Canadian, Allyson June Smith, distancing herself from Americans and talking about male exotic dancers, pole dancers and firemen, as well as her grandmothers love of turbulence, Allyson delivered a hilariously funny set for the next 20 mins.

Stewart’s a master craftsman, the ultimate King of one liners and Puns, he has been on the circuit now for 30years and the last 13 of those he has spent living in the UK where he has starred in the likes of Mock The Week and 8 Out of 10 Cats. Delivering his one liners in what is mostly a dead pan style, in a calm and almost soothing voice, it wouldn’t be wrong to describe Francis’ manner as almost gentile. Aside from his style, Francis is unlike a lot of other comedians in so much as he doesn’t litter his set with profanities proving you don’t need bad language to be funny.

The shows starts with Stewart dancing onto the stage to Bruno Mars and you know for the next hour you are in for a special treat. His delivery of puns and one liners literally just keep flowing one after the other. Very briefly we will taken on a few more narrative stories, like his visit to the doctors for Tinnitus, more daringly his sex life with his wife and then we have Sir Trevor McDonald who keeps making an appearance, usually in Stewart’s wife’s negligee, before going back to the almost childish, but very funny none the less, quickfire jokes.

Throughout the evening, Francis does comes across as a very humble person. He has had a few experiences with hecklers that has no doubt contributed towards his decision to quit stand up. Not tonight though, this audience was in great spirits and seemed almost sad that this would be the last time they got to see Stewart perform. There is no doubting that when he does finally call it a day, he will be sorely missed on the comedy scene.

He came back onto the stage for a very brief encore before his wife beeped her car horn and, with that, Stewart Francis walked “off into the Punset” for the last time to the sound of rapturous applause.

With his final tour not complete until 2019 you still have chance to catch him one last time on the following dates here. 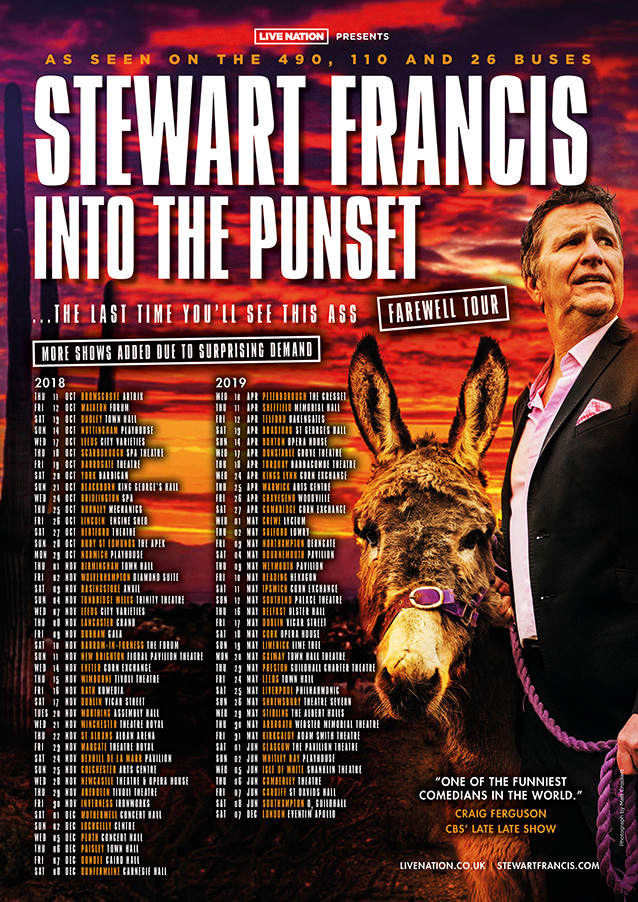