Sam Fender isn’t just one of the most celebrated artists in indie music but across the whole of the British music scene. From releasing his debut single, “Play God” back in 2017, to his critically acclaimed debut EP “Dead Boys” in 2018, his masterful debut album, “Hypersonic Missiles” in 2019 and now his BRIT Award nominated record “Seventeen Going Under” last year, this festival headliner has the whole industry at his fingertips.

Tonight, Fender begins his sold-out arena tour at Nottingham’s Motorpoint Arena, and I’m beyond excited. I want to see how his stage presence affects his performance, if he can show off his sensational lyrics effectively and how he can entertain a full 10,000 capacity crowd.

As I walked into Nottingham’s Motorpoint Arena, I didn’t see one seat unreserved, the standing area was as full as I’ve ever seen it. Sam Fender came onto the stage with his band straight away to perform “Will We Talk?” and from the second they start to play, goosebumps ran down my spine. Everyone was singing along, the band played phenomenally, it was a fantastic opener. Moving onto “Getting Started”, that energy continued in bucketloads. The band chemistry was sublime, but the biggest shout out goes to saxophone player, Johnny ‘Blue Hat’, for really adding an atmosphere. Sam’s vocals were incredibly on point as he was singing alongside the whole crowd, really relishing this opportunity, loving what he’s doing which resonated with the crowd. It was wonderful.

“Hey Nottingham, how we doing?”, Fender asks as everyone screams. “It feels really weird that we’re playing rooms like this!”, he says, whom for as someone who has followed his career from the get-go, certainly agrees. He then plays “Dead Boys” with everyone screaming along to the heavily impactful lyrics. This is a song written about male suicide rates across the UK and the song’s message translated perfectly into the arena through the performance as a whole and via the visuals up on the LED screen behind him as the impactful track made goosebumps run down my spine once more, triggering me to tear up. When the song reached its climax, there was major mosh pits, drinks being thrown in the air, it was fantastic to see. Purple strobe lights fill the stage as the soft-sounding “Mantra” is performed live, and Sam and the boys performed it exquisitely with so much passion. The brass was fantastic, bringing the jazzy vibes of the song live to a wonderful audience. The band chemistry continues to wow me through that song and the next song, “Better Of Me”, a track that appears on the deluxe edition of Fender’s sophomore record, “Seventeen Going Under”, as we get to see the fantastic stage design. The performance was intimate and showed me why he’s the perfect festival headliner. Can he sell out stadiums sooner than we expect? I certainly think so…

“We’ve got the chilled ones out the way, let’s go mental”, Sam says as the crowd follows his instructions as he performs “The Borders”, provoking a massive singalong from the crowd as well as a lot of mosh pits while Fender’s lyrics grow even more impactful. The band play phenomenally well, besides Sam, who messed up part of his guitar solo but recovered extremely well, not letting the pressure of the first night of his first-ever arena tour phase him. After a round of applause, Sam goes “I wanna see what the Midlands is capable of when it comes to mosh pits!”, as he and the band perform “Spice”, a track from his 2018 debut EP, “Dead Boys”, as the crowd didn’t disappoint by creating a massive circle in the venue. I couldn’t help but notice, however, that Fender missed the whole of the second half of the first verse, but as that was when the mosh pit kicked off, it could have been deliberate, but it still worked very well without it so I’m not knocking off too many points here. I also really loved the stage design here, as the ceiling of the stage came down more to Sam’s height to showcase some fantastic lighting. It was a great experience.

Fender and the band performed the B-Side to “Seventeen Going Under”, titled “Howdon Aldi Death Queue” a decision that I’ve not seen a lot of artists make, but with a b-side as good as this one. I can see why he decided to add it to the setlist. It was fantastic with some brilliant visuals added in too, the crowd were loving every second of it, and just as it couldn’t get any better, CO2 blasts through the stage, adding even more atmosphere to the sensational performance. As the crowd start chanting “Shearer”, a nod to Newcastle footballer and manager Alan Shearer, who Fender is a massive fan of, “Get You Down” plays and we have some sensational mosh pits here. The band chemistry was really strong too, as I realise that the goosebumps I had back in “Will We Talk?” at the beginning of the set haven’t faded away. The string instrumentation wasn’t played live tonight and was only played through sample pads, though I wish it was live as that would have added to an already perfect show thus far.

“Spit Of You” plays next, as old photos from Sam’s childhood appear on the screen through some beautiful visuals. Although I do find this trope rather cliched, it fits the theme and it wasn’t at all overpowering (not like when JLS attempted to do the same thing last November and failed miserably…). Everyone was screaming along to Fender’s lyrics, people were on each other’s shoulders, it made for a magical experience. After Sam takes a moment to take in his surroundings of the beautiful 10,000 capacity crowd, he performs his debut single, “Play God”, which was performed with such beauty and passion. The unprovoked clapping from the crowd was good enough already, never mind the mosh pits and Fender’s remarkable high-note at the end, it was truly beautiful. To see where this song started, in a room with his management where he played this song thinking it was shit, to 10,000 people singing it back to him, it made me feel incredibly emotional, to say the least.

Sam then plays “The Leveller” and the band chemistry was stronger than ever. The Bond Theme sounding track resonated well in a live setting with some great stage presence from everyone. It was a fantastic performance with the strobe lights dominating the room, but the finale was the biggest highlight of it all. Fender goes on to joke about encores, saying “We’re gonna pretend to do one more song – it’s a thing they do called an encore. It’s a thick part of the gig but it’s tradition innit?”, as he then plays “The Dying Light”, one of my favourite songs from 2021. He plays the piano, joking that he’s been hanging around with Elton John too much, in which he performs the first part of the song remarkably, with the entire crowd getting their phone torches up in a phenomenal moment. As the song picks up, confetti explodes through the entire arena, adding to the remarkable band chemistry, igniting this gorgeous energy in the room. Special effects can be misused a lot during live shows, but with this one, Sam and his team really hit the nail on the head, it was fantastic.

As Sam came back onto the stage, disaster struck as there was a technical issue around lead guitarist, Dean Thompson – his guitar didn’t work. And so Sam came onto the stage to entertain the crowd while the crew sort it out. He does so by performing “Leave Fast”, a song that wasn’t performed since his record-breaking socially distanced show in Newcastle back in August 2020 at the height of the COVID-19 pandemic (that seems like such a long time ago now!), and a song that wasn’t originally on the setlist, and for good reason, because he couldn’t remember a fucking thing. He forgot his lyrics, and his chords, usually an unforgivable move from any artist, but Sam’s incredible personality got him out of it, he made light out of the issue. It even resulted in him asking: “What’s the last verse go like?”, with the Nottingham crowd chanting “SHEARER!”, getting a massive laugh from him and the crowd. His ability to play this on the cuff while sorting out a technical issue that wasn’t anybody’s fault was brilliant, and it’s such a credit to him for making it work. This made the show that much more intimate, something that’s incredibly hard to do in a massive venue, so despite those issues, this got him some extra brownie points in my book.

Those technical issues continue through “Saturday”, as he performs the song acoustically in which everyone screams the lyrics incredibly loudly. After the issue is finally resolved, the band join him to perform the song altogether. I’m going to be “that guy” and say that I don’t like this song at all. It is Sam’s only weak song and I have to turn it off when I hear it, but despite those issues, it was performed brilliantly. The brass added to it was really great too, it was great to watch. Moving on to “Paradigms”, drummer, Drew Michael was the highlight here, with some fantastic instrumentation from him and the rest of the band. The guys loved performing it and you can tell why it’s their favourite to play. The crowd loved it too, it was brilliant.

Smoke fills the arena for the final time, as Sam plays everyone’s favourite, “Seventeen Going Under”, and the atmosphere was as electric as you expected. It was beautiful and a real fan favourite, as everyone was singing, dancing, moshing, the lot. I saw three lads in the standing area just holding each other and jumping, it was something I loved seeing. Then going into the last song of the night, “Hypersonic Missiles”, here we had a stadium style finale, filled with mosh pits, phenomenal band chemistry, brightly-coloured confetti flying through the arena, it was a real spectacle.

Like most opening nights, Sam Fender’s first show had some teething problems, but ones that were dealt with really well. Sam’s vocals were incredible, as was his and his band’s live presence and chemistry. The crowd were beyond phenomenal and the stage design was perfect down to the finer details. I was significantly impressed by how Sam brought a level of intimacy to the 10,000 strong arena but still have that stadium and festival headline feel to the gig. This is a show not to be missed, and anyone lucky enough to have gotten a ticket, then you’re going to be in for the night of your life, as tonight, Sam proved that he isn’t just one of the greatest acts on the planet, but two albums and four and a half years into his career, he’s only just getting started… 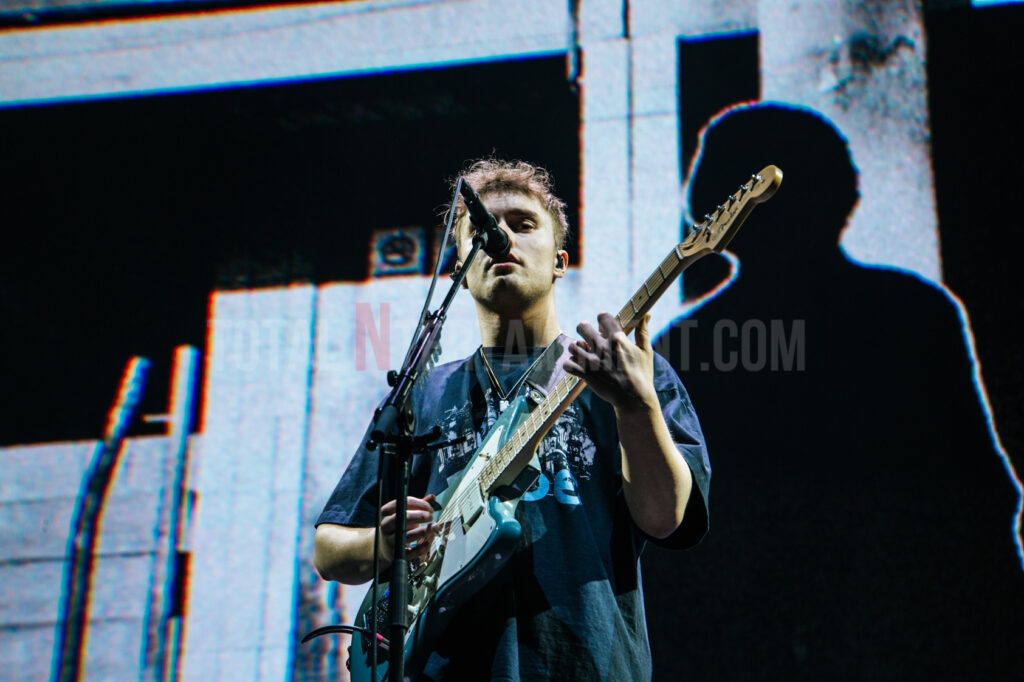 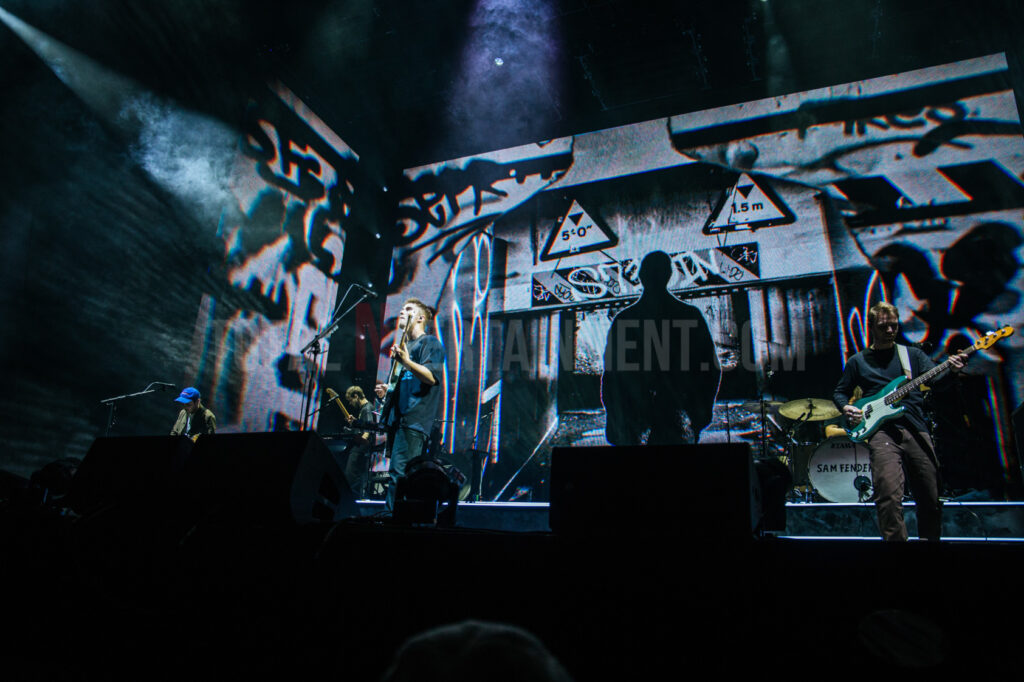 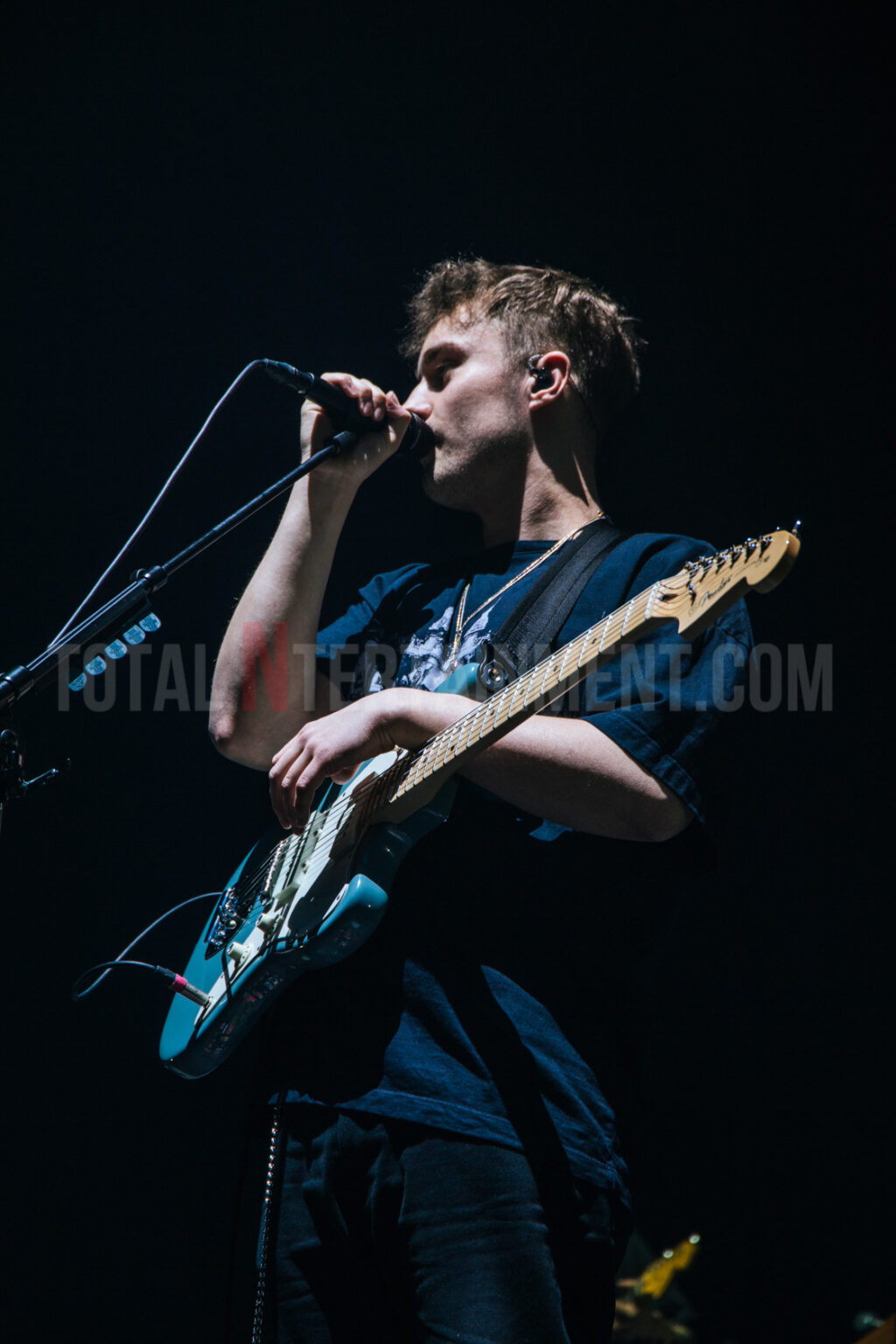 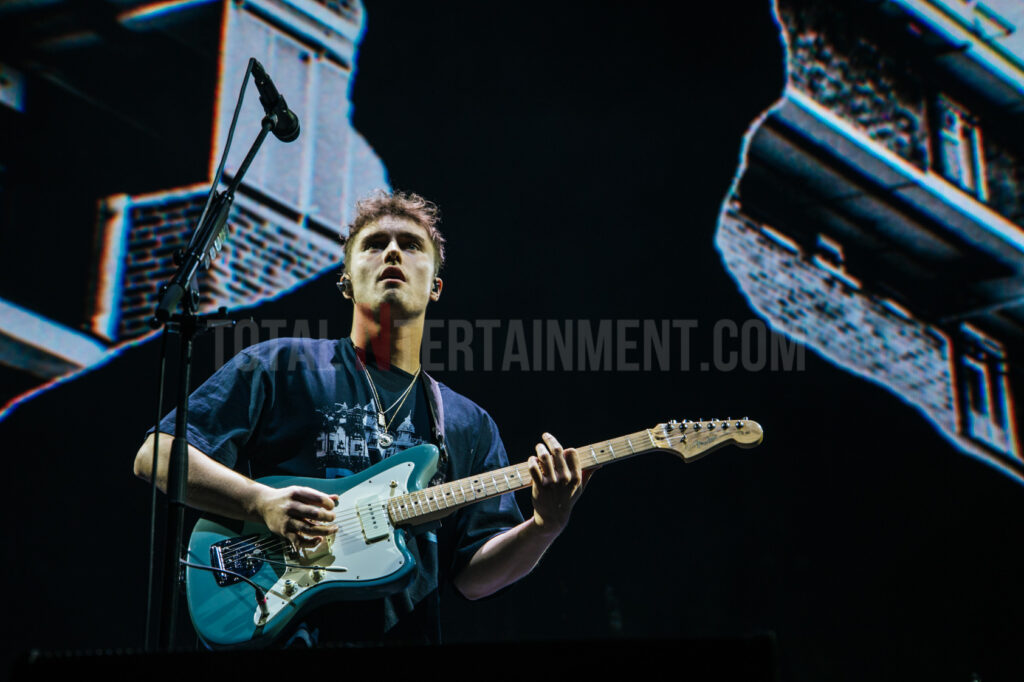 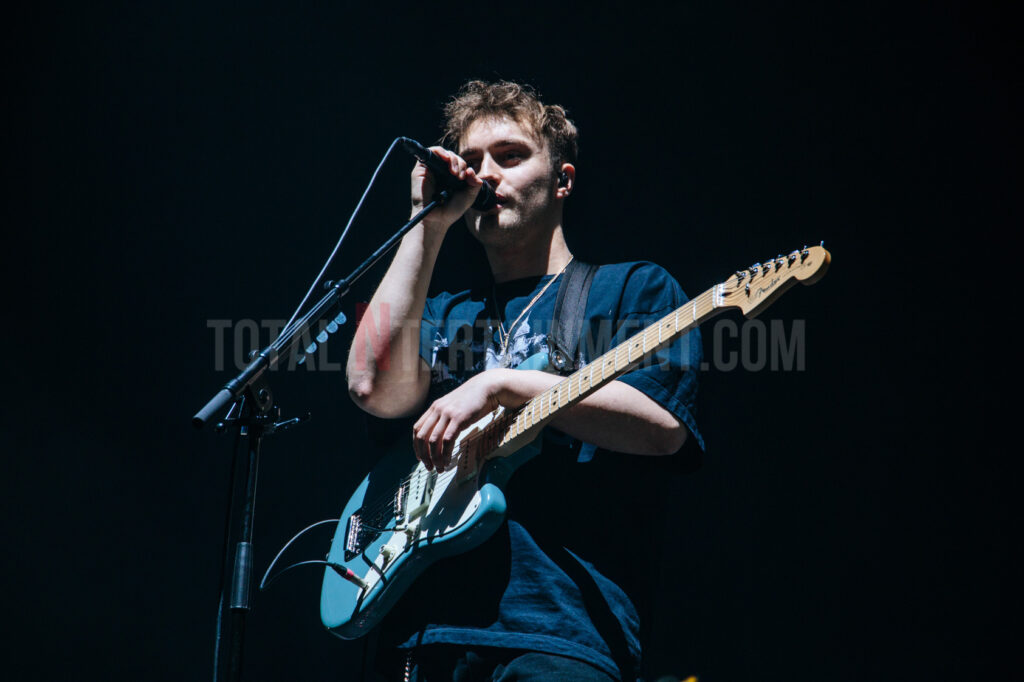 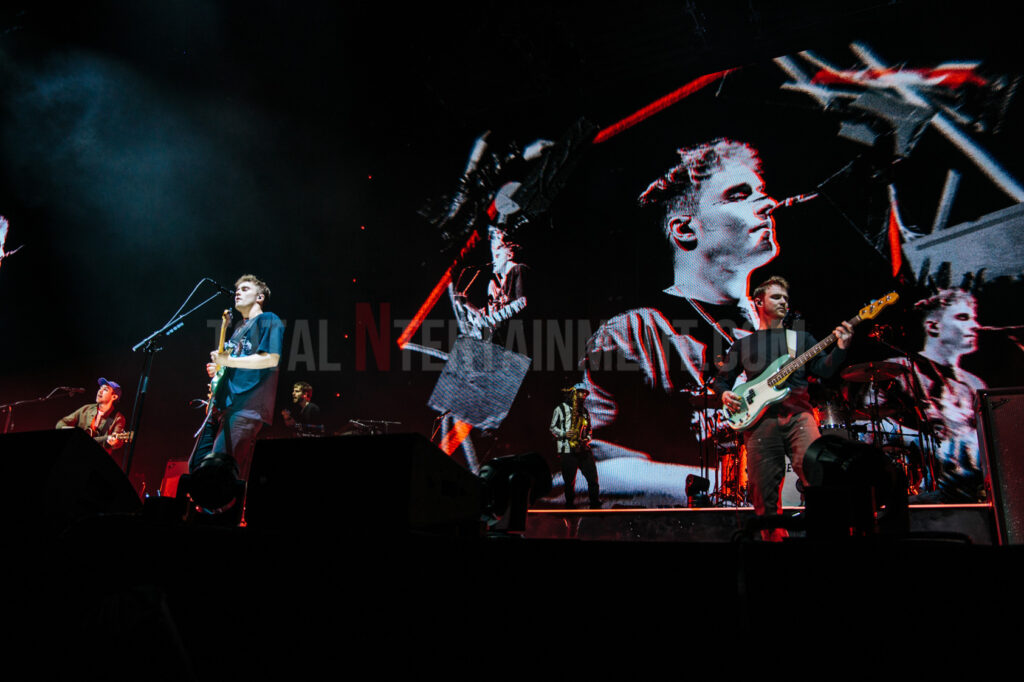 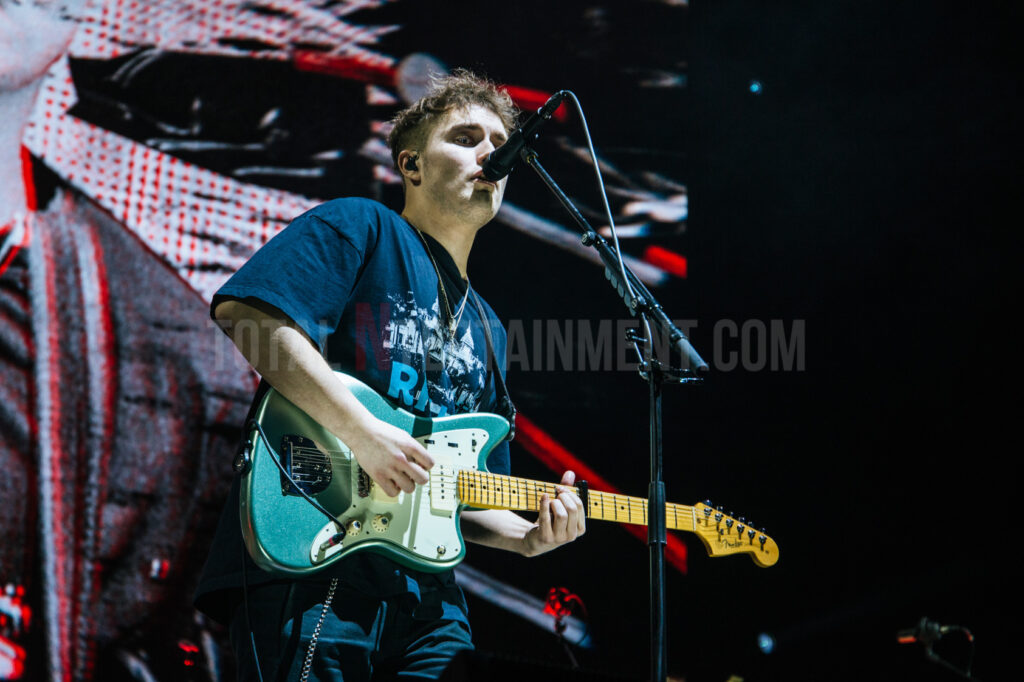 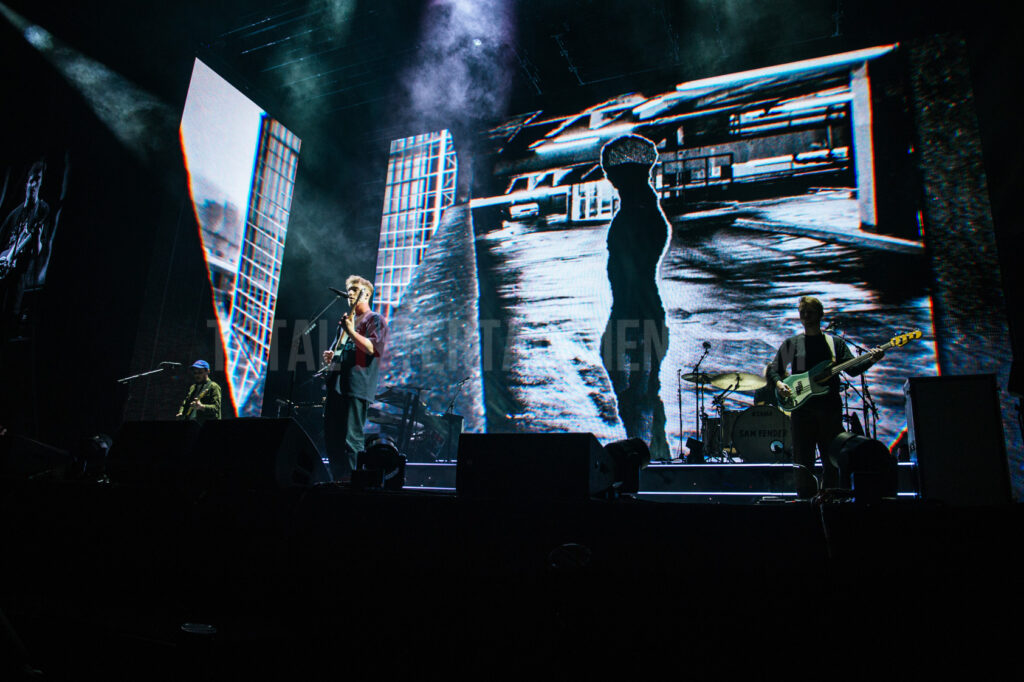 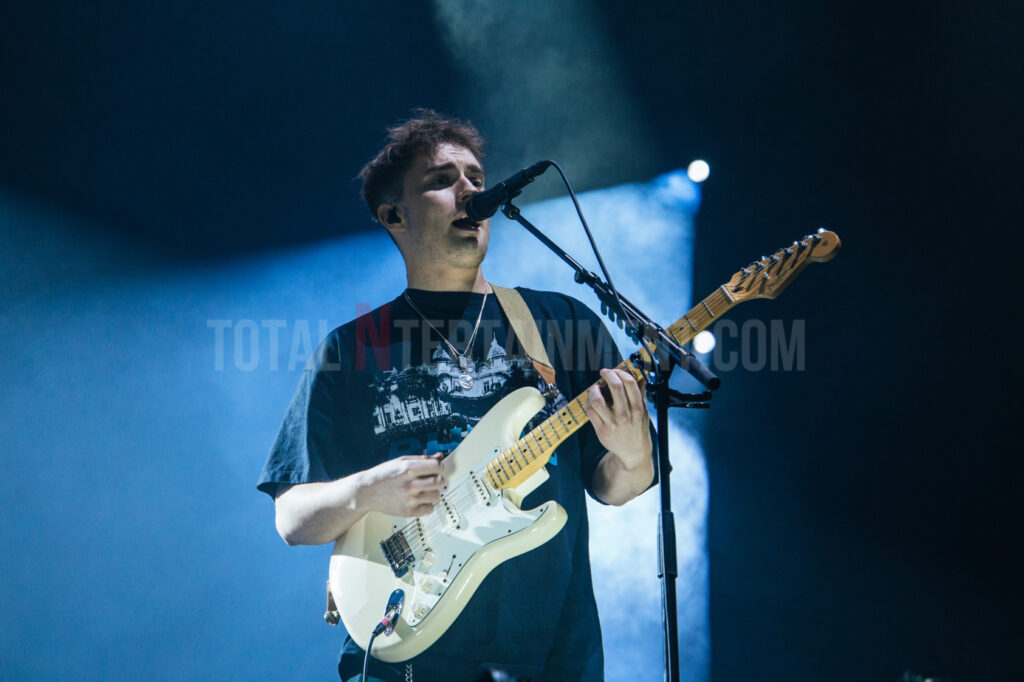 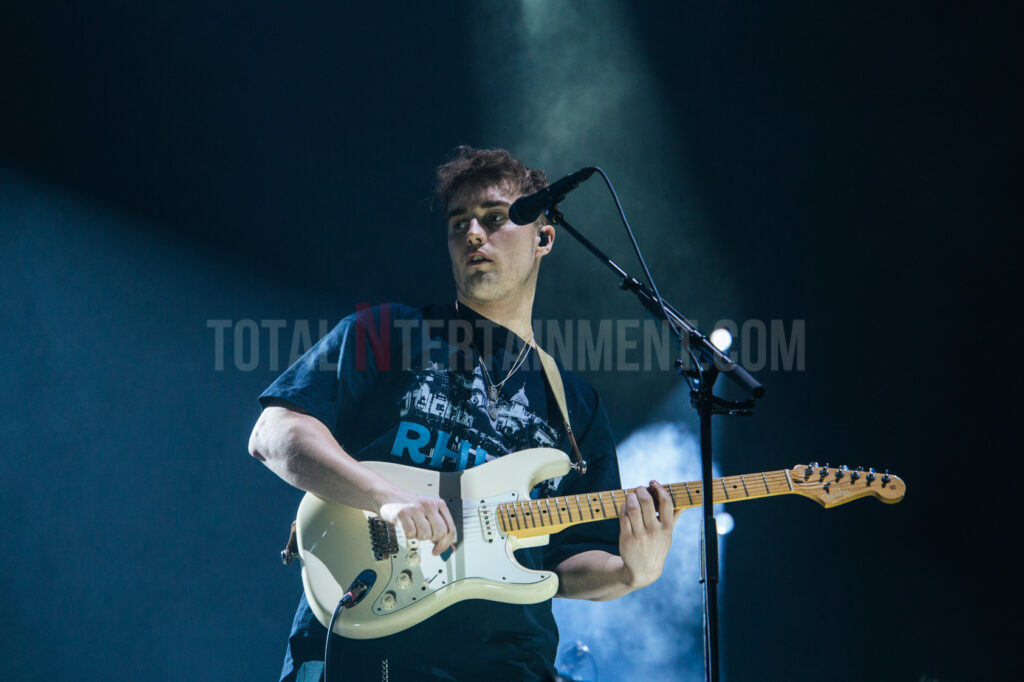 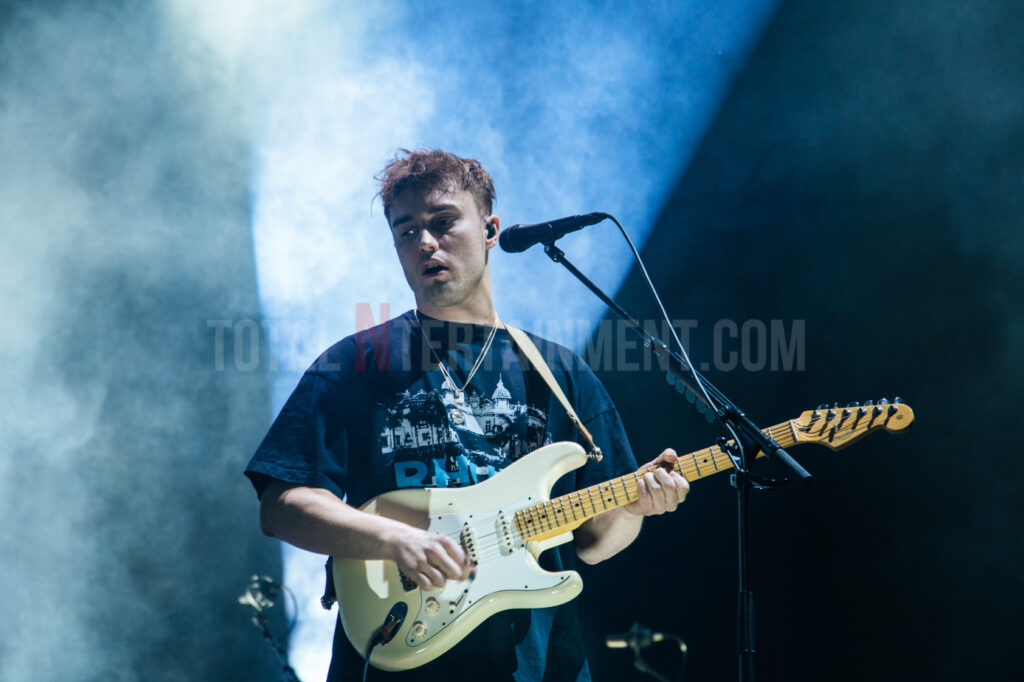 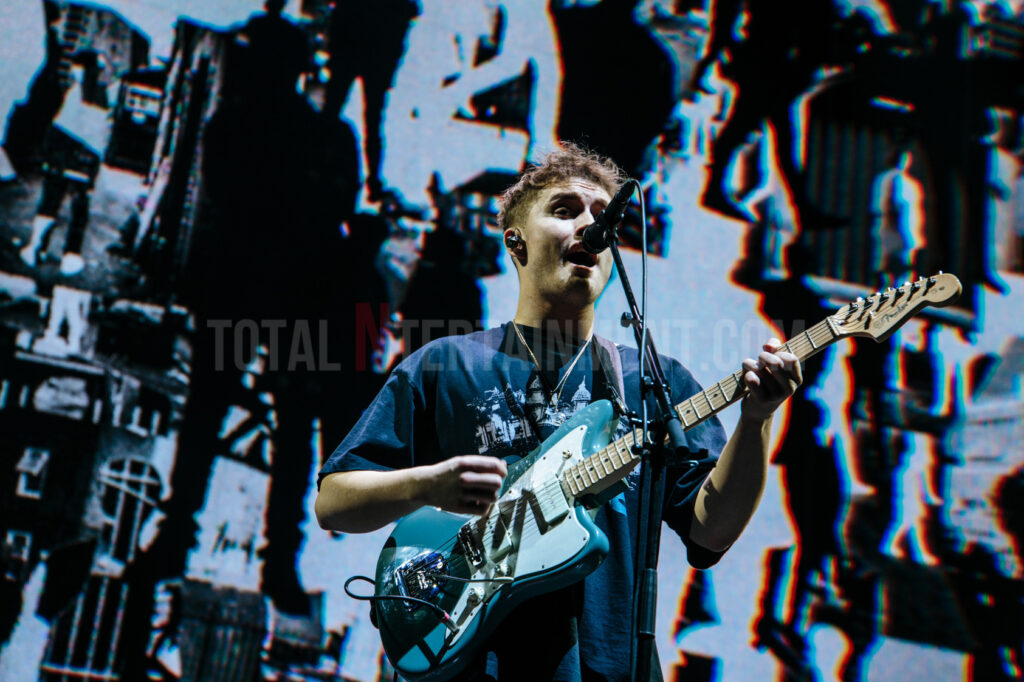 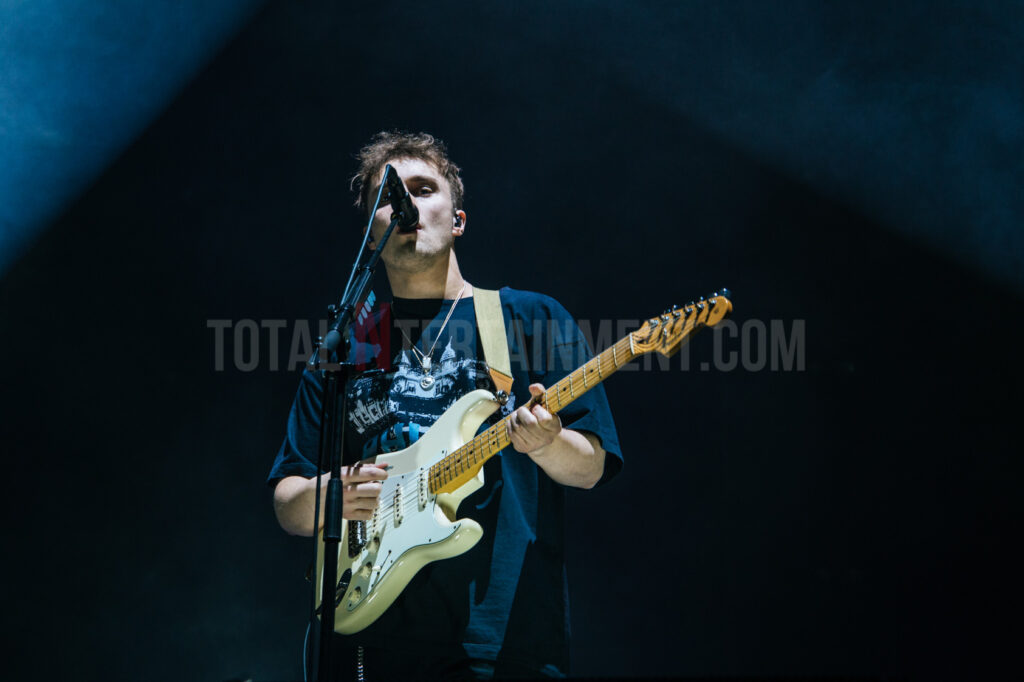 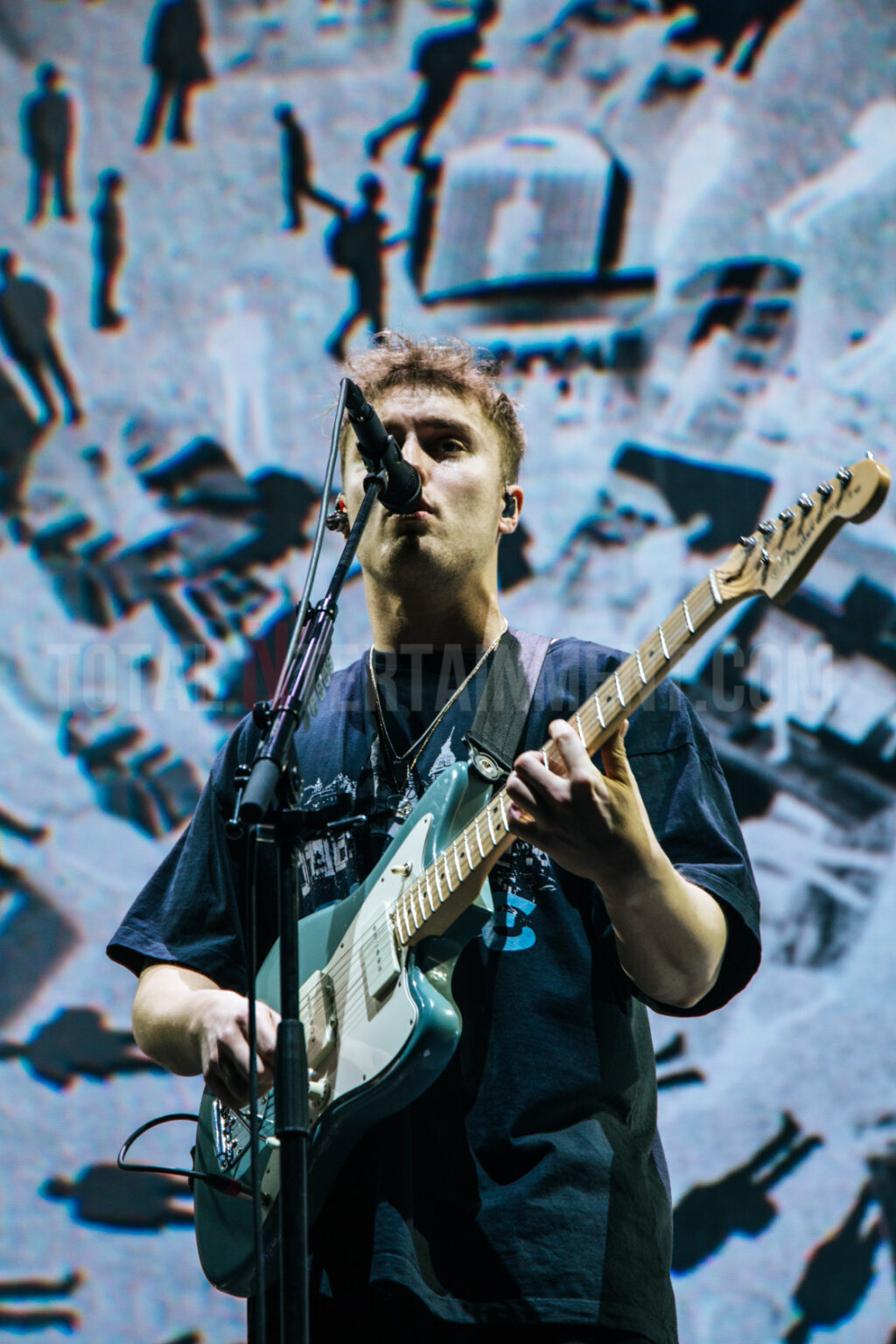 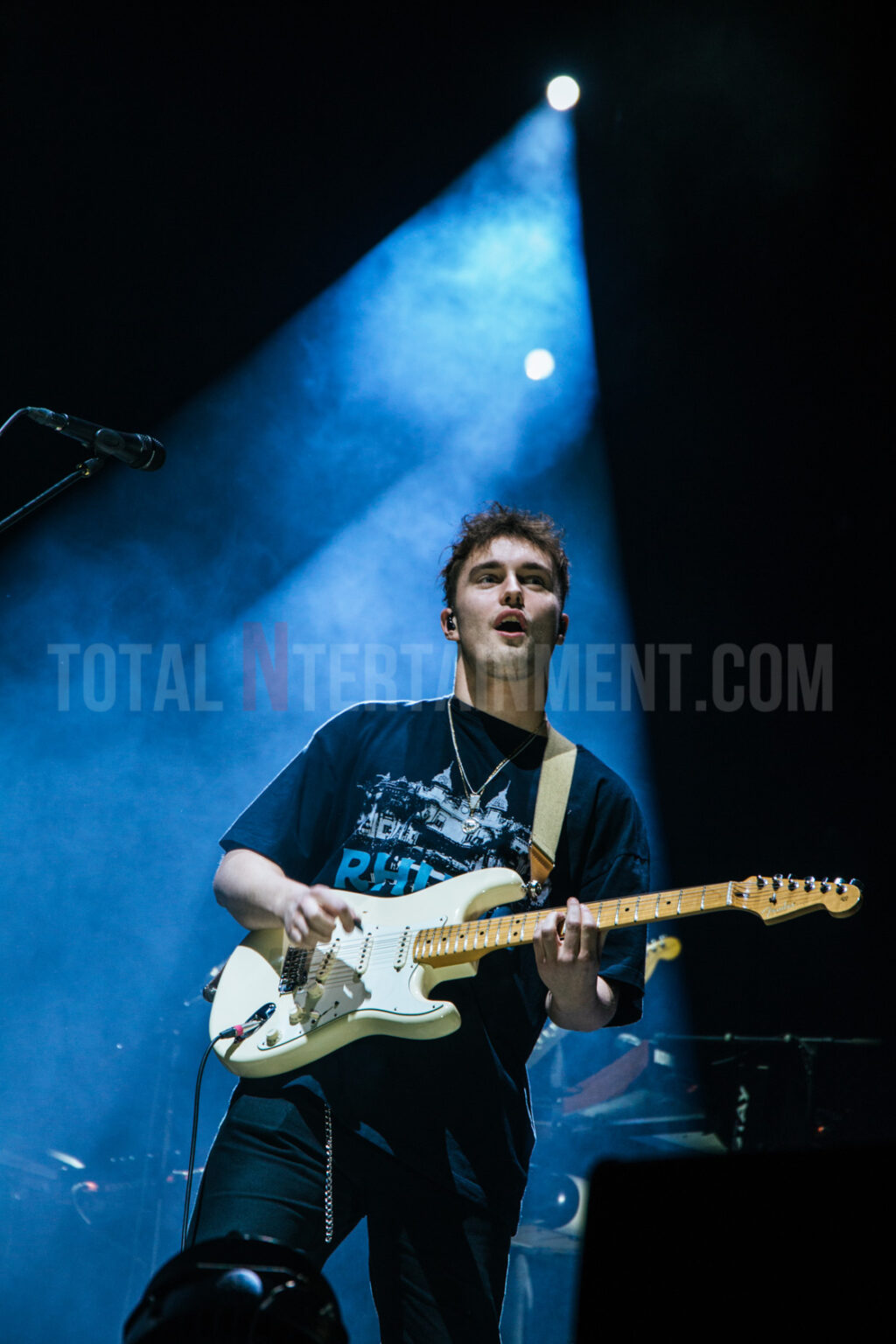 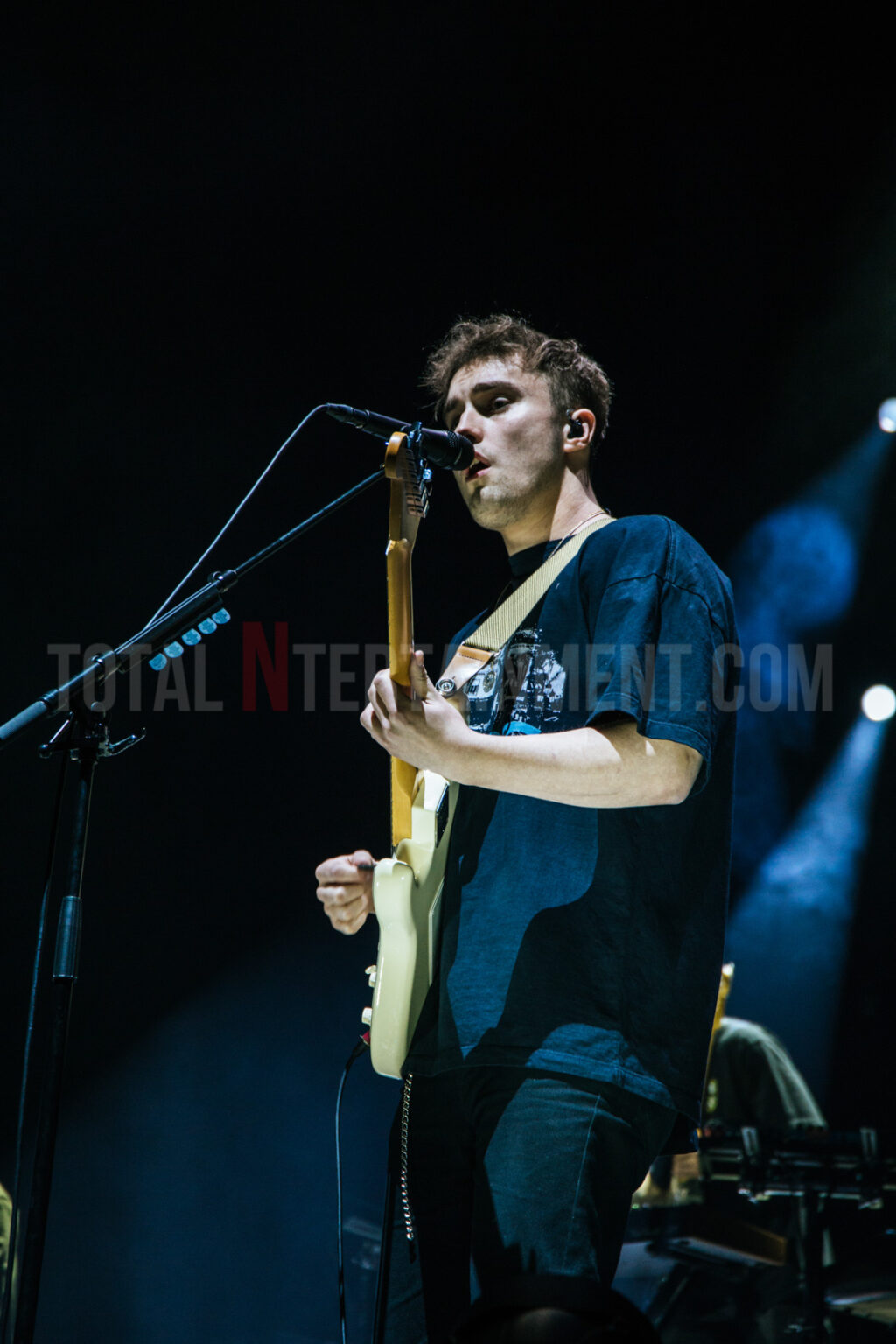 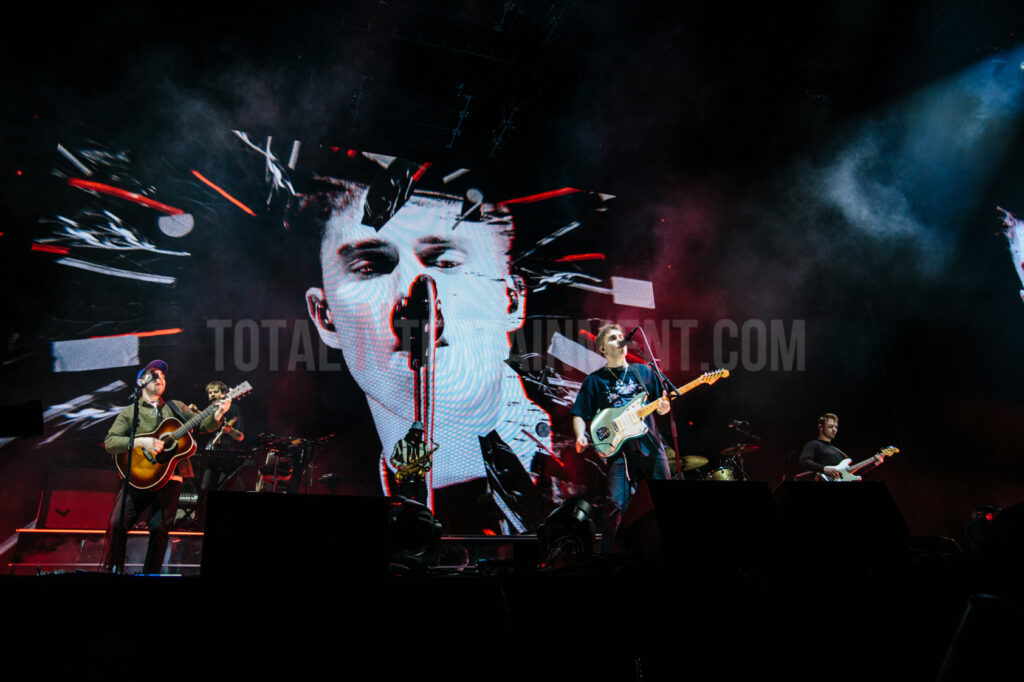 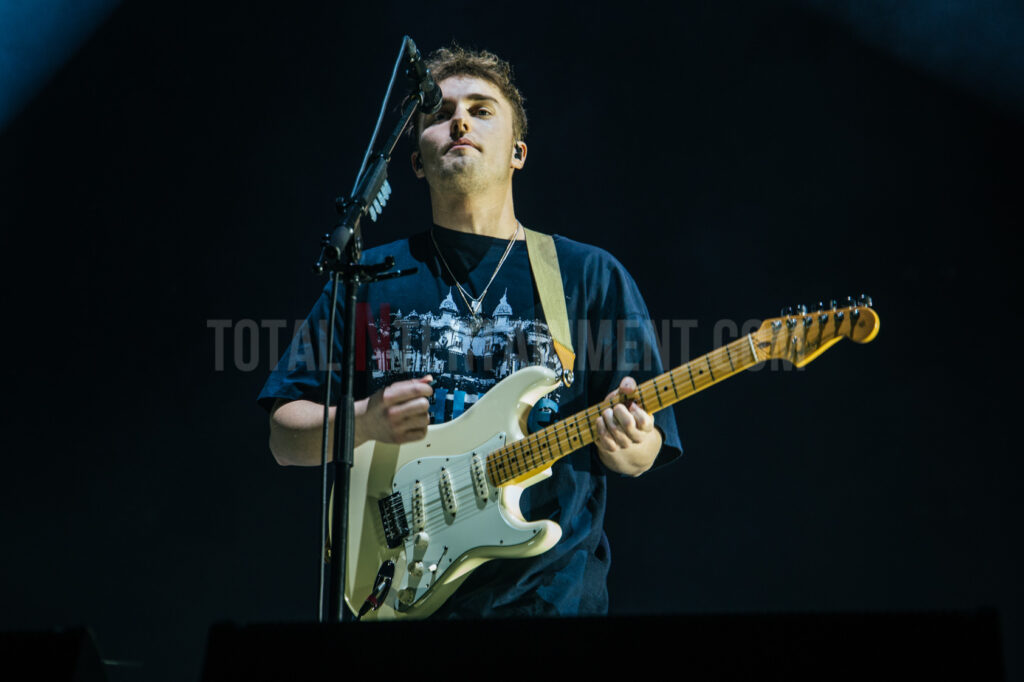