This year Steve Royle wowed the judges with his comedy juggling skills and Nabil Abdul Rashid was Alesha’s Golden Buzzer act and will be appearing in this year’s live semi-finals. Lee Ridley (aka Lost Voice Guy) was the first comedian to win Britain’s Got Talent in 2018, the year before magician Ben Hart made it to the final with his outstanding close-up magic skills. 2017 Golden Buzzer act Daliso Chaponda will compere the evening.

Lee Ridley (aka Lost Voice Guy) is the first stand-up comedian to use a communication aid. He made his first stand-up appearance in February 2012. He has performed for the Duke and Duchess of Sussex on The Royal Variety Show, appeared on Live At The Apollo and the New Year edition of The Last Leg. He also appeared at over fifty venues across the country on his debut UK tour  and his debut book, I’m Only In It For The Parking will be published in paperback in 2021. www.lostvoiceguy.com

Ben Hart has established a reputation for always creating wonderfully alternative magic. At the age of 16 he was awarded the prestigious Young Magician of the Year and is one of the youngest ever members of The Inner Magic Circle. He has starred in Killer Magic, Ben Hart’s Life Hacks Hoax (both BBC3), Now You See It (BBC1), The One Show, Len Goodman’s Partners in Rhyme and countless other TV appearances in the UK and abroad. www.benhartmagic.com 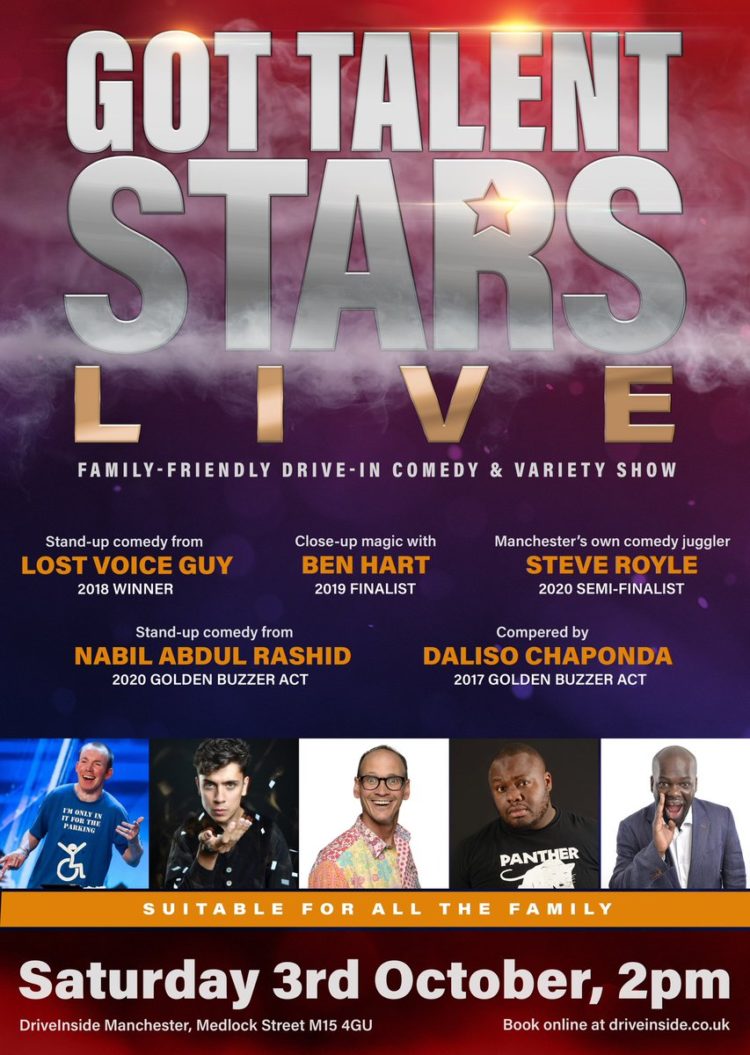 Daliso Chaponda has performed around the world and at the Edinburgh, Melbourne, Singapore, and Cape Town comedy festivals. He is also the writer, creator, and host of the Rose d’Or nominated BBC Radio 4 show Citizen of Nowhere. His work has had over 200 million views online. Daliso is also a prolific fiction writer. He has published science fiction, murder mysteries and fantasy fiction in numerous magazines, and anthologies. He is currently working on his new novel and a children’s book. www.dalisachaponda.com

Steve Royle is an actor, writer, comedian, juggler, and a Gillard Award winning presenter on BBC Radio Lancashire. He is a regular headline act at The Comedy Store and his television appearances include Phoenix Nights, Max And Paddy’s Road To Nowhere, Peter Kay’s Britain’s Got The Pop Factor…,  and Stand-up Britain. He was also featured on the Granada Programme Behind The Scenes and That’s Entertainment and was voted Entertainer of the Year at the inaugural Red Rose Awards. www.steveroyle.com

Nabil Abdul Rashid is an English comedian of Nigerian descent. In 2010, at the age of 25, he became the youngest black comedian to perform stand-up at the Hammersmith Apollo. He has performed at Comedy Cafe, Comedy Store, Jongleurs and Choice FM Comedy Club and was chosen to perform at the premiere of the film of Omid Djalili’s film The Infidel. www.nabilabdulrashid.com