JOE Thomas is enjoying making a meal of What’s In A Name?, the international hit play centred around a Moroccan supper.

“We’re all very excited about this piece,” says The Inbetweeners, Fresh Meat and White Gold star, who will be appearing at the Grand Opera House, York, in the Adam Blanshay Productions touring show from October 8 to 12.

Premiered in Paris in 2010 under the name Le Prènom, the original French version by Matthew Delaporte and Alexandre de La Patellière was turned into a film and subsequently translated into 22 languages too.

“I didn’t see Birmingham Rep’s British premiere in 2017,” says Joe. “It’s kind of an under-the-radar success story, and it’s taken a long time to catch on over here, but we know it’s good because it’s tried and tested elsewhere.”

Jeremy Sams wrote and directed the Birmingham Rep production and is at the helm once more for the debut British tour. “It’s good to come to a script as an actor where you can let the script speak for itself, rather than scratching around for laughs that aren’t there,” says Joe.

That 90-minute script revolves around a particularly awkward family dinner party, re-located to a Peckham flat in Sams’s adaptation. Father-to-be Vincent (Joe Thomas’s role) and his partner Anna are invited to dinner by his sister Elizabeth and her husband, Peter, joined by childhood friend Carl.

The meal is lovingly prepared, the wine carefully selected; humorous exchanges are anticipated, but a sudden revelation of the eye-raising name chosen for Vincent’s and Anna’s imminent child triggers a destructive argument that spirals out of control. No-one holds back as egos, childish resentments and unspoken feelings are relentlessly exposed for the first time.

“It preserves the spirit of the original hit but become very much about class and education too, and so it really suits English sensibilities,” says Joe. “It’s also about repression: how they hold opinions of each other but have held back on them until this evening,” says Joe.

“Dinner parties might appear to be light and frilly on the surface, but behind that front there’s a lot of signalling at work there. Often, people’s behaviour and the language they use with each other will show deeper levels to their personality, about who they think they are, whose side they’re on, and it’s funny that it often emerges around a table.” 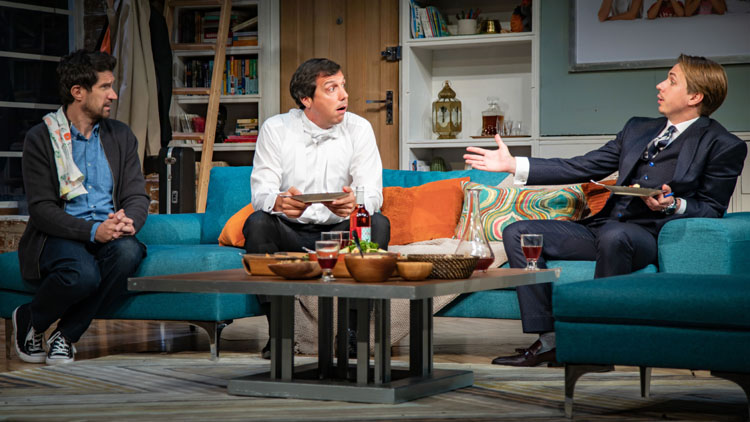 Dinner guest Carl, ostensibly the diplomat caught up in the maelstrom of a family argument, turns out to be the one whose revelation sets the cat among the pigeons. “They start arguing about why even their friendships aren’t working anymore,” says Joe.

“You’d think a dinner party is a safe environment and actually the play doesn’t become a high-concept kitchen-sink drama that leads to the end of the world, but instead they have the self-awareness to say ‘this is just a dinner party and we’ll still be friends at the end’. Throughout the play it makes it funnier because they’re taking grandstanding positions, but it’s not Parliament!”

Joe suggests the play’s universal popularity is rooted in the familiar world it occupies: a family gathering. “We’re all attuned to the small differences to the way it ought to go,” he says. “We can see quite quickly when someone takes umbrage or someone says something that doesn’t go down well.

“When Vincent reveals the baby’s name [Adolphe, named after a French novel, he claims], it’s designed to lead to an argument. It’s a custom-built little bomb that he’s decided to detonate, but it then takes a sideways step.

“A lesser play would descend into a row about Nazis and would become one-note, whereas this one moves laterally. Vincent is being deliberately provocative, but at that point it goes on to become a general discussion.

“The other thing I like is that it’s not just about the substance of the argument but the way they are arguing, like Carl never saying anything opinionated and everyone challenging him about that, but often that’s because he feels embarrassed so he doesn’t join in.”

Joe notes how “little side fires keep starting” as the argument “gets up a head of steam and snowballs, but by the finale nothing terrible has happened, and that’s the nice thing.”

Comparing What’s In A Name’s comedic style with his early days of student comedy, 35-year-old Joe says: “I did a lot of live comedy. We were doing sketch comedy and I was really drawn to narrative comedy and to intelligence-based humour, where it was quite wordy. 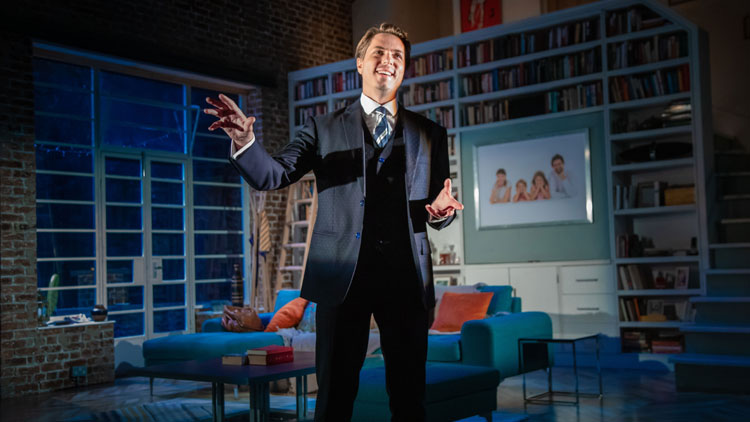 “Thinking back to how we spoke to each other, we’d get into spats, and the way they argue with each other in this play reminds of that, showing how people get offended by quite minor things.”

There are always topics that we know not to discuss with certain people, says Joe, “but sometimes you wade in and wish you hadn’t”. “When alcohol is involved, things flare up, and there are code words that come into play in moments when you realise this is the time to stop talking, but in this play everyone is up for a fight, even about petty stuff, so they all pile in, though at first there were all reluctant to do so…though maybe we should all do that more often!”

Joe has “always been of the opinion that the English are the most repressed people in the world and have always taken pride in that characteristic”. “That’s the reason that the English language has the most words, as we need all those words to avoid being direct.

“If you try to translate it into another language, you realise how much we dance around things,” he says.

“In this play, they’re educated people who like the sound of their own voices and are quite happy to enter into a debate, as they’re intellectuals, so they can separate what they say from their emotions.

“But once they’re angry, vulnerability shows through as their intellectual enamel is chipped away and the raw nerve underneath is revealed. In France, that gives way to aggression; in England it leads to oppression.”