Gender-fluid, playful but built on classic songwriting, Sundara Karma have established themselves as a singular new British rock band. The band set themselves apart with frontman Oscar Pollock’s unabashed lyrics, which delve into the disparities of post-adolescent existence and confront the bigger questions in life. Matched with a blend of up-tempo melodies and heart on your sleeve attitude, it is an irresistible combination.

Ferris & Sylvester are songwriters with clear references in their catchy setup to mid-60s Greenwich Village and, combined with their meatier blues tones, the pair sit somewhere between Jack White and First Aid Kit. In 2018, the duo released their highly anticipated EP Made In Streatham which they self-produced in their South London flat. Released through their own label Archtop Records, the EP has clocked up millions of streams and received widespread praise across the board.

Electric Enemy make music with a message that is as powerful as the guitar-driven sound of Muse, Queens Of The Stoneage and Panic at the Disco.

Sub Pacific are one of the Isle of Wight’s most talented alternative rock bands. Their latest single, Can You, features infectious hooks and captivating lyrics, creating hype since its release on Spotify.  Having won the Wight Noize showcase, the boys are ready to take the UK by storm this summer

As part of M People and thanks to a successful solo career, Heather Small has enjoyed worldwide success and became one of the seminal British voices of the 90s. Hits including Moving On Up, One Night in Heaven, Search for the Hero and Proud will make for special singalongs once she takes to the Big Top stage on 13th June.

With instantaneous, festival ready, euphoric guitar anthems in spades, Sea Girls have set their sights on 2019 as theirs for the taking. Named as one of the BBC’s Sound Of… artists for 2019, they’ve drawn support from Radio X, NME, Time Out, The Independent and more. With their debut album released this year, Sea Girls are bringing to the forefront the pure joy of what a band should be.

Rightfully christened as both “The Hottest Band of 2018” and simply “the” group of the year, by the English music press, Canadian fashion-rock trio Palaye Royale are a shot of adrenaline into the modern musical landscape. Summoning a thrilling spirit, with throwback sonic crunch, visual flair, and reckless live performances, they have quickly earned a legion of obsessive cult-like fans, lovingly dubbed Soldiers of the Royal Council.

Bang Bang Romeo are a force to be reckoned with. The talented UK band, fronted by one of the most remarkable vocalists and performers of recent times – Anastasia “Stars” Walker -, are a young propelling force for female fronted bands and a strong and open voice for the LGBTQ+ community. Frontwoman Stars is hailed by many in the music industry as having a ‘once in 20 years voice’ and the band’s unrivalled larger-than-life performances are driving audiences wild up and down the country. 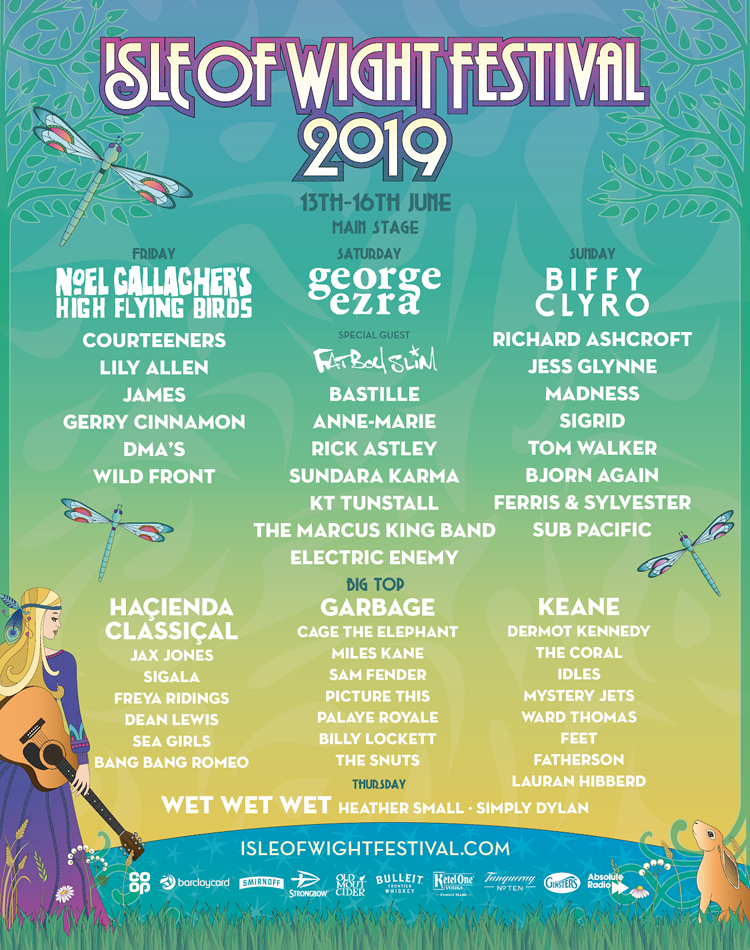 Piano man Billy Lockett grew up in Northampton and secured early support from Radio 1 which led to tour support slots with Birdy, Lana del Rey and KT Tunstall. Now a few years down the line, he’s added Lewis Capaldi and Electric Light Orchestra to his list of support slots and is heading out on his own tour this year.

Already a cult sensation in their Scottish homeland, THE SNUTS have built their burgeoning reputation on the road, with shows growing in scale and style since they sold-out their first headline date at Glasgow’s King Tut’s in 2017. Spending much of last year spreading their riotous rock ‘n’ roll gospel further afield, with a succession of major festival performances including Reading & Leeds, Benicàssim, TRNSMT and Belladrum, their live shows inspire a frenzied audience reaction and mass singalongs.

The upwards trajectory of Fatherson’s blossoming career serves a heartening reminder that the hype machine is no substitute for talent, authenticity and graft. This is a band afforded no shortcuts to get where they are today, a success story built on word-of-mouth conversions. Attend any Fatherson gig and you’ll find a room echo with lyrics being sung back en masse by adoring fans. They play The Isle of Wight Festival on Sunday 16th June.

Humorous, infectious and charismatic in equal measure, Isle Of Wight’s rising sensation Lauran Hibberd is solidifying her status within the UK’s emerging indie elite. Buzzing across the airwaves with BBC Radio 1’s Annie Mac, Huw Stephens and Jack Saunders all throwing their support behind the young musician, Lauran’s witty, off-kilter approach continues to attract glowing praise from the online community (The Line Of Best Fit, Clash, The 405) and welcome comparisons to contemporaries including Courtney Barnett and Phoebe Bridgers.

The Isle of Wight Festival takes place 13th – 16th June at Seaclose Park, Newport. Last year fans celebrated the 50th Anniversary of The Isle of Wight Festival. The first festivals in 1968, 1969 and 1970 put the event on the map for its world renowned, iconic performances from artists such as The Doors, The Who and Jimi Hendrix. The event was successfully relaunched in 2002 to become the first major festival in the UK calendar, and one of the most exciting weekends of the summer. It continues to build on its proud heritage and has featured show-stopping headliners such as David Bowie, Foo Fighters, The Rolling Stones, Paul McCartney, Jay-Z, Coldplay and Fleetwood Mac since its reincarnation in 2002.

Tickets for The Isle of Wight Festival 2019 are on sale now from www.isleofwightfestival.com