Liverpool’s Fusion Festival is thrilled to announce the final names to complete its 2019 line-up, joining Rudimental who is headlining Saturday 31st August, and Little Mix who top the bill the day after on Sunday 1st September.

Scottish Singer-Songwriter Nina Nesbitt will take to the stage on Saturday. Nesbitt released her critically acclaimed second album ‘The Sun Will Come Up, the Seasons Will Change’ in February of this year. She commented “Can’t wait to play Fusion festival alongside so many amazing acts this year! It’ll be a great way to mark the end of festival season for me. “ – Nina Nesbitt

Also newly added and joining the bill on the Saturday is home talent Anton Powers hailing from Liverpool, the DJ, record producer, remixer & radio presenter is sure to really get the party started.
“Fusion gets bigger and better every year. The reaction when I played last year was incredible, so I was really keen to play again and at a brand new site. The festival is in my hometown as well, so I feel like I know most of the crowd! Bring it on” – Anton Powers

Two new names have also been added for the Sunday; Rising R&B star Mabel has had five top 20 singles, including ‘Finders Keepers’ and 2019’s ‘Don’t Call Me Up’. With her highly anticipated debut album due for release in August, festivalgoers are in for a treat when she performs at Sefton Park. 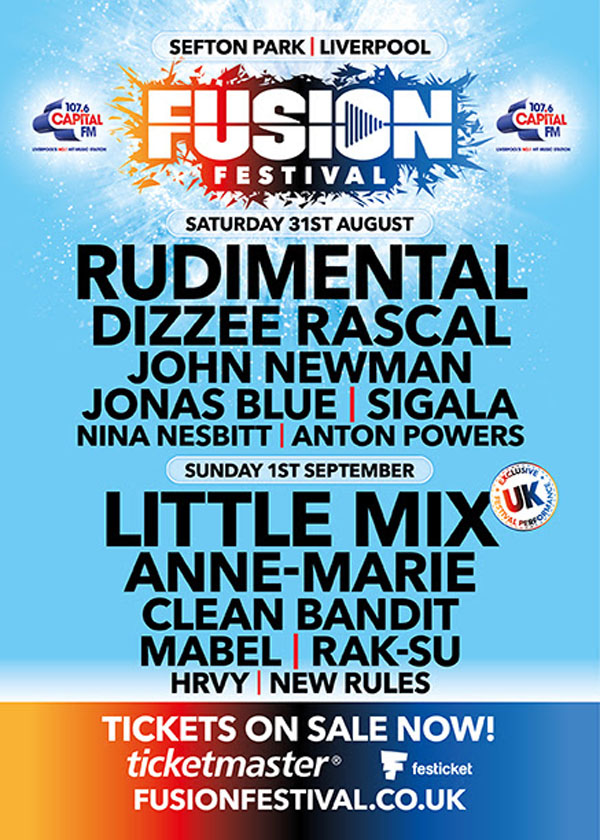 Up and coming boy band trio New Rules complete the bill having already proved to be a viral sensation with their new single‘ Fix Somebody’. They commented:
‘Playing at Fusion is a big deal for us as it’s the first time we’ll be playing at a festival we have previously attended as fans! We can’t wait to play alongside so many amazing artists that we look up to, and all in a city that we love. Excited to see everyone there!’ – New Rules

The weekend festival has expanded and takes place at a new site location for 2019, moving from Otterspool Promenade to a new, larger space in the magnificent Sefton Park.

Tickets for Fusion Festival are on sale with both Weekend and Day tickets available.
Ticket pricing below
Per Day:

Tickets can be purchased from The Official Ticket Store:www.thefusionfestival.co.uk/festival