Renowned as the first place to hear the essential sounds of the year ahead, Live At Leeds returns in 2020 with an impressive line-up combining some of the most exciting names in modern music and the hottest breakthrough bands on the UK music scene. Live at Leeds is your chance to find your new favourite artist in a day of live music across the city.

Previous artists that have appeared at Live at Leeds in the early stages of their careers and gone on to huge achievements include Brits Choice Winner Sam Fender (now headlining arenas and released A number 1 album ‘Hypersonic Missiles’), Pop Sensation Sam Smith, worldwide festival headliners The 1975, online star Freya Ridings, Glastonbury headliner Stormzy, and Ed Sheeran, who recently returned to Leeds for the biggest headline shows in the city since 2006 at Roundhay Park.

Heading up the line-up in 2020 are some of Live at Leeds’ true success stories, led by Aussie Indie rockers DMA’s. Since forming in Sydney in 2012, they’ve garnered critical acclaim in the UK for both of their previously released albums . Hot from supporting national treasure Liam Gallagher on his headline UK tour this month they will return to the festival on the back of a hotly anticipated third album planned for release next year. A favourite with the Live at Leeds crowd, their set is bound to be an unmissable spectacle and a highlight of the day.

Following of the most hyped debut albums of the last few years Pale Waves will return to Live at Leeds as triumphant headliners. The label-mates and tour-mates of The 1975 have been making a name for themselves as one of the most exciting alternative bands of recent years. Their debut album ‘My Mind Makes Noises’ was full of hits, including “Television Romance’ and ‘There’s a Honey’ and Live at Leeds will follow a host of sold out UK tours, an iconic Glastonbury performance in 2019 and tours with artists like Halsey and Muse.

Easy Life are arguably THE breakout artist of 2019, setting festival stages across the country alight throughout the summer with their mishmash of jazz, hip-hop, funk and punk that sounds like nothing done before . The Leicester 5-piece are being added to Live at Leeds following their recent sell-out show at Leeds University and have a much-anticipated EP Junk Food dropping in 2020. Make sure you catch them at Live at Leeds, they are set to get bigger and bigger from here on out!

Also leading the charge of new names, making his Live at Leeds debut is Ezra Furman. Bringing his unique brand of indie rock from across the pond, this cult artist gained a mainstream following composing the soundtrack to the hit Netflix series ‘Sex Education’ in 2019. He will appear at the festival in support of his fourth solo studio album ‘Twelve Nudes’ which was released in August 2019 on Bella Union.

Live at Leeds is well known for giving new artists their first show in the city before they go on to conquer the world and 2020 welcomes a new crop of exciting artists arriving in Leeds for shows early in their careers.  These include Aussie fuzz-pop duo Hockey Dad, Norwegian punk art rockers Pom Poko, indie-pop bands FEET and Kawala, Newcastle rockers The Pale White, and alt-synth act W. H. Lung.

Over 55 acts are confirmed on this first announcement, including singer-songwriter James Smith, Glaswegian Art-rockers Walt Disco, and a host of exciting new artists including Jazz-soul producer and Dance to the Radio signee Leo Cosmos, alt rockers Leodis and haunting dream-pop band Artio.

The starting gates to the summer ahead, Live at Leeds 2020 soundtracks a city soaring with the best in new and now.

‘We’re ecstatic to welcome back DMA’s and Pale Waves to Live at Leeds as headliners. Pale Waves caught everyone’s attention headlining the Brudenell in 2018 preceding their rapid rise – and DMA’s have gone on to sell out the Academy since their last appearance at the festival. Both bands really showcasing what LAL is about. I’m personally excited to see Ezra Furman make his debut at the festival and Marika Hackman return off the back of her brilliant new album.  As always there’s a real focus on emerging talent, with DYLAN, FEET and NOISY all being particular highlights, and a strong lineup of local artists including THE LOOSE CUT, VENUS and LEO COSMOS. From established headliners to brand new artists there’s something for everyone to get stuck into.’ 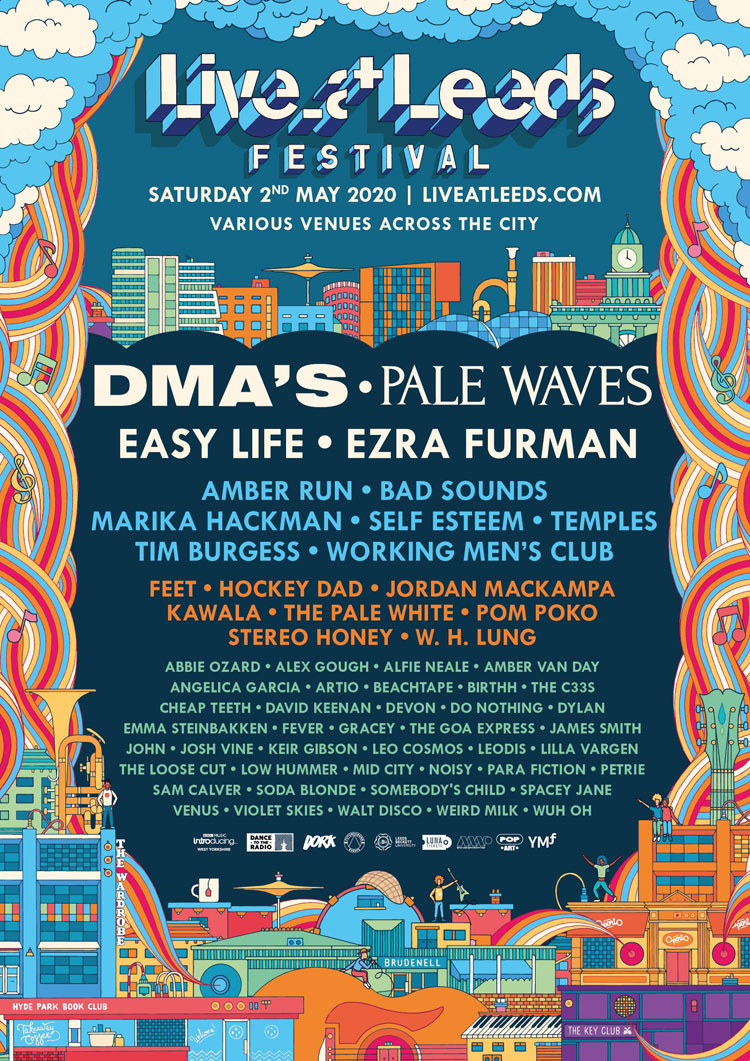