Renowned as the first place to hear the essential sounds of the year ahead, Live At Leeds returns with over 40 acts added to the line-up in May that includes some of the most exciting names in modern music and the hottest breakthrough bands on the UK music scene. Live at Leeds is your chance to find your new favourite artist in a day of live music across the city.

Previous artists that have appeared at Live at Leeds in the early stages of their careers and gone on to huge achievements include Brits Choice Winner Sam Fender (now headlining arenas and released a number 1 album ‘Hypersonic Missiles’), Pop Sensation Sam Smith, worldwide festival headliners The 1975, online star Freya Ridings, Glastonbury headliner Stormzy, and Ed Sheeran, who recently returned to Leeds for the biggest headline shows in the city since 2006 at Roundhay Park.

Joining a line-up today that already features DMA’s, Pale Waves, Easy Life and Ezra Furman are London’s SHAME, the band that rose to prominence off the back of album ‘Songs of Praise’ released in 2018 and featuring 6music favourite ‘One Rizla’.

Part of a rising alternative indie scene including Idles and Fontaines DC, Shame come to Live at Leeds following final studio sessions for their sophomore record.

Ahead of the release of their hugely anticipated sixth studio album ‘A Billion Heartbeats’ due to drop later this year, Mystery Jets will be setting the stage alight once again having had their Live at Leeds debut back in 2016. Set to redefine themselves with their latest release, the London based indie sextet are famous for hits including ‘Two Doors Down’ and ‘Young Love’ and are exploding on to the line-up with a legacy dating nearly 15 years. 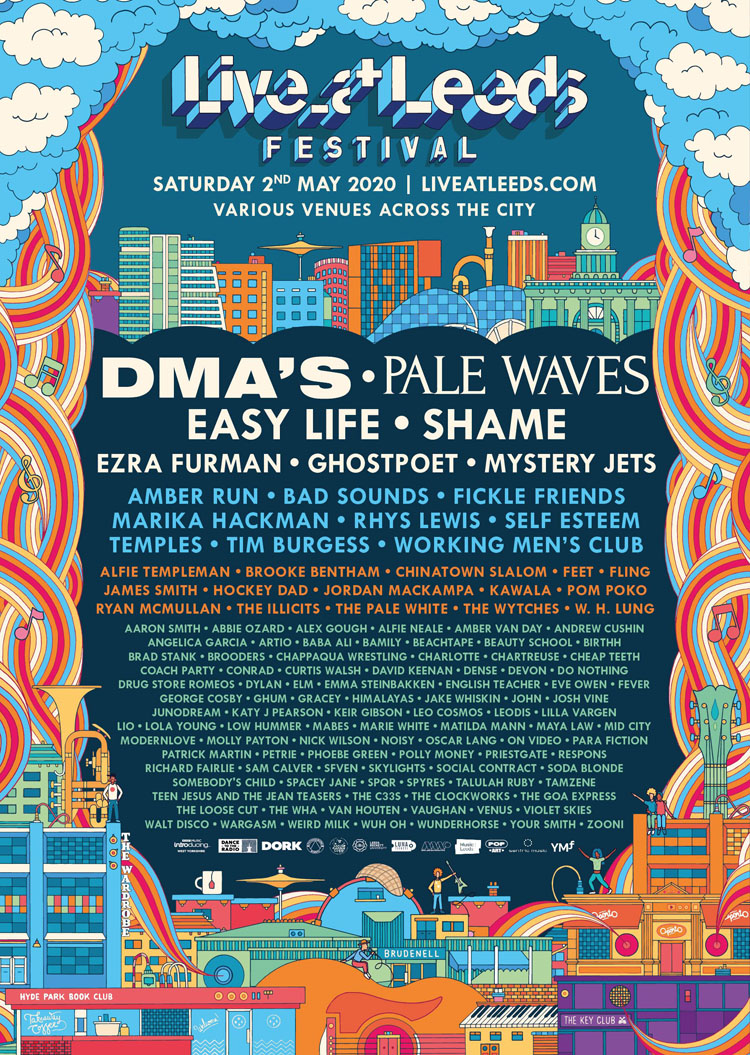 Also taking the line-up by storm is Ghostpoet. The two-time Mercury Prize nominee will be seducing the Live at Leeds crowds with his ambient alternative hip-hop once more having performed at the festival in 2016. The South-London born artist doesn’t shy away from exploring his personal observations on love and life in his music. A characteristic that has gained him praise and popularity over a decade of steady graft his set is bound to be a memorable one and highlight of the day.

Live at Leeds is well known for giving new artists their first show in the city before they go on to conquer the world and this announcement welcomes a new crop of exciting artists arriving in Leeds for shows early in their careers.  These include Dirty Hit’s very own bedroom pop sensation Oscar Lang, The Illicets who are selling out shows across the country with their electric live performances, Junodream who recently starred in a ‘Live at Leeds Ones to Watch’ show and the effortlessly charming and warm sounds of Manchester based duo Chappaqua Wrestling.

This year will see new partners join the Live at Leeds family with Abbie McCarthy (Radio 1) hosting her ‘Good Karma Club’ as a stage at the festival as alongside other established partners such as Music:Leeds, Yorkshire Music Forum and BBC Introducing West Yorkshire

The starting gates to the summer ahead, Live at Leeds 2020 soundtracks a city soaring with the best in new and now.

Tickets for Live At Leeds 2020 are on sale now