Reading & Leeds Festivals today reveals Rage Against The Machine and Stormzy as its 2020 headliners alongside already announced Liam Gallagher – plus over 90 names set to play at Reading’s famous Richfield Avenue and Leeds’ legendary Bramham Park this August bank holiday weekend (28-30th). Tickets are on sale from 9am Thursday, available here.

Rage Against The Machine formed in 1991, rising to acclaim with their fiercely anti-establishment sound merging hip hop, punk and thrash. To date, the band have sold over 16 million records, and are one of the loudest voices in modern music. In times of political hardship, Rage Against The Machine have never been afraid to speak their minds or point the finger at injustice, their previous Reading and Leeds performances have gone down in history – and this year’s headline slot will be no different. With timeless singles such as Killing In the Name and Guerrilla Radio in their repertoire that still resonate with the masses in 2020, the Los Angeles legends are set for an unmissable performance.

Multi award-winning musician Stormzy is the name on everybody’s lips at the moment, and his performance on this year’s Reading & Leeds main stage will be one for the history books. A showman like no other, his remarkable ascent has been accompanied by his honest and relatable character. Known for evolving the underground musical landscape, as well as being a perennial political agitator, Stormzy is a true spokesman of black empowerment and social activism. Last years critically acclaimed #1 album Heavy Is The Head is testament to this; a record that is home to a necessary and important dialogue that’s equally fiery as it is refreshingly vulnerable. With a flawless show that is decadent, unpredictable, and second to none, his well-earned headline slot at this year’s Reading and Leeds will be colossal.

All-round legend Liam Gallagher was announced as a Reading & Leeds headliner back in November. Having brought an epic show to 2017’s Reading & Leeds festivals, his appearance on the main stage this summer will no doubt be BIBLICAL. Liam’s rise has been stratospheric in the past 12 months; his documentary As It Was, a second solo album Why Me? Why Not, and a triumphant sold out UK tour.

Northampton rapper slowthai rose to fame with last year’s scathingly honest debut Nothing Great About Britain, gaining notoriety as one of the UK’s most compelling MCs and the voice of a generation. He’s been praised by the likes of R&L headliner Liam Gallagher, and his performance at this year’s festival will be a spectacle of sweat, charisma and energy.

Also joining the line-up is Scottish singer songwriter Gerry Cinnamon. His inimitable live shows are infamous for their wild atmosphere, and festival goers can expect a multitude of special sing along moments. He’ll be joined by Two Door Cinema Club, with their bold blend of alternative pop, dance beats and unforgettable riffs. 2019 was the year of North Shields singer songwriter Sam Fender with his brilliantly cathartic and honest debut album Hypersonic Missiles, and with his appearance at this summer’s Reading & Leeds shows there’s no sign of him slowing down any time soon. Also appearing are Courteeners whose critically acclaimed release More. Again. Forever. recently became the band’s seventh album to reach the Official UK Album Chart Top 10. Last year they sold out their own 50,000 capacity show at Heaton Park in Manchester and headlined a number of major festivals across the country. Festivalgoers can look forward to hearing such hits as Not Nineteen Forever, Are You In Love With A Notion?, Modern Love and countless others in August at Reading & Leeds. Elsewhere, the brilliantly ambitious Irish singer songwriter Dermot Kennedy who made a remarkable impact with his #1 debut album Without Fear in 2019 joins the line up, as well as Rex Orange County, who recently released his acclaimed third album Pony to subsequently selling out three phenomenal shows at Brixton Academy. Found What I’ve Been Looking For hit maker Tom Grennan, and ONR – the brainchild of singer-songwriter Robert Shield – are also announced. Manchester born, 20 year-old MC Aitch is one of the biggest success stories in the last year. With a BRIT Award nomination, his infectious energy and unrivalled flow cement him as a force to be reckoned with at this years Reading and Leeds. 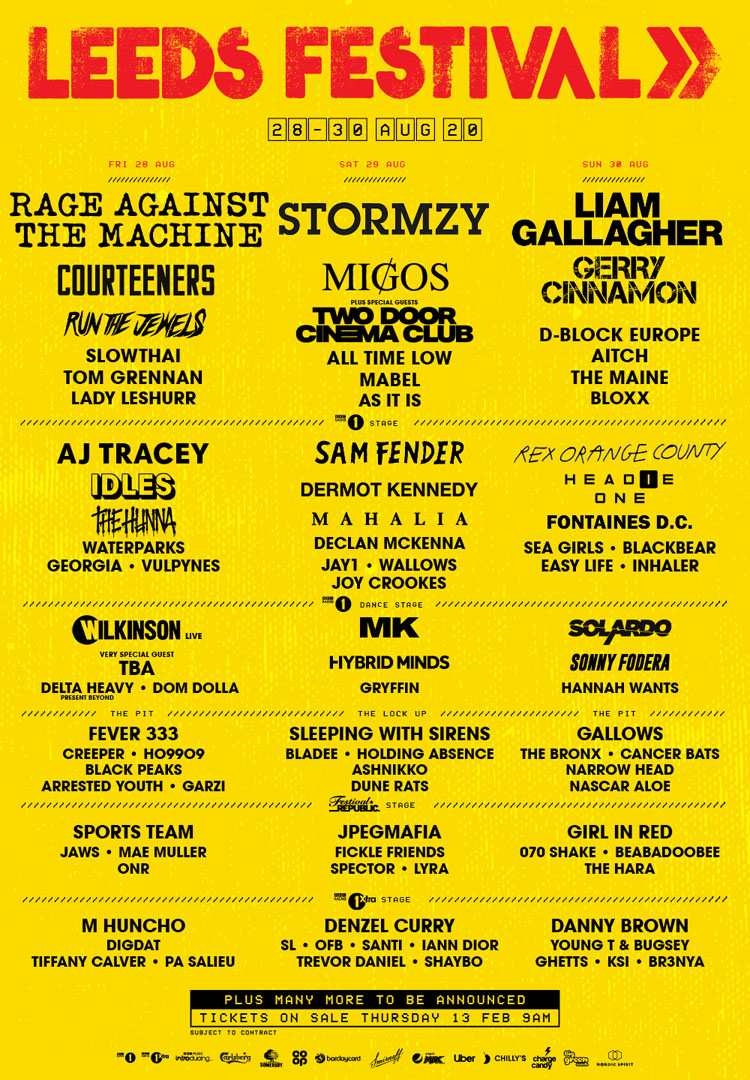 Atlanta Bad & Boujee trio Migos are an illustrious name in modern hip-hop, achieving multiple #1 spots in US single and album charts, alongside a plethora of awards. Heavily praised by the likes of musical guru Donald Glover (Childish Gambino), their set at Reading & Leeds will be monumental. D-Block Europe are a collective of artists led by Young Adz and Dirtbike LB that are taking the trap world by storm. Last year’s mixtape Street Trauma cemented the duo as a formidable force in UK music that is sure to get Reading & Leeds moving. Also appearing are Grammy-nominated US hip-hop super duo Run The Jewels, who create heavy hitting beats, scorching bars and braggadocio one-liners with social relevance.

Ladbroke Grove rapper AJ Tracey has catapulted to the forefront of the UK rap scene and will make his grand return at Reading & Leeds following a standout performance at 2019’s festival. Joining him is Tottenham’s Headie One, known for his unwavering vocal flow with stylings of trap and drill. Fresh from releasing her brilliant debut LP Modus Vivendi, 070 Shake has one of the most unique voices in contemporary rap and is set for her biggest year yet. Swedish rapper Bladee fuses a smorgasbord of musical styles that bring a wide range of emotions to his electric performances. Self-proclaimed as the New Sid Vicious, North Carolina native Nascar Aloe brings a hard-hitting mix of his hero’s punk energy mixed with raw trap beats that will have the mosh pits bouncing. Michigan rap guru Danny Brown is also announced, alongside 23-year-old multi-talent rapper, singer, producer and songwriter Ashnikko, accelerating South East London drill artist DigDat and Birmingham freestyler Lady Leshurr.

Pop punk heavyweights All Time Low will make their electrifying return at Reading & Leeds, alongside IDLES, the creators behind one of the most necessary dialogues and important albums in recent years, Joy As An Act Of Resistance. Toronto hardcore punks Cancer Bats are back with their chaotic and pit-inducing tunes. Fronted by Jason Butler, FEVER 333 will bring a pulverizing hybrid of hip-hop, punk and activism that doesn’t play by the rules to both Reading & Leeds. ‘God’s Favourite Boyband’ Waterparks are heading back to the festivals, with ferocious Watford DIY punks Gallows, hardcore punk group Ho99o9 and anthemic punk from crowd-favourites The Bronx.

Reading & Leeds are also excited to confirm appearances from Declan Mckenna, who is taking the UK by storm ahead of his second album release Zeros later this year, and his appearance at this year’s Reading & Leeds is hugely anticipated. At just 19 years old, Beabadoobee has built her huge, Gen-Z fan base with her flawless output of confessional bedroom pop songs and DIY aesthetic that is sure to get the crowd going. She’ll be joined by fellow BBC Sound Of nominees Sea Girls, who kickstarted this year with the release of their contagious new single Ready For More, alongside Leicester’s Easy Life who blur the lines between indie and R&B, and pop-punk unit hailing from Kentucky Arrested Youth. Also set to play are indie revivalists Sports Team, Cali trio and alt pop masters Wallows, London indie pop chaps Spector, and Dublin band Inhaler, who just released their huge new track We Have To Move On. Synth-pop four-piece Fickle Friends fronted by Natassja Shiner, British indie rock trio Jaws, Irish singer LYRA and Reading indie pop 4-piece Bloxx join the line-up.

Dance music fans can expect to see Detroit legend MK take to the stage, with his unique spin on modern house, incorporating elements of New York-style garage with high octane techno. Tech-house duo Solardo will be flying the flag for Manchester’s rich dance music heritage, bringing their insatiable appetite for infectious beats and euphoria to the festivals. Gryffin is a San Franciscan producer, musician and DJ who has worked with the likes of Tove Lo, Years & Years and Maroon 5, his chart-topping melodic house music will be a welcome addition to the festivals. Described as ‘one of the biggest draws in house’ by MixMag, Reading & Leeds are also excited to play host to Australia’s Sonny Fodera who is renowned for unforgettable DJ sets featuring club bangers such as One Night. He’ll be joined by South West London dance guru Wilkinson, who has countless club anthems to his name such as Afterglow, Half Light and Dirty Love, Birmingham house heroine Hannah Wants, London drum n bass re-definer duo Hybrid Minds, BBC 1Xtra DJ and tastemaker Tiffany Calver, British drum n bass duo Delta Heavy presenting Beyond and Australian house producer Dom Dolla.

With hundreds of acts set to play, Reading & Leeds will again be the ultimate festival weekend of the summer – defining and celebrating the sounds of modern ground-breaking music, as well as a world-class comedy line up.

Fans can be the first to hear further line-up announcements, artist news and much more by signing up to the newsletters at www.readingfestival.com and www.leedsfestival.com or via the official Reading & Leeds Festival app, available to download now on Android and iOS.

General tickets on sale from www.readingandleedsfestival.com