Following last year’s Rewind North & South going ahead ‘against all odds’ we are thrilled to announce Rewind 2022 is back … and this year, following a two-year hiatus, so is Rewind Scotland celebrating a belated 10th Anniversary.

Making a welcome return to all the Rewind Festival dates is none other than Holly Johnson, bringing his hit packed catalogue of songs, including Relax, Two Tribes, Power of Love, Love Train, Americanos and many more, to all three closing Saturday night shows.

Sunday night in Scotland will by headlined by the legendary Wet Wet Wet, making their Rewind Scotland debut. Wet Wet Wet have sold more than 15 million singles and albums to date, featuring in the official UK charts for over a colossal 500 weeks and their albums have been certified 20 x platinum in the UK alone.

Sunday nights in Rewind North & South will be The Human League who have had five albums and 15 Top singles and had sold over 20 million records worldwide including hits Don’t You Want Me, Mirror Man,  (Keep Feeling) Fascination, Human and Tell Me When.

Rewind Scotland will open with a unique show celebrating over 50 years since the formation of one of the world’s greatest rock bands – Queen. Queen Symphonic features a full symphony orchestra, a fantastic rock band and four soloists from the international productions of the musical We Will Rock You performing some of Queen’s greatest hits including We Will Rock You, Bohemian Rhapsody, Radio Ga Ga, We Are The Champions, A Kind Of Magic and many more. This set was one of the highlights of last year’s Rewind bringing the crowd to a roaring frenzy!

On each Saturday the main stage show will be hosted by The Doctor (Dr. & The Medics) and each Sunday by Pat Sharp (Greatest Hits Radio.) 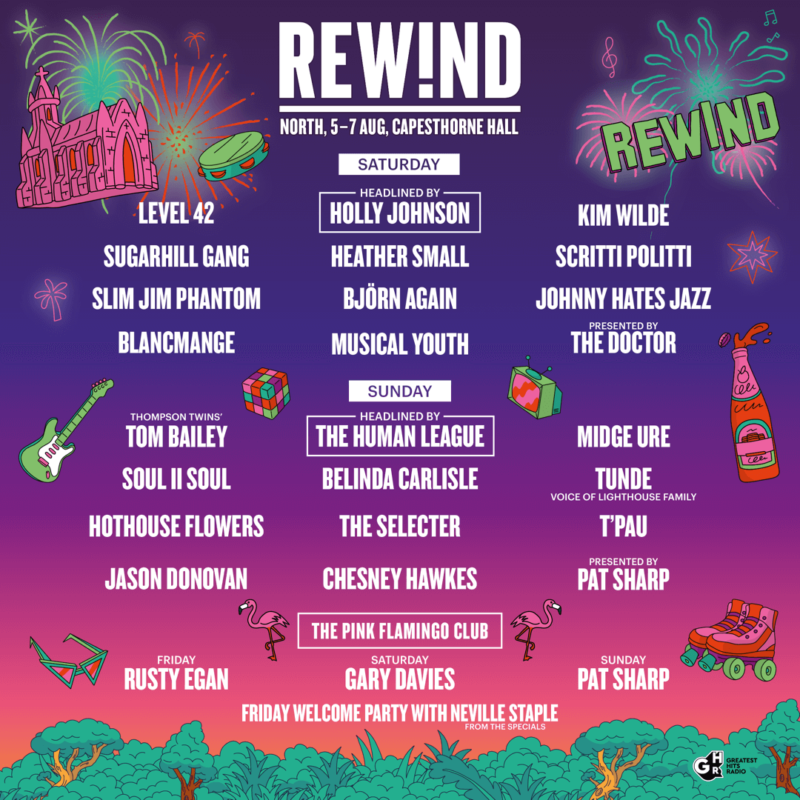 And if all this isn’t enough, Rewind celebrates the return of The Pink Flamingo Club in the Big Top, an 80’s themed nightclub, with headline DJs Gary Davies, Pat Sharp & Rusty Egan spinning all your favourite 80’s tunes to keep the party atmosphere going well into the night! On Fridays 22nd July & 5th August Neville Staple (The Specials) will also join the party will a special band set in The Pink Flamingo Club and on Friday 19th August he will host the Riverside Stage welcome party.

Sunday nights will conclude with a fantastic firework display – what better way to end the weekend than with the skies being lit up with a stunning display.

And there’s more!!! Rewind Festival weekend is not just about who is performing on the main stage, but an event including other exciting entertainment such as Silent Disco, funfair rides, kid- zone with entertainment for the little Rewinders, shops & stalls for jewellery, t-shirts, food & drink.

And if “love is all around” & you fancy tying the knot “come on and let it show” in full Rewind Festival style in the Inflatable Church! Yes, the big church of rubbery love is once again rockin’ 80s vibes.

And for those wanting to make a whole weekend of it there’s the general camping area – the perfect place to pitch your tent! Or for those not wanting a night under canvas there are Campervan or caravan pitches and with shower and toilet facilities available within the campsite everything is only ever a short walk away.

This year Rewind are delighted to have joined forces with Greatest Hits Radio for 2022. Andy Ashton, Content Director, Greatest Hits Radio said: ‘Greatest Hits Radio is delighted to be the Official Radio Partner for Rewind 2022. As the home of the biggest songs of the 70s 80s and 90s, Rewind is the perfect partnership for us, and we are as excited as our audience are about these incredible line ups and with our very own Martin Kemp and Pat Sharp set to perform; The Good Times sound like this.’

Yes, this year is bigger than ever and an event for us all to look forward to in this bright & hopeful 2022!

You can purchase tickets from 9am on Friday 28th January and secure all your summer 2022 festival extras such as Glamping, Moorings, V.I.P, When Nature Calls, Campervans, Caravans etc. from: