Since bursting on to the stage as the youngest member of Take That in 1990 and then going solo in 1995, Robbie Williams has been at the top of his game for nearly 30 years, and has become a national treasure.

One of the most decorated artists around today, he has six of the top 100 best-selling albums in British history with 77 million albums worldwide, 14 Number 1 singles and won a record 18 BRIT Awards – more than any other artist in music history.

Currently appearing as a judge on The X Factor, Robbie is gearing up for a busy 2019. As well as headlining Hyde Park he will play 12 (already sold out) dates in Las Vegas at the Wynn Las Vegas’ Encore Theater, and will release a new album of previously-unheard music directly to his fans with ‘Under the Radar Volume 3’.

Out on February 14th, ‘Under The Radar Volume 3’ – the third instalment of his fan special series – is a unique collection of demos and previously unreleased material from across Robbie’s 21-year solo career compiled for the first time to share with fans.

Robbie Williams will headline Hyde Park for the very first time on the Great Oak Stage on Sunday 14th July 2019 – his only UK open-air show of the year. Tickets go on special fan pre-sale on Monday 3rd December (check RobbieWilliams.com for details), and on general sale on Thursday 6th December.

Barclaycard presents British Summer Time Hyde Park 2019 is back for another year of unique shows and unforgettable music moments, for the 7th year.

Last year continued the tradition of must-see experiences that has seen The Rolling Stones return to Hyde Park, Carole King play her classic album ‘Tapestry’ in full for the first time ever, comebacks for The Strokes and The Libertines, Stevie Wonder play Songs in The Key Of Life and many more.

Shortlisted for Best Festival at the Q Awards 2018

‘Festival of the Year’ at the UK Event Awards 2013

‘Best Use of New Technology’ at the Festival Awards 2013

*general on sale prices may differ 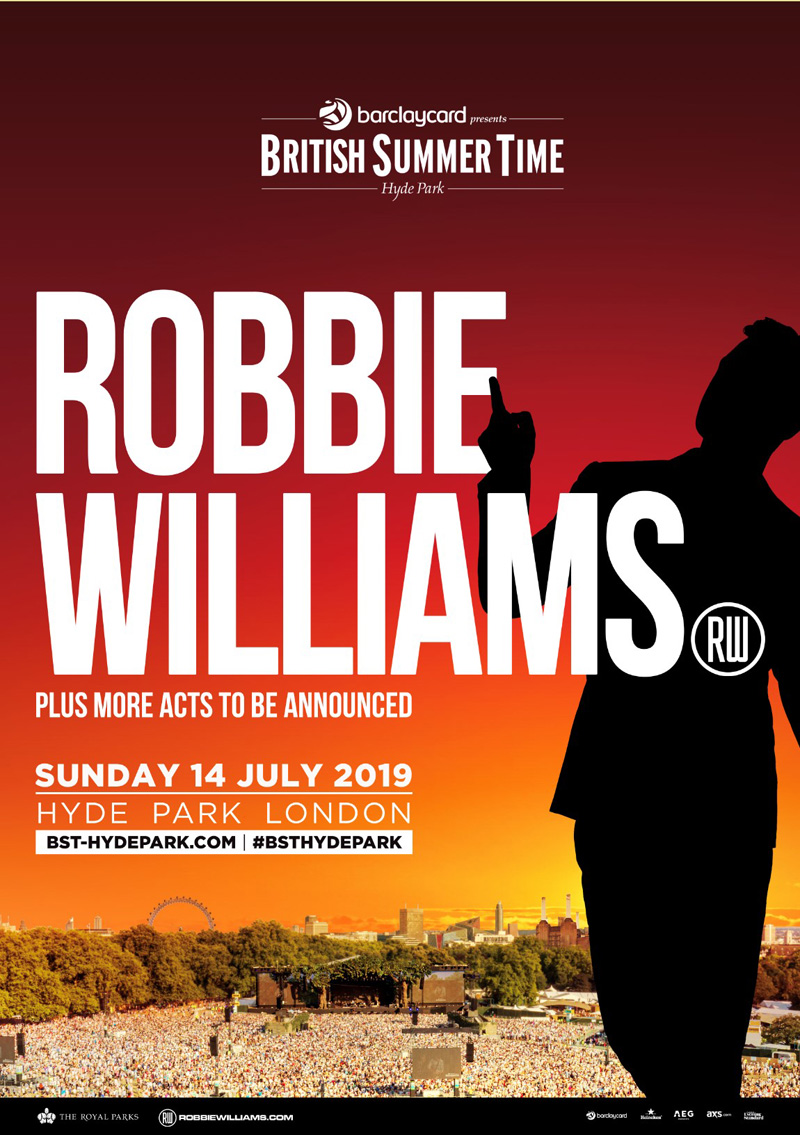