Skip to content
With all government coronavirus restrictions due to the lift on the 19th July, the organisers of SPIKE ISLAND – THE RESURRECTION have confirmed the festival will go ahead as-planned the following weekend.
Scheduled to take place on Saturday 24th July, the one-day outdoor festival is anticipated to be one of the first major music events to take place in post-lockdown Britain.
In a statement, the Spike Island – The Resurrection Team and organisers Lightbulb Festivals say:
“In light of the recent government announcement and their promise that 19th July will be the “terminus” date, we are delighted to confirm that we are proceeding with plans to hold the gig on Saturday 24th July 2021. This has been an incredibly difficult decision given the recent uncertainty, and the team have been doing a lot of hard work behind the scenes to try and make the event go ahead as planned. We are now very confident that our festival will be one of the first to take place in the UK after the re-opening… We are incredibly grateful for all the support we have had for the event, with a staggering number of people keeping hold of their tickets.” 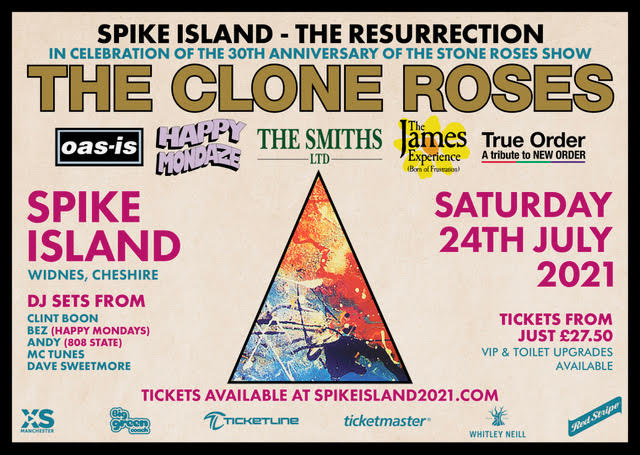 SPIKE ISLAND – THE RESURRECTION is a day of celebrations planned to commemorate the 30th Anniversary of the Stone Roses’ era-defining gig at Spike Island, Widnes.
Originally planned to take place in 2020, the festival is bouncing back this year with over 85% of tickets for the 2021 fixture now sold out.
With its full and original line-up still intact, attendees can expect a number of further exciting surprises to be unveiled in the final weeks counting down to the festival. Stay tuned.
Final remaining tickets are on sale now from: www.spikeisland2021.com
On 24th July, SPIKE ISLAND: THE RESURRECTION invites music fans everywhere to come together at Spike Island, Widnes to rejoice in Roses and resurrections, as live music returns in emphatic style.
“One Love”