Due to headline last year, Truck is thrilled to have Bombay Bicycle Club opening the festival’s main stage. The Ivor Novello winners (Best Album for So Long, See You Tomorrow) returned last year for the first time in four years, after announcing their hiatus in 2016. Their highly anticipated comeback track ‘Eat, Sleep, Wake (Nothing But You)’ was certainly worth the wait, and offered fans and the industry an exciting insight to their fourth Top 10 album Everything Else Has Gone Wrong.

2019 also saw the band’s iconic album I Had the Blues But I Shook Them Loose turn 10 years old; they took to the road and played the album in full on a short UK tour to celebrate, with every show selling out in seconds. Bombay Bicycle Club will play on Friday 23 July, this being their debut performance at the festival – they’re a headliner you definitely won’t want to miss

Saturday will see The Kooks headline the main stage, performing tracks that span over their 17-year career, from 2004’s Inside In/Inside Out, the Number 1 2008 sophomore record Konk, to 2018’s Let’s Go Sunshine. The quadruple-platinum band got together in Brighton when they were still in school, and signed a record deal a mere three months after forming. They’ve since been a household name for indie-rock fans, standing the test of time by releasing five albums across two decades – now the MTV Europe Music winners and BRIT nominees play Truck for the very first time, celebrating the 15th anniversary of their debut album, which has sold over two-million copies to date. Expect to hear indie club anthem ‘Naive’ as well as classics ‘She Moves In Her Own Way’, ‘Always Where I Need To Be’ and ‘Ooh La’. The band say: “We’re so excited to be playing Truck Festival this summer. After last year’s cancellation, we just can’t wait to get back on stage and celebrate with you all properly. It’s gonna be the biggest party ever!”

Closing Truck Festival 2021 are Brighton’s biggest rock duo Royal Blood. Emerging onto the scene in 2013, the BRIT award winners have cultivated a reputation for outstanding live shows, complete with high volume, scuzzy riffs and blustering energy, with accolades from NME and Q to prove it. In January the pair announced the release of their third album, Typhoons, due next month. Arriving seven years after their self-titled debut that earned them a Mercury Prize nomination, the new record will include recent tracks ‘Trouble’s Coming’ and ‘Typhoons’. Expect epic new material, as well as fan favourites, when they hit the Truck stage. Royal Blood say: “We can’t wait to headline Truck Festival this summer. It’s been almost two years since we last played a festival, it’s going to be quite a show.” 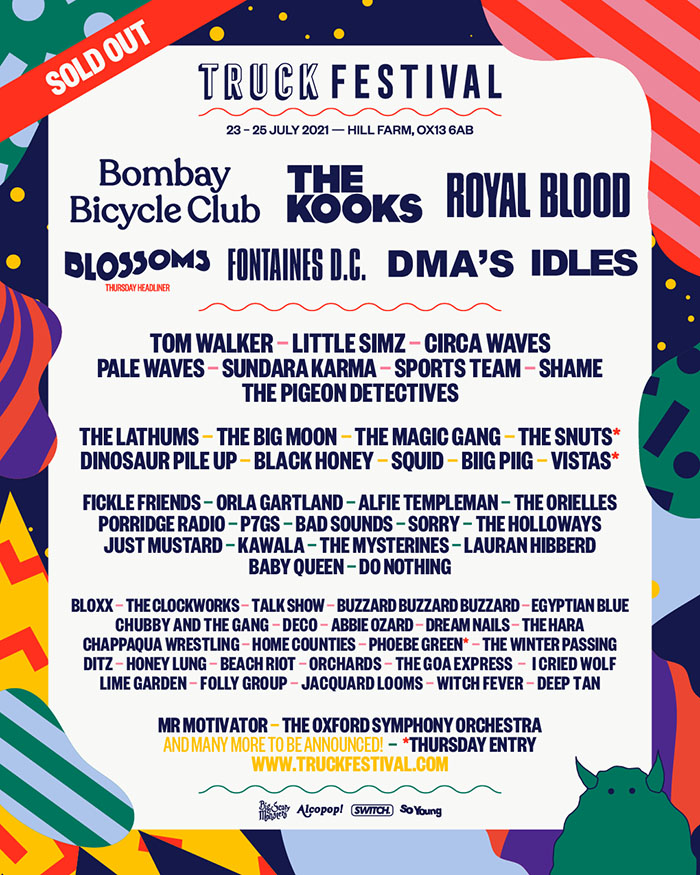 Festival organiser Matt Harrap commented: “It’s so good to be back and we’re over the moon to finally announce our first wave of artists! After the 12 months we’ve all had, to have the likes of Bombay Bicycle Club, The Kooks, and Royal Blood to close off the Sunday night, Truck Festival 2021 is already proving to be one for the history books. We’re also thrilled to welcome back IDLES to the main stage sunset slot, Little Simz closing the Market Stage and, of course, personal favourites Chubby and the Gang. It’s humbling to see all tickets have already sold out and it’s going to be a weekend to remember – see you at the bar?”

Truck’s newest tradition of opening its doors on the Thursday will continue this year, with some brilliant artists on the bill. Back by popular demand and headlining the Market Stage are Blossoms, who released their Number 1 hit album, Foolish Loving Spaces, just last year. Joining them are two of Scotland’s brightest up-and-coming rock bands – West Lothian’s The Snuts and Edinburgh’s Vistas.

It wouldn’t be Truck Festival without support for local acts – Truck’s Band App, where artists can directly apply to play the festival, will open very soon.

After receiving amazing support from Truck fans, the festival sold out long before any of the line-up was revealed. You can sign up to the waiting list for resale here: https://truckfestival.com/2021-sold-out-ticket-resale/

Truck festival will be working with the local authorities and following all the latest government guidance. If unable to go ahead due to Covid-19, all ticket holders will be able to rollover to Truck Festival 2022 or given the opportunity to claim a refund. More information here: https://truckfestival.com/update-on-covid-19/

First announced acts for Truck Festival 2021 are as follows: