Today the second wave of acts have been revealed, including two-time Mercury Prize nominees Everything Everything and 2021 BRIT Winner Arlo Parks, as well as Palm City x Switch, Rockin Chair and This Feeling line-ups – all joining this year’s headliners Bombay Bicycle Club, The Kooks and Royal Blood. Last remaining tickets will be available in a resale this Thursday 20th May.

Everything Everything return to the Truck Main Stage this July, after releasing their provocative and eclectic Top 5 record RE-ANIMATOR just last year. They have five Top 20 albums to their name, including 2010’s debut Man Alive, the first of their five Ivor Novello nominations. The art rock band from Manchester celebrated starting a new chapter with the release of their latest album and are continuing their new explosion of life with 2021’s single ‘SUPERNORMAL’, and a UK and Ireland tour on the horizon.

Singer, songwriter and poet Arlo Parks joins the bill, hot on the heels of her BRIT performance and award win for Best New Artist. Parks released her debut studio album, Collapsed in Sunbeams, earlier this year to critical acclaim, reaching No.3 in the UK charts. She creates expressive, ruminative indie-pop songs that have taken the industry by storm, with over 3 million monthly Spotify listeners and amassing over a hundred million streams across her catalogue – Parks’ first Truck performance is not one to miss.

Line-ups for Palm City x Switch Oxford, Rockin Chair and This Feeling have been revealed, as well as day/stage splits. Holy Goof, Hybrid Minds and Skream are heading up the Palm City x Switch Oxford, with familiar names such as Barrioke (featuring Shaun Williamson), Rhythm Of The 90s, Old Dirty Brasstards and more performing on the Rockin Chair stage. Plus, This Feeling welcomes The Clause, The Native, Lissy Taylor, The Chase, Coach Party, Lock-In and many more.

After receiving amazing support from Truck fans, the festival sold out long before any of the line-up was revealed. Last remaining tickets will go on resale this Thursday 20th May, available for those who signed up to the waiting list. 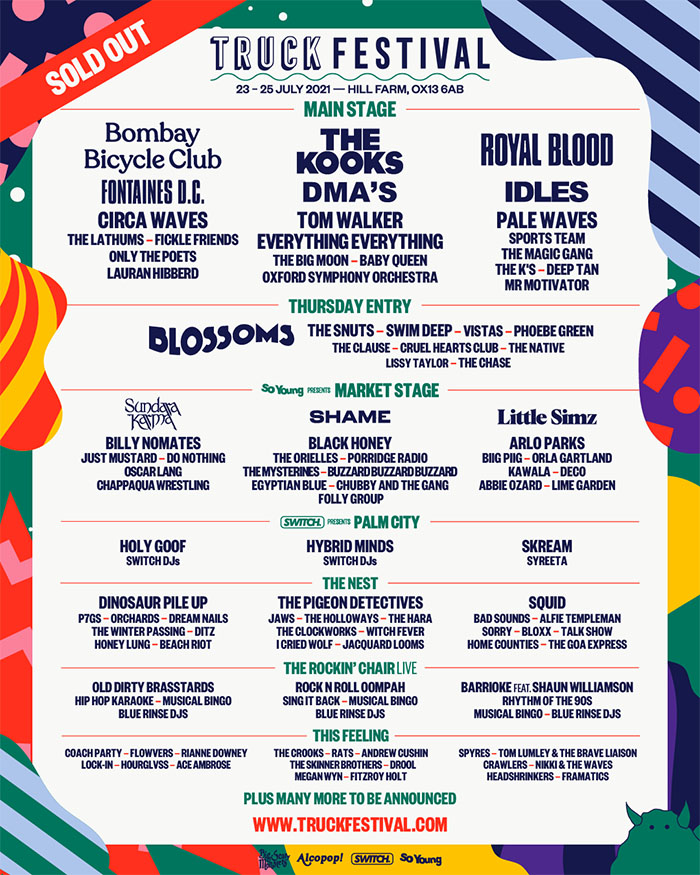 Truck festival will be working with the local authorities and following all the latest government guidance. If unable to go ahead due to Covid-19, all ticket holders will be able to rollover to Truck Festival 2022 or be given the opportunity to claim a refund.