After rumours abound earlier this week thanks to lineup ‘leeks’… Truck Festival has revealed the first details of its hotly anticipated return in 2022, bringing together some of the most celebrated and beloved faces in modern alternative music for a weekend of celebration, memories and more at festival fans’ favourite UK festival.

Returning in July 2022, Truck will once again be opening its doors for a generational rite of passage – full of landmark performances, the best in new and thriving alternative music and its distinctive brand of fun and mischief that’ll have the Truck faithful once again basking in an unforgettable festival experience. It couldn’t happen any other way.

Three years in the making, Truck returns and delivers in style with 5 not-to-be-missed headliners that leaves the competition in the dust – with Sam Fender, Kasabian, Bombay Bicycle Club, The Kooks and Blossoms all confirmed as part of a massive 2022 lineup. Arguably the most talked-about UK artist of the past 12 months, Sam Fender steps up for a momentous headline performance – pulling from his rapturously received second album ‘Seventeen Going Under’ that has commanded 5 star ratings and packed out venues over the past few months. With an arsenal of hits in his back pocket and an impassioned live show primed for the biggest of stages, expect his headline turn at Truck Festival to be a seminal moment for a star soundtracking a new generation like no other. 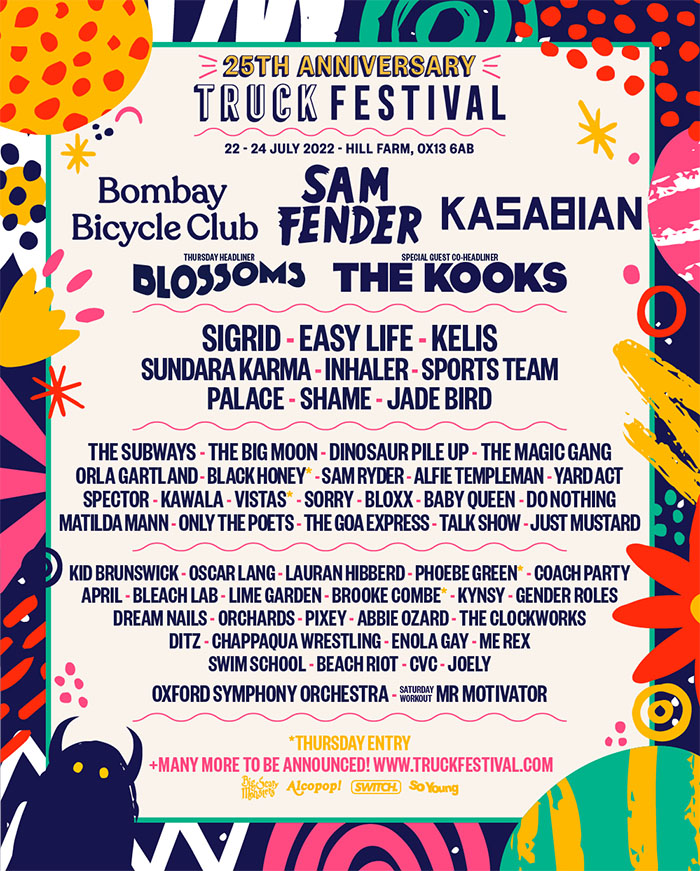 One of the UK’s most celebrated live bands of the past 15 years, Kasabian make their long-awaited Truck debut for a Sunday night takeover that’ll have Hill Farm shaking from start to finish. After headlining the biggest festivals on the planet across their storied career, expect anthems such as ‘Fire’, ‘Club Foot’, ‘Empire’, ‘Underdog’, ‘L.S.F.’ and ‘Shoot The Runner’ to go off as Serge & Co deliver big-time next July. Indie greats Bombay Bicycle Club head to Truck Festival in 2022 with a mesmeric and undeniable headline set that covers their five chart-topping albums, sure to have the whole festival up on their feet dancing. Be sure to ‘Shuffle’ your way to the front for this one, it’s going to be a euphoric party.

Across the weekend, Truck Festival boasts a frankly ridiculous lineup of every artist and every band you simply have to see right now – a capsule of everything shaking things up for a fresh new generation. Chart-topping sensation Sigrid heads to Hill Farm next July, bringing big-time pop bops that’ll have Truck’s finest ready to move as one, whilst some of the biggest breakthrough bands of the past 18 months stake their claim for the top across the festival weekend with vibe-masters Easy Life, soaring Irish titans Inhaler, crackerjack live buzzers Sports Team, and the thrilling Shame all taking their place on a formidable lineup made up of the who’s who of trailblazing new bands. All coming together in one destination over one weekend, it makes Truck truly vital each and every year for a generation of music fans.

With demand incredibly high from festival goers carrying over festival tickets from the past two years, a limited number of Truck 2022 tickets remain. Weekend Tickets are on sale now, starting from £140, with fans encouraged to snap up tickets ASAP to avoid disappointment.

Tickets are available now at:
https://truckfestival.com/