Still reeling from their surprise Christmas announcement, Slam Dunk Festival – the UK’s favourite alternative extravaganza – returns with another explosive round of monumental names for 2020.

Fresh from their blistering headline performance in a sold-out Brixton Academy, While She Sleeps have been revealed as the Jägermeister stage headliner for the May Bank Holiday weekend. Hailing from Sheffield, the British metalcore titans have four critically acclaimed studio albums to their name and are responsible for monstrous tracks such as ‘The Guilty Party’, ‘Four Walls’ and ‘Suicide Speaks’ with featured Bring Me The Horizon frontman Oli Sykes. Known for relentless touring and their persevering DIY attitude, While She Sleeps have unquestionable hardcore credentials and are sure to steal the show when they return at Leeds and Hatfield.

On their stage headliner appearance, Mat Welsh of While She Sleeps says:
“Slam Dunk is one of the best festivals and we always have a great time there, both playing and just experiencing the event. We’re very excited to be playing this year for 2020. Incredible line-up, incredible bands. We’re so stoked to be returning.”

2020 belongs to Code Orange; announcing their fourth album Underneath with an exhilarating title track, the Pennsylvania natives will make their debut appearance at Slam Dunk this summer. The Billboard-charting Grammy-nominated ground breakers have challenged the boundaries of heavy with every release and daring performance.

Also appearing at Slam Dunk for the first time are Arizona’s Doll Skin. Reclaiming the sound of 2004’s emo explosion, the Hopeless Records four-piece are poised to write their own era as they enter a new decade. Stand-out tracks ‘Mark My Words’ and ‘Love Is Dead And We Killed Her’ from their latest album are guitar-driven, impassioned anthems set to turn heads in the festival fields.

“We are stoked out of our mind to be playing Slam Dunk. To be included in this line-up is something special. This is a surreal opportunity for us and we’re very excited to make our way across the pond to take Slam Dunk by storm. See you there!”

Announced for Slam Dunk’s maiden voyage to Paris earlier this month, Parisian post-hardcore outfit Chunk! No, Captain Chunk! will be appearing at the festival’s UK instalment as a European Festival exclusive. Last appearing on Slam Dunk soil in 2016, C!NCC!’s hook-filled anthems interspersed with unforgiving hardcore delivered in their debut Something For Nothing up to their latest offering Get Lost, Find Yourself will result in singalongs in the Slam Dunk festival fields. 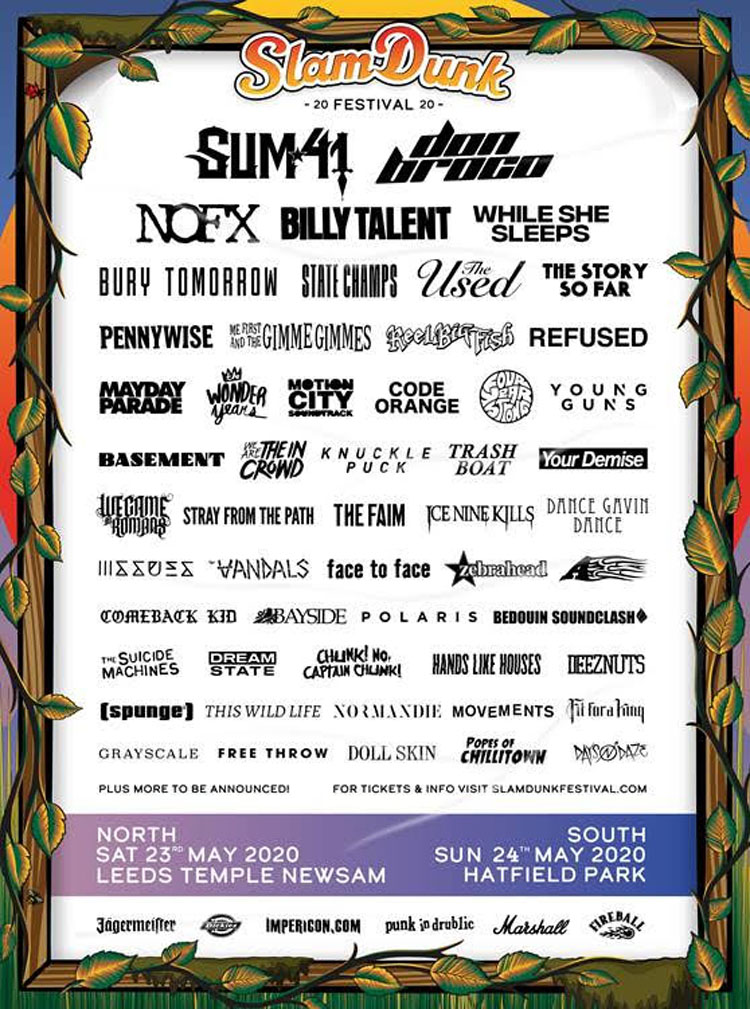 On playing three Slam Dunk shows this year, Chunk! No, Captain Chunk! say:
“We’re super excited to be back in the UK for these exclusive shows. We’ve had some of our best memories at Slam Dunk over the years and still remember the madness of our first show there 7 years ago. There’s simply a vibe and energy at SD that no other festivals can recreate. We cannot wait to get back out there and party with you all this spring!”

UK rockers “A” will join 2020’s impressive line-up, promising a vibrant performance of songs spanning their 23-year-career. Their post-grunge rock debut ‘How Ace Are Buildings’ and their 2002 follow-up ‘Hi-Fi Serious’ became cult-like successes with singles such as ‘Nothing’ and ’Starbucks’ marked as definitive rock tracks.

Jason Perry of A speaks on performing at Slam Dunk:

Bouncy Brit ska punks [Spunge] are returning to Slam Dunk Festival after their last appearance in 2016. Responsible for early noughties albums ‘The Story So Far’ and ‘Room For Abuse’ as well as the infallible single ‘Kicking Pigeons’, the ska stalwarts will get crowds moving this May Bank Holiday. London-based Popes Of Chillitown will also be bringing their essential two-tone-punk-ska-dub fusion to Leeds and Hatfield for the very first time.

“We’ve been itching to play Slam Dunk for years. So excited to be sharing a bill with so many legends! Bring it on!”

Slam Dunk Festival 2020 has completed its first stage line-up. Feel-good punks Me First & The Gimme Gimmes and skater-ska-masters The Suicide Machines complete the Punk In Drublic stage which returns for its second year at Slam Dunk after NOFX and co.’s made for a more than memorable true punk takeover. The join Face To Face, The Vandals, Reel Big Fish, Pennywise and NOFX.

Tickets to the Slam Dunk Festival Opening Party are £12 + booking fee. The event will take place at Leeds O2 Academy on Friday 22nd May from 10pm until 2am.

For more information or to purchase both opening party and festival tickets, please visit www.slamdunkfestival.com.