Y Not Festival have revealed their final wave of acts for 2022! The fifteenth edition of the North’s essential music festival returns this summer after two years away on 29th – 31st July, to bring music lovers the celebration they all deserve. Joining previously announced headliners Courtneeners, Blossoms and Stereophonics are Thursday headliners indie icons The Kooks, Jake Bugg, Amy Macdonald, The Hunna, KELIS, Lucy Spraggan and many more. Y Not Festival tickets are on sale via www.ynotfestival.com

Starting the weekend early as Thursday night headliners are one of the UK’s most nostalgic indie bands, The Kooks. Spanning a career of nearly 20 years and 5 albums in, the BRIT nominees are bringing all their hits to Y Not for the first time ever – the biggest Thursday headliners in the festival’s history!

Marking 16 years since their debut record, Inside In/Inside Out, which sold two-million copies and features indie club anthem ‘Naive’, ‘She Moves In Her Own Way’ and ‘Ooh La’, The Kooks have truly stood the test of time. After releasing five albums across two decades, including a Number 1 with sophomore record Konk, they’ve become a household name in their own right.

The Kooks frontman Luke Pritchard says, ​​“We’re really excited to be headlining Y Not Festival this year on the Thursday night. This is our first time playing Y Not, so we can’t wait to see you all and celebrate its return after two years away. We’re gonna start the weekend early with the biggest party ever!”

Joining the party in July is special guest Jake Bugg. After propelling himself into the limelight back in 2012 with his no.1 self titled debut album, featuring standout single ‘Lightning Bolt’, he has since released four more records including his latest offering, 2021’s No.3 album Saturday Night, Sunday Morning. Bugg’s songs pair weathered romanticism and a working-class swagger in a way that not many artists can achieve, making him a firm favourite with indie fans everywhere. 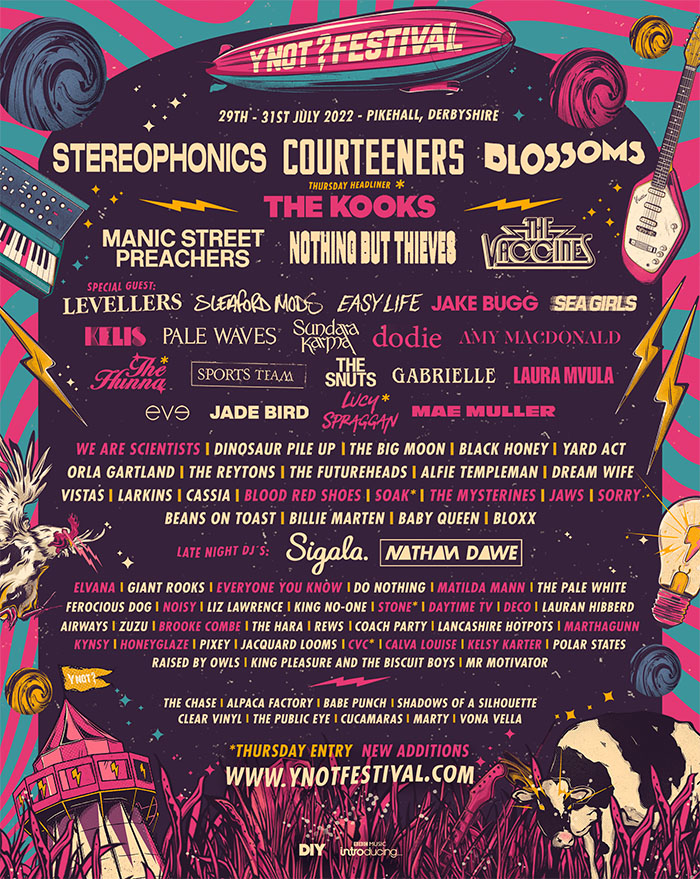 Scottish star Amy Macdonald will perform this July, playing huge hits ‘Mr Rock & Roll’ and ‘This Is The Life’, which charted at Number 1 in six countries including the UK. She comes to Y Not fresh off her European tour for recent studio album, The Human Demands.

Supporting The Kooks on Thursday’s mainstage are returning favourites, rock band The Hunna. The Quarry spilled over with fans when they headlined the second stage back in 2019, so expect that same energy for their set this summer.

Headlining the Quarry stage this year is multi-platinum, Grammy nominated, singer-songwriter Kelis. Best known for major tracks ‘Milkshake’, ‘Trick Me’ and ‘Bossy’, American artist Kelis is a real hitmaker, and now she’s travelling across the pond to perform at Y Not for the first time.

Also on the bill are class of 2012 and Y Not veterans We Are Scientists, returning to headline the Giant Squid, plus Derbyshire’s very own Lucy Spraggan, honest singer-songwriter Dodie, alternative rock duo Blood Red Shoes, Mercury Prize nominee SOAK, Brummie rockers Jaws and many more.