Following the release of their new track ‘Method To The Madness’ last week, The Wombats today announce their biggest UK headline show to date at London’s O2 Arena on 15th April 2022.

The special one-off ‘All The Hits’ event is a celebration of the band’s collection of bonafide indie classics. From ‘Moving To New York’ to ‘Method To The Madness’, passing by ‘Greek Tragedy’ and ‘Let’s Dance To Joy Division’, it will see The Wombats perform for the first time a career spanning greatest hits set including all the essential singles you’d expect from their acclaimed live show. Fans can also expect to hear future classics in waiting. This landmark show is the Liverpool-formed trio’s first in the capital since they played Wembley Arena in 2019 and reflects their ever increasing audience as they continue to connect with legions of new fans. Presale tickets will be available at 9am on Wednesday 9th June, with general sale at 9am on Friday 11th June.

‘Method To The Madness’ is The Wombats’ first offering since their highest charting album to date, 2018’s UK Top 3 Beautiful People Will Ruin Your Life and comes accompanied by a stunning Aaron Brown-directed video (Arctic Monkeys, King Krule), shot in Mexico. Starting slow and introspective before building to a cathartic crescendo of a finish, it sees Murph vow to dump his demons and “Fuck my sadness.”

“‘Method To The Madness’ is about trying to find patterns within chaos and ultimately giving up, and letting go. Some of the lyrics are lifted from my own honeymoon experience – walking around European cities, being amongst tourists whilst simultaneously being one myself, and generally blagging it with last minute hotel bookings. Feeling excitement but still being fully aware that nothing much has changed,” Murph explains. 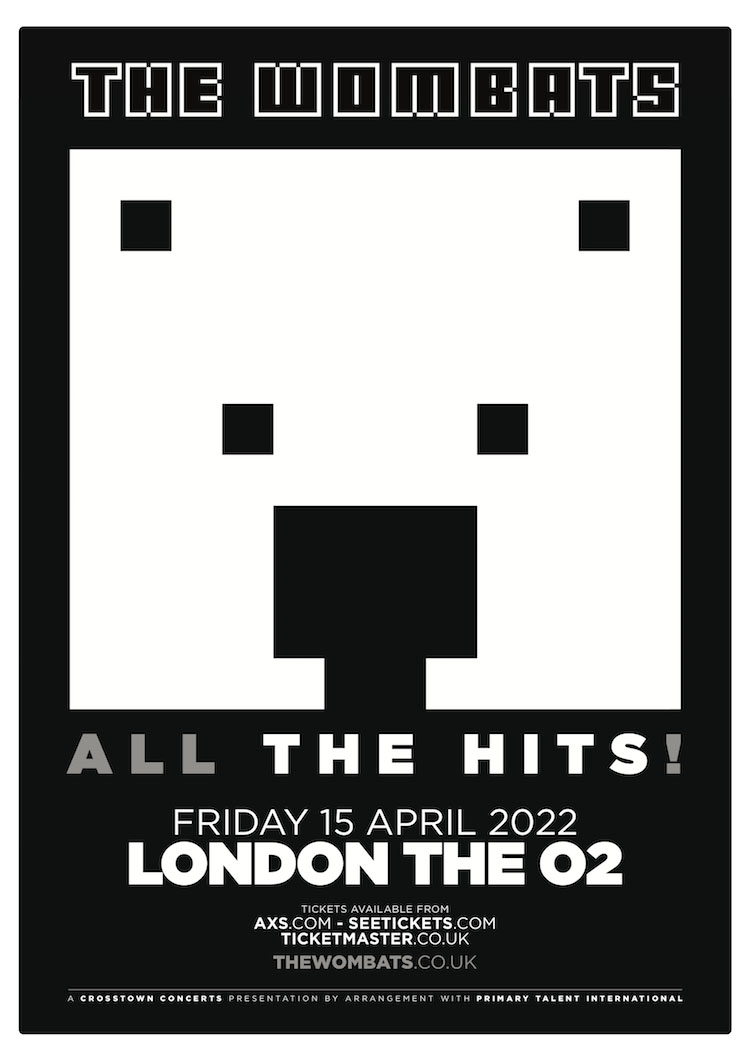 15 years and three top 5 UK albums into their career, The Wombats (made up of Murph, Dan Haggis and Tord Overland Knudsen) are pulling in a bigger audience than ever before. The viral success of Oliver Nelson’s remix of their 2015 hit ‘Greek Tragedy’ on TikTok has enraptured a whole new generation of fans, a feat they’ve managed to continually repeat since their 2007 debut A Guide To Love, Loss & Desperation. Used in over 600,000 videos (some of which have over 100 million views), the remix has rocketed to over 30 million streams, propelling the original to 120 million streams and sending it Gold in the US. It’s also helped them amass an extra 2.4 million monthly listeners on Spotify since just January; further illustration, if any were needed, of The Wombats’ ability to remain relevant to new generations of fans through the timeless power of their songwriting alone.

Recording remotely over the past year from their respective homes, the band have been working hard to produce some of the most captivating, inventive and forward-thinking music of their career. With a summer ahead that includes second from top billings at Reading & Leeds Festival main stage and Neighbourhood Weekender, plus their O2 Arena show set for 2022, this only the start of what’s to come as fans new and old gear up for the next exciting chapter in this constantly evolving success story from one of Britain’s most adored bands.