After 490 million career streams to date, a revitalised and resurgent Aquilo take another big step towards the October 15th release of their new album ‘A Safe Place To Be’ by sharing the new track ‘I Wanna See You Smile’. The duo unveil the track alongside news of a headline tour of the UK and Europe in February 2022 – their first in almost four years.

At its heart, ‘I Wanna See You Smile’ is an intimate piano in which Tom Higham’s seemingly effortlessly classy vocals express a bittersweet acceptance of a lost love who is moving on with her life. He’s surrounded by the beauty of the production around him, with Ben Fletcher’s sweet, sorrowful piano and swirling, celestial vocal harmonies building towards a richer textured conclusion. The song ultimately fades away to give the cathartic feel of finally being free of the emotions that it discusses. Listen HERE.

As the upcoming album’s closing track, ‘I Wanna See You Smile’ has a final soothing, back-to-normality ambience that provides the perfect footnote to end an album full of personal stories of universal resonance. The recent singles ‘Our Bones Turn To Stone’ and ‘Out In LA’ have hinted at the sonic scope, melancholy emotions and intricate details that makes the new album such a warm and inviting experience. Now ‘I Wanna See You Smile’ adds to that anticipation.

Aquilo commented, “‘I Wanna See You Smile’ feels like a song we could have written a long time ago. It’s a song about acceptance and wanting the best for someone that moved on before you did. We feel nervous to let people hear it because it’s vulnerable. But this wouldn’t be the first time we’ve released a vulnerable song. So hey ho.”

As with the rest of the ‘A Safe Place To Be’ campaign, the artwork for ‘I Wanna See You Smile’ is a creative visual realisation based upon their hometown of Silverdale in Lancashire. The pair collaborated with their friend, the creative director Charlie Drinkwater, to build a highly detailed model village that embodies many of the stories and memories that they have of the place. 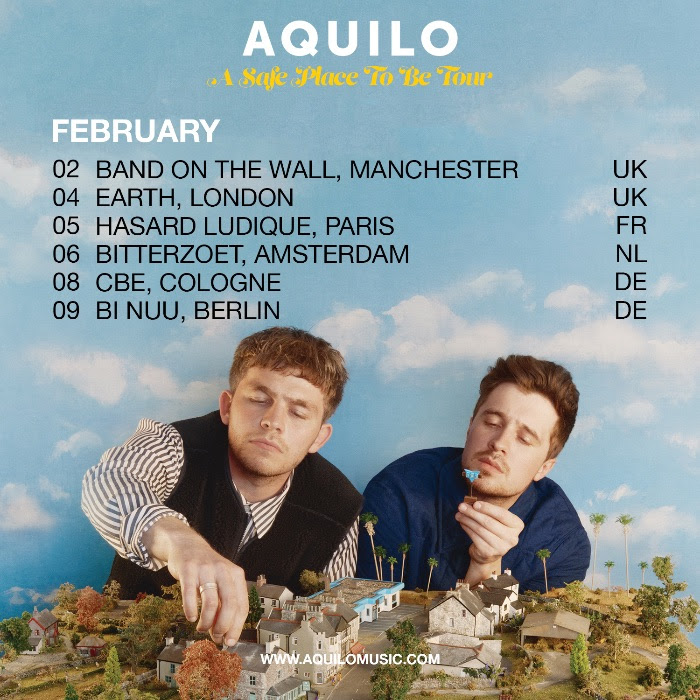 Prior to writing ‘Our Bones Turn To Stone’, the pair had decided to put Aquilo indefinitely on ice. They hooked up with producer Jack Sibley (Pedestrian, North Downs, Maribou State) and let their creativity flow, just as they had done back when they first started. It was an epiphany, and the start of what they thought was a brand new project together. Yet in time, they came to realise that the combination of Tom’s vocals and Ben’s instrumentation couldn’t be anyone else. Aquilo had instead been reborn, broader in scope, stately in scale, and simply a level above anything they had created before.

Now streaming, ‘I Wanna See You Smile’ is also available as an instant download to fans who pre-order the new album here. All pre-orders will also receive downloads of ‘Our Bones Turn To Stone’ and ‘Out In LA’.

Having previously performed at Glastonbury, Latitude and SXSW, supported Oh Wonder and headlined London’s Scala, Aquilo are set to make a long awaited return to touring early in 2022. Tickets for all of their UK and European headline shows, listed below, go on general sale here from 10am tomorrow, Friday September 10th.

The duo added, “After having two tours cancelled due to the pandemic we just can’t wait to be back on the road again. We’ve released quite a few songs since we last toured and it usually feels like they take on a life of their own when they enter the live show. Seeing people’s faces that have been tuning into our music over the past two years we’re pretty sure will make the long wait all that bit more worth it.”