Blossoms have today announced a huge hometown show for June 22, 2019. The band will be playing their biggest headline gig to date at Stockport County’s Edgeley Park Stadium. Also on the bill for the show are The Coral, Cabbage, The Blinders and Fuzzy Sun.

Tickets for the gig are available from Gigs And Tours at 9am on Friday October 19.

Speaking about the show the band said:

‘Having already played Wembley, the Etihad Stadium & Old Trafford, we’re now particularly pleased to be headlining at the football ground closest to our hearts … and our houses … Stockport County Edgeley Park.’

Blossoms recently sold out their entire December 2018 UK tour in one day, selling over 25,000 tickets in the process. The tour will see them play in Glasgow, Sheffield, Nottingham, Birmingham, Bristol and Southampton, as well as two gigs at Manchester’s Victoria Warehouse and a London date at Brixton Academy.

Following its release in April, Blossoms second album Cool Like You has amassed over 18,000,000 streams worldwide. The album charted at number 4 in the UK album chart and spawned the anthemic singles I Can’t Stand It, There’s A Reason Why (I Never Returned Your Calls) and How Long Will This Last? 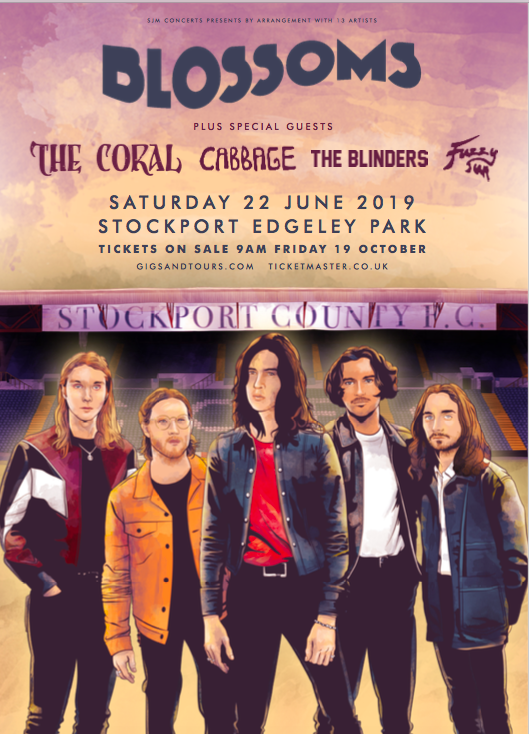