One of the most exciting dates in the UK music calendar, Music 4 Mental Health has announced it’s final acts and released a limited batch of final tickets, due to phenomenal demand.

British rapper Professor Green will be performing tracks from his three studio albums, ‘Alive Till I’m Dead’, ‘At Your Inconvenience’ and ‘Growing Up In Public’. Professor Green is famed for his incendiary live performances as well as his acclaimed documentaries notably ‘Working Class White Men’ which aired on Channel 4 as well as BBC shorts on homelessness, poverty and suicide; throughout his career, he has been particularly outspoken about mental health.

Louis Berry sprung to prominence with a host of highly-praised singles and EP’s showcasing his tremendous voice and emotionally charged lyrics. Combining rock and roll with elements of soul, there is a unique vibrant energy to his live shows and Berry is one of the most highly-regarded new artists to emerge in the UK in recent years. 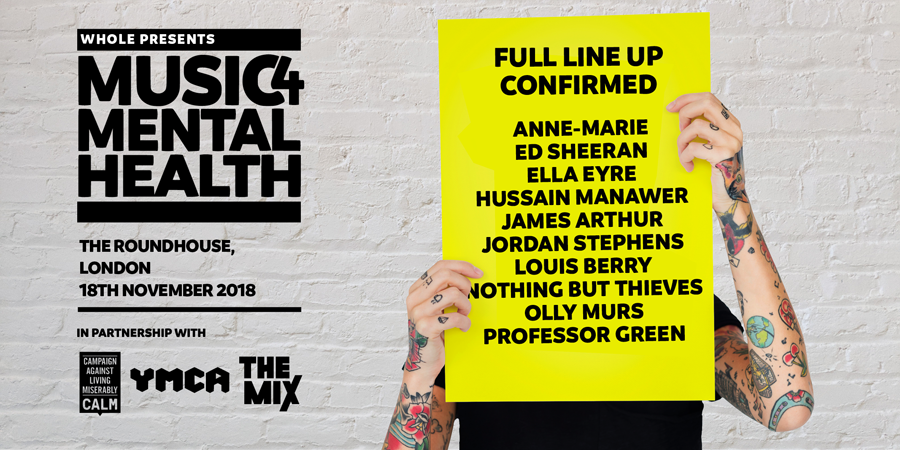 TICKET INFORMATION
A very limited allocation of general tickets and VIP tickets to Music 4 Mental Health will be available fromwww.whole.org.uk/music-4-mental-health/, with more information accessible from the official site also.

Music 4 Mental Health is running a strict anti tout policy for this event – appointing Twickets as the official resale partner for this event. Twickets is a fan-to-fan ticket resale marketplace where the price of tickets is never more than the original face value. Tickets can only be resold via this platform.

Buying or selling tickets on any other platform is strictly prohibited. Transfer of names on tickets is not allowed unless re-sold via Twickets, to ensure full transparency and fair access to tickets.