Norwegian songstress AURORA has returned with her brand new single, Cure For Me via Decca Records. Following its World First premiere on Apple Music 1, alongside an interview with Zane Lowe, AURORA is also featured as the global cover of New Music Daily. Written in Australia by the pop chanteuse, the song is about breaking free from shame and shutting out the doubters. The empowering and upbeat track opens with AURORA’s signature soft yet soaring vocals, and builds to a darkly-hued carnivalesque chorus. Listen here. Directed by AURORA herself and Fill In Productions, the official music video can be seen here.

Of Cure For Me, AURORA has explained, “Sometimes I feel like the whole world Is trying to convince you something is wrong with you. And sadly often people believe this to be true. It is very scary how easy it is for someone to convince you that you are wrong. Or that you are overly emotional, too strange, and not good enough. And I think it’s about time we shut those voices out. Because in no way should anyone convince you that you are not worthy because of the way you look, or act, believe in or love. We should be allowed to be human. And we don’t need a cure for it.”

Showing no signs of slowing down, AURORA has also just announced the highly-anticipated news that she’s heading out on tour next year! The singer-songwriter will kick off the headline dates at Milan’s Alcatraz on 13th February 2022, and make stops in cities such as Paris, Berlin, and lots more. AURORA will then hit the UK for shows in Birmingham, Newcastle, Glasgow, Dublin, Manchester, Leeds and Bristol before wrapping things up at London’s O2 Academy Brixton on 6th April. She has also partnered with Spotify to identify and reward her most passionate fans with an exclusive offer of advance access to tickets, which will go on sale on 14th July at 9am. O2 pre-sale will also go on sale on 14th July at 9am, and general tickets go on sale on 16th July at 9am. Fans can sign up to pre-sale access here. 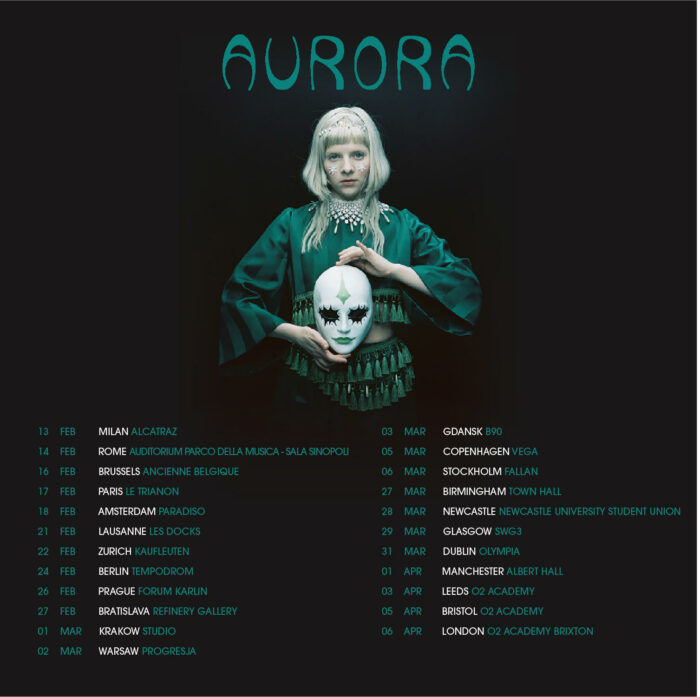