This November, Dr. Martens will be hosting a one off week of events, with 8 cities playing host to 8 of the UK’s most exciting up and coming artists over 8 days.r=”ltr”>These remarkable events, taking place in Dr. Martens stores and open to just 60 lucky attendees per show, will offer fans the chance to see future stars in truly intimate settings.

Leading the charge with the first show in Cambridge is Scottish trailblazer Lewis Capaldi. One of 2018’s homegrown rising stars, the folk sensation was the name on everybody’s lips from the off, storming out the gate with stunning debut single ‘Bruises’. Since then the 21-year-old singer songwriter released new singles “Lost On You”, “Fade” and “Grace”. Bringing his powerful songs about love and loss to the Cambridge Dr. Martens store, it’s sure to be an unforgettable performance from a wordsmith on the rise.

Dubbed as “the UK’s answer to Post Malone,” by Wonderland Magazine, HEX is without question one of the most exciting artists of the moment. The Nottingham-born rapper is known for his impressive ability to mix genres like Afrobeat, R&B and Rap to come up with something entirely unique and impactful. His latest hit “Stunna” can be heard in nightclubs across the country, and now Hex will be bringing his incredible live show to the Dr. Martens store in his hometown of Nottingham.

Also joining the lineup are indie stars Swim Deep. As a key part of the talked-about Birmingham scene that emerged this decade, fans have been hungry to hear about what comes next from the beloved indie-swooners, with new music in the works which follows their critically acclaimed debut album Where The Heaven Are We and sophomore release Mothers, which NME described as “easily the best, most mind-bogglingly weird thing they’ve done”, and fans will no doubt be treated to a wealth of the future as hometown heroes return on November 4th.

Fresh off selling out Brixton Academy last week, Tom Grennan will be taking over Brighton’s Dr. Martens Store on the second day of events. He first started making waves when his incredible vocals featured on the Chase and Status track “All Goes Wrong”, but it was his anthemic single “Found What I’ve Been Looking for” that catapulted him to success. Since then he has appeared on the legendary Later… with Jools Holland, BBC Radio 1’s Live Lounge and Soundtracked Sky’s Premier League coverage. Expect this one to be packed with fans getting the chance to witness the voice of 2018 in the flesh.

Next up is one of the UK’s most exciting live acts, Bath band Bad Sounds, who are set to take the Bristol store by storm. The eclectic-sounding 5 piece band fronted by brothers Ewan and Callum Merrett aren’t pinned down by genres, which is invariably the sign of something exciting. Their latest track Wages debuted as Annie Mac’s ‘Hottest Record In The World’  and is currently on the Radio 1 playlist due to their signature satisfying harmonies and infectious rhythms. The euphoric Wages appears on their incredible 2018 debut album Get Better; a remarkable release that has made waves within the music industry demonstrating their trailblazing soulful spirit that has already earned them a fierce fanbase through their festival appearances this summer, and currently on their UK headline tour. The band’s intimate in-store performance will not be one to miss.

Also joining the bill is 80’s post-punk inspired band The Ninth Wave. Since their emergence in 2016, the Scottish four piece won the coveted ‘Best Newcomer’ title at the Scottish Alternative Music Awards, gained enthusiastic praise from BBC Radio Scotland as well as wowing audiences at TRNSMT and Electric Fields. Their sound has since spread to the rest of the UK, with a series of much talked about headline shows and huge support slots for The Magic Gang and others – in the wake of two remarkable EPs. Dr. Martens will host the band in their hometown of Glasgow as a creative new force in music is welcomed into the fray.

Playing in Newcastle is indie’s most charismatic up and coming band King Nun. The  4 piece band recently made a comeback after some time off, and are set to release their long awaited debut EP in November via Dirty Hit. Fresh from supporting labelmates Pale Waves in massive venues around the country and ahead of their forthcoming UK headline tour, the quartet will bring their raucous brand of punk to the Newcastle store. This one is going to be wild.

Finally, acclaimed Nottingham duo Young T & Bugsey will be closing the shows with a set in Leeds City Centre. First making their mark when they released their very own take on Drake’s “0 to 100” which garnered 10,000 views virtually overnight, they’ve since experienced the Radio 1 playlist with their immediate hooks. Now finding themselves rubbing shoulders with grime mega-star Stormzy and labelmate J Hus, Young T & Bugsey are set for a huge 2019 as UK rap’s next breakthrough kings.

Encompassing 8 Shows in 8 Cities in 8 Days, Dr. Martens Presents is the go-to hub of the most exciting voices and sounds in modern British music – celebrating those who do things differently and stamp their own mark on culture in the process.

Access to all shows are free, with tickets available through a special registered ballot for each night, available to sign-up for below: 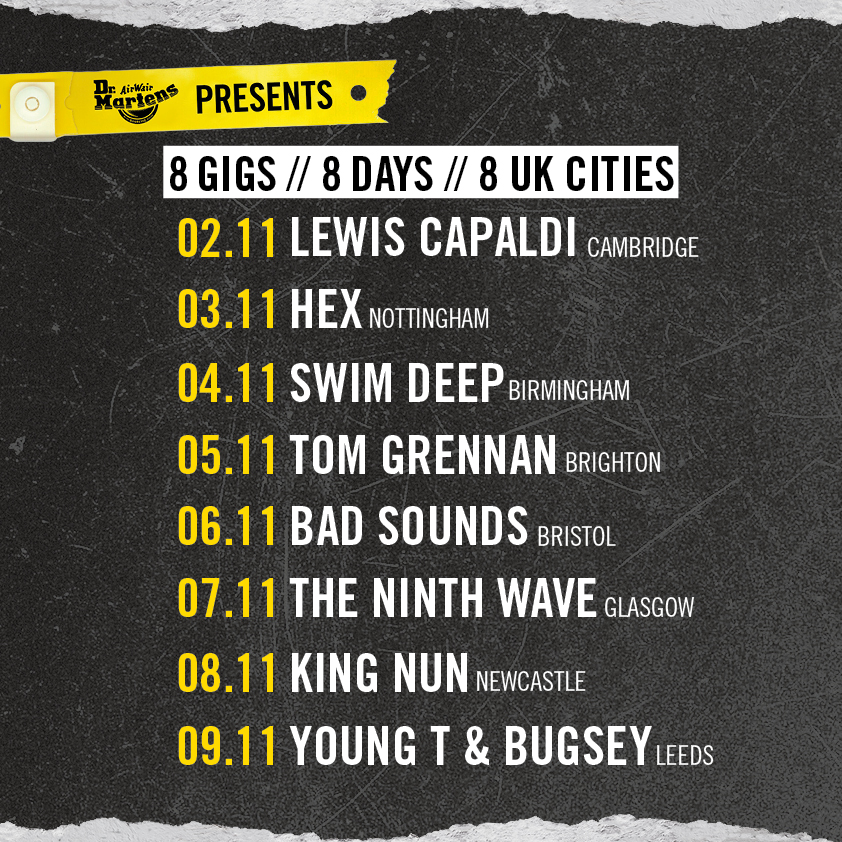