Talking about this gig beforehand, it came up in conversation that you really had to be a superstar to be pulling in the crowds to perform at places like Roundhay Park in Leeds and, well, when you clock up the numbers for these two shows and come up with a figure close to 150,000 fans over two nights, that certainly puts Ed Sheerhan in that bracket. So, despite the obligatory crap weather and logistical problems doing its best to turn the first night into a washout for some fans, the sun shone down on the 80,000 fans that made their way into Roundhay Park for the second night as Ed Sheeran brought Leeds to a complete standstill.

So, with tens of thousands of fans already packed into Roundhay Park, it was upto Brit pop sensation Lewis Capaldi to kick things off. Known for his wicked sense of humour and that hit song, the Scot only had a short half an hour to entertain fans. Clearly enjoying his love affair with the British public, by the time his set was finishing with hit single “Someone You Loved”, the “fat bloke who writes sad songs” had an entire field singing along with him and it seems that love affair shows no sign of ending just yet.

With barely enough time to get in the queue for the bar/toilets let alone anywhere near the front, it was time for Lowestoft’s finest rock n’ roll exports The Darkness to kick things up a notch with their high energy rock and, while they may not have been to everyone’s taste, it’s hard to deny that Justin Hawkins is the kind of frontman every rock band would give their right arm to have. Full of swagger, Hawkins and his bandmates rock as best they can through their forty-five minute set to a crowd who, let’s face it, by now were getting itchy for the headline act. Ending the set with their hit single “I Believe In A Thing Called Love” you get the feeling that only then did they ring familiar with a good portion of this crowd.

For the second night running, there was barely a space to move in Roundhay Park as Suffolk superstar Ed Sheeran took to the stage opening with Grace. Given the sheer magnitude of these shows and the fact that Sheeran has now seen his name join a list of acts to have performed at Roundhay Park that includes Madonna and Michael Jackson, you’d expect just a slight hint of nerves from the songwriter but it didn’t show. However, as you watch Sheeran hold this 80,000 crowd in the palm of his hand for nearly two hours do you realise that shows like this are now second nature for Sheeran.

Revealing how he spent his early years in Yorkshire, the songwriter eases his way through a setlist that has this crowd singing along from the moment he takes to the stage. Through the likes of Castle On The Hill, Galway Girl, Thinking Out Loud and Shape Of You, the hits just kept pouring out from the stage. Playing to a crowd this size on a stage this big would demand a suitably massive stage show and, despite this in essence being just a man and his guitar, everything about the show screamed massive. Thousands of mobile phones lit up the early evening darkness midway through the set and so, with Sheeran promising to come back soon as he left the stage, the second of two magical nights in Yorkshire came to an unforgettable conclusion. 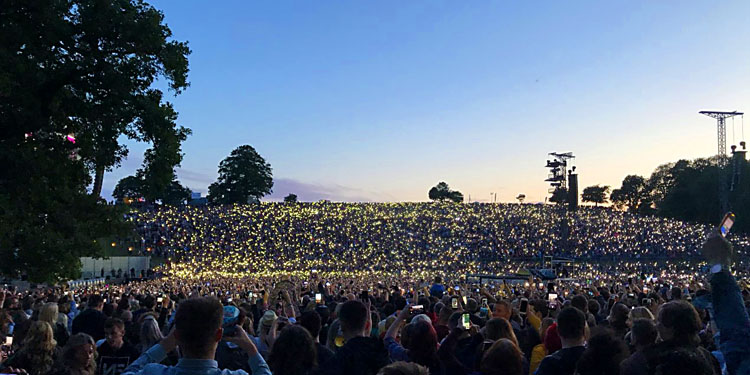