The biggest rock band in the world, Foo Fighters are teaming up with Europe’s largest rock school to announce the Rocksteady: Just PLAY Foo Fighters free live music education experience. Children across the UK will have the opportunity to learn to play an iconic Foo Fighters riff or beat or two in just 30 minutes—regardless of whether or not they’ve ever played an instrument!

And the best thing? It’s free for all!

Last year, Dave Grohl released “PLAY”, a two part mini-documentary which celebrated the rewards and challenges of dedicating one’s life to playing and mastering a musical instrument. Directed by Grohl himself, it involved the Foo frontman challenging himself to play non-stop for 23 minutes on several different instruments. The challenges Grohl created for himself in creating “PLAY” mirror those taken on by music students every day—and this shared quest gave “PLAY” its mission to inspire and promote music education.

In a similar vein, the free Rocksteady: Just PLAY workshops will offer young people across the UK the chance to experience the magic, inspiration and challenges that come with learning to play a musical instrument. The events will be open to all, taking place on Saturday 16 February in Birmingham, Bristol, Leeds, Manchester, Northampton, Nottingham, Portsmouth, Guildford, Kingston and Romford. Children aged from 5 to 16 can turn up throughout the day and start learning to “PLAY” their favourite Foo Fighters song.

Rocksteady Music School are experts at getting any child started on playing in their own bands, often as quickly as 10 minutes, and will provide all the instruments and teachers. The event is open to all abilities so whether you already play or have never touched an instrument before, you will have the chance to learn and perform the music of one of the greatest rock bands in history. As well as getting to be part of a real life rock band, children that take part in the event will also be entered into a prize draw on the day to win exclusive merchandise including t-shirts, vinyl albums and signed drumsticks.

Rocksteady CEO Scott Monks said: ‘If you can help a young person feel like a rockstar for a day you can inspire them into a lifelong love of making music and you can’t get much more inspirational than the Foos!’ “One of the exciting things about this event is that it is for everyone, regardless of ability. If you’ve ever dreamed of playing in a band or trying a new instrument, make sure you come along and get involved – it’s going to be an unforgettable day for everyone.”

We see firsthand every day the massive benefits music can have to children’s confidence, wellbeing and sense of identity. Some of the children who need music in their lives the most would not necessarily consider themselves musical and so it is imperative that they are given the opportunity as early as possible to pick up an instrument and just play.’
www.rocksteadymusicschool.com 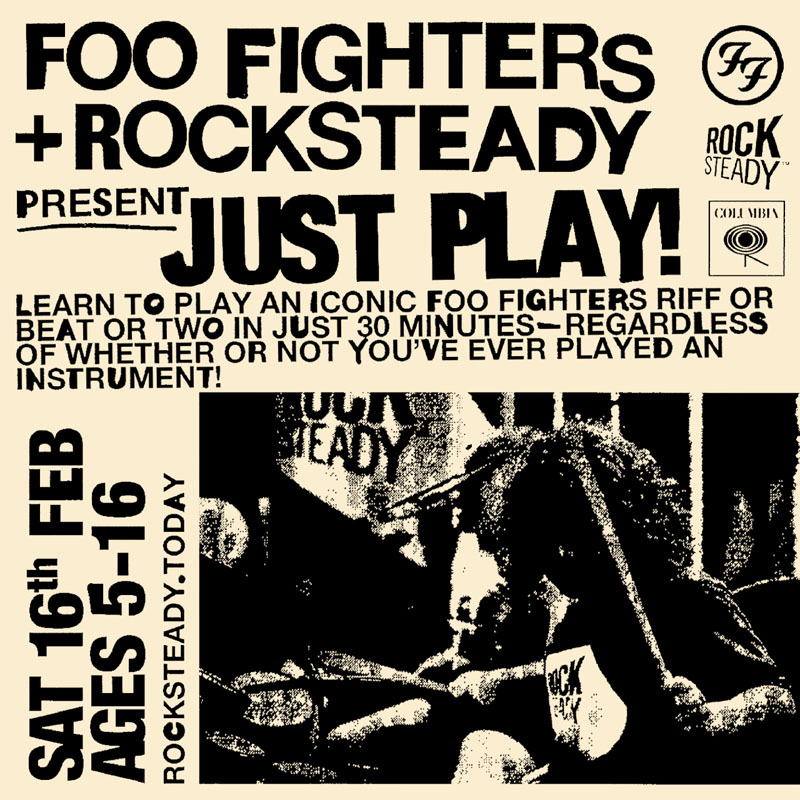