London-born rising star GIRLI has just announced the incredibly exciting news that she is heading out on a UK/IRE tour in November and December! The songstress will kick the headline dates off in Bristol at The Lanes on 7th November, and hit towns and cities such as Cardiff, Brighton, London, Manchester and more, before wrapping things up at the Arts Club Loft in Liverpool on 3rd December. GIRLI has said of the live date news, I am BEYOND excited to go on tour again. This will be first tour in 2 years, and my first time performing the Ex Talk and Damsel in Distress songs. Plus it’s the first time I feel I have total creative control over my show. It’s gonna be raucous, high energy, wild and I’m so ready to see all my fans on the road!! Full details and tickets can be found here, from Wednesday at 9am.

The singer-songwriter will be playing a socially distanced show at the historic Bush Hall in London on 9th July, to celebrate 20 years of the venue. GIRLI will also be joining Architects, Machine Gun Kelly and lots more at London’s first alternative hip hop and rock festival, ALT + LDN at Clapham Common on 30th August. Milly Toomey (aka GIRLI) has been cutting her teeth on the live circuit over the last few years, and has played shows with the likes of Ashnikko and Declan McKenna, and festivals such as Latitude, All Points East and Truck.

GIRLI recently released her single, More Than A Friend. The heart-wrenchingly honest track showcases GIRLI’s signature richly-hued soaring vocals, and culminates in an anthemic chorus. More Than A Friend has received radio support from the likes of BBC Radio 1’s Future Artists show and on their Introducing show. It was also added to an array of playlists including Spotify’s New Music Friday UK (786k likes) and misfits 2.0, plus several across both Apple Music and Amazon Music. The official music video co-directed by GIRLI herself which has been viewed more than 200k times on YouTube, can be seen here. 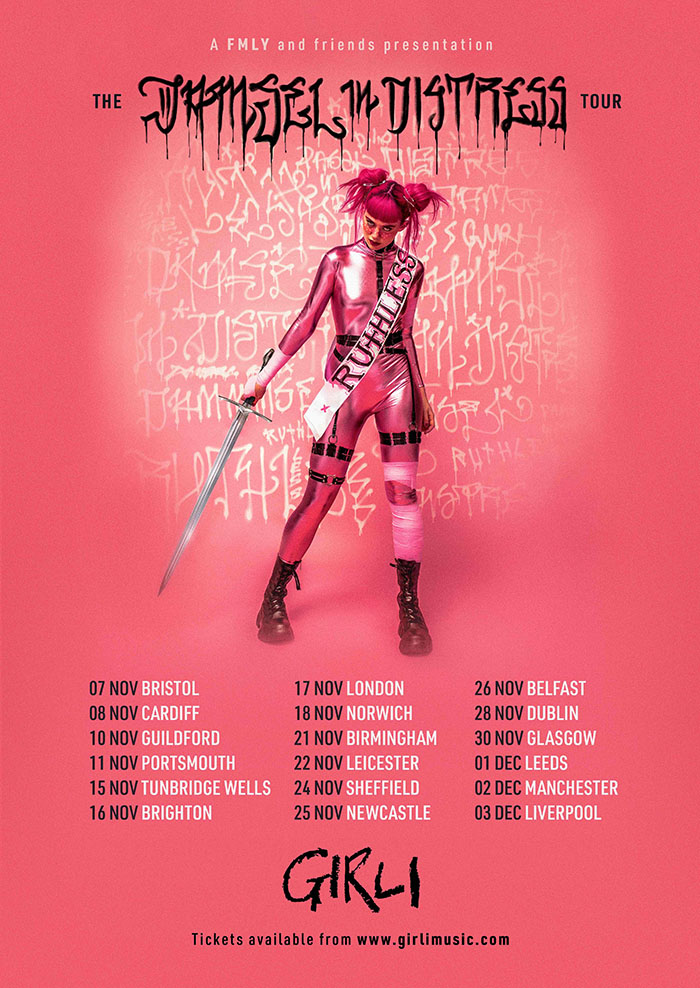 Earlier this year saw GIRLI release her Ex Talk EP, which has racked up a whopping 1.3+ million combined audio streams, and 300k+ combined video streams. This 5-track body of work is the follow up to GIRLI’s highly regarded debut, Odd One Out. The 9-track album which was released in 2019, garnered support from tastemakers such as the Guardian, Clash, DIY and more.

GIRLI’s passions go further than music; she speaks avidly and openly about topics such as feminism, sexuality and mental health. Last November saw the alt-pop artist launch her own podcast, ‘GIRLI IRL’, where LGBTQ+ artists join her to discuss all of the above and much more. Listen to all episodes here. GIRLI also recently started sharing #HERstory teaching videos on TikTok, where she recently surpassed 1 million likes. Treating her avid fans to a very special and unique experience, GIRLI gave them the opportunity to submit fanart and feature in her digital exhibition which ran online last month. The pop powerhouse also shared an exclusive live show which was filmed from an empty London venue, where she performed Ex Talk in full.

TICKETS ON SALE WEDNESDAY AT 9AM HERE

AND ALT+LDN FESTIVAL IN AUGUST

BUY TICKETS FOR BOTH HERE