Continuing to break records and capture the nation, Lewis Capaldi has today announced a huge UK headline arena tour, kicking off March 2020. The announcement comes ahead of the release of his eagerly-awaited debut album Divinely Uninspired To A Hellish Extent – out May 17th on Virgin EMI – featuring his UK Number 1 platinum-selling single ‘Someone You Loved’, the biggest UK single of the year so far, and one of the longest running #1 singles of the past 25 years. 2020 arena tour dates below:

Lewis has also announced a special & unique new fan initiative LIVELIVE. Born from personal and fan experiences, the initiative has been set up for those who experience anxiety or emotional difficulties and have concerns about attending the shows. All proceeds from a compulsory 50p extra charge at checkout for each ticket sale goes solely towards providing a dedicated email address and team at each venue who are expertly trained and qualified in assisting with panic, anxiety or any other concerns fans may have. On the ground assistance will range from meeting fans at the door, escorting them to their seats, to taking anyone that needs to a specially designated ‘escape space’ where time out can be spent. Fans can simply visit the signposted help points inside each venue which will be open before, during and after the concert.

As of today, fans are able to get in touch by emailing livelive@lewiscapaldi.co.uk to speak to a qualified support advisor, where you are able to discuss any concerns you have either getting to the shows or any worries you have about being in attendance. If requested 48 hours before the show, Lewis’ team can arrange for you to be met & taken into the venue to help make your visit more comfortable.

Speaking of the initiative, Lewis comments; “I always get tonnes of messages from people online who have said they want to come to my shows but can’t because they’re struggling massively with anxiety or are just generally afraid they will have a panic attack during the show. I really wanted to put something in place to help those people feel comfortable and offer them support to allow them to experience the shows. I just hate to feel that anyone’s anxiety is making them miss out on anything they want to do and LIVELIVE is my attempt at helping make these shows enjoyable for as many of those people who have been supporting this journey for me!”

Before setting light to arenas next year, Lewis will first embark on his November UK tour which sold out in under a minute, including a night at London’s O2 Academy Brixton, as well as festival dates and support shows across the summer with Ed Sheeran and The Killers.

Recorded over an 18 month period across London, New York & L.A., Divinely Uninspired To A Hellish Extent is an ironically titled, but charismatically defining album that’s lyrically candid and an accurate snapshot into the ups and downs of growing up. Consisting of recordings that capture the charm & feeling of how they were originally written, including hit UK singles ‘Grace’, Bruises’ &‘Someone You Loved’, Lewis’ stunningly identifiable voice, coupled with its turbulent themes of love, loss and heartache, make it a debut record that is unequivocally relatable.

Lewis has also achieved successive Radio 1 A-List tracks, sold over 150,000 headline show tickets, enlisted the music video acting services of ex-Dr Who star Peter Capaldi, amassed over 600 million plays across streaming services & has sold out no less than five back-to-back headline tours, with demand outstripping supply at every turn. This all underlined with critical praise, being shortlisted for the 2019 Brits Critics’ Choice award, TV performances on The Jonathan Ross Show & Top Of The Pops, and making both the BBC’s Sound Of 2018 longlist and BBC Radio 1’s Brit List.

His personal achievements haven’t gone unnoticed by his musician peers either, with Ed Sheeran, Sam Smith, The Killers, Rag’n’ Bone Man, Bastille & Niall Horan all offering Capaldi support shows to audiences on a gigantic scale. The young 22 year old who only 18 months previous had been plugging-in night-after-night into the local pub gig circuit of Glasgow, will now head out on the road in November to headline some of the country’s most notable venues.

Lewis has taken pairing sad songs with an incredible wit, and a rampant social media following to match, and made it his very own. The results are hilariously beautiful. 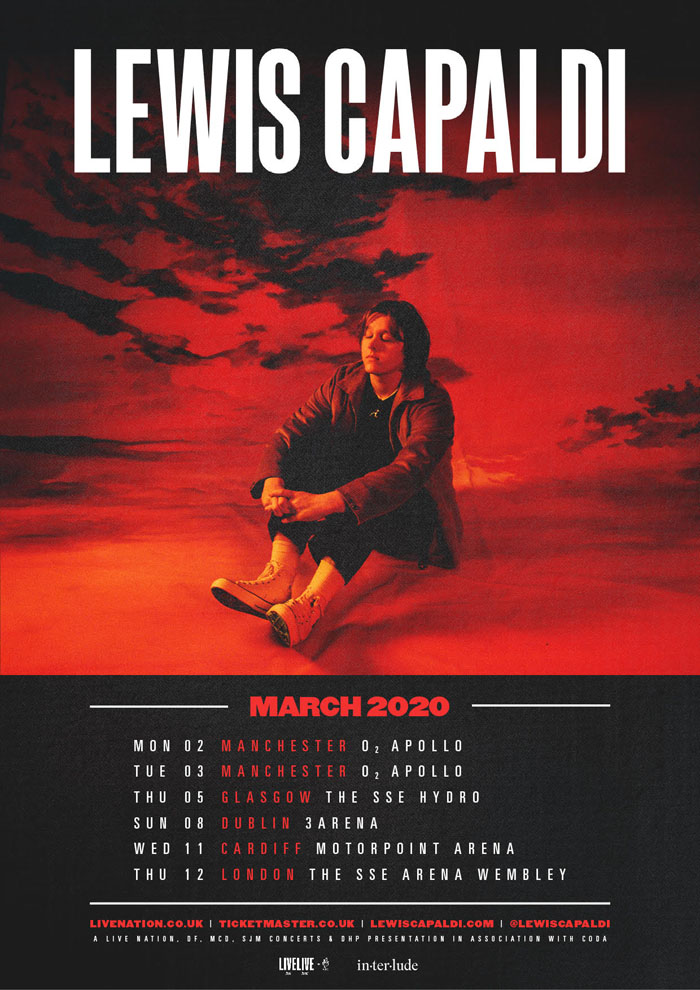