In the year that live music finally makes a comeback, Live at Leeds returns for a day full of the hottest breakthrough bands on the UK music scene, this time celebrating its 15th year as the North’s leading metropolitan new music festival.  Renowned as the first place to hear the essential sounds of the year ahead, the multi-venue, inner-city festival, Live At Leeds will this year be held on Saturday October 16th 2021.

With a line up that includes some of the most exciting names in modern music and the hottest breakthrough bands on the UK music scene, Live at Leeds is your chance to discover your new favourite artists. Today we can announce the first wave of acts, including headline performances from punk rock band favourites, Frank Carter and the Rattlesnakes, who have recently returned with their raucous new single ‘My Town’ featuring IDLES frontman Joe Talbot.  Famed for their high-energy dynamic live performances, Frank Carter and the Rattlesnakes promise an energetic headline show which is not to be missed.  Also heading up this year’s bill are Mercury Music Prize nominated,indie-rock 6 piece Sports Team.  Paving the way in the next wave of exciting British indie acts, Sports team are quickly becoming noted for their unmissable, fun and lively performances featuring a set-list full of their quirky, catchy and playful hits such as ‘Here’s the Thing’, ‘Fishing’ and ‘Margate’. 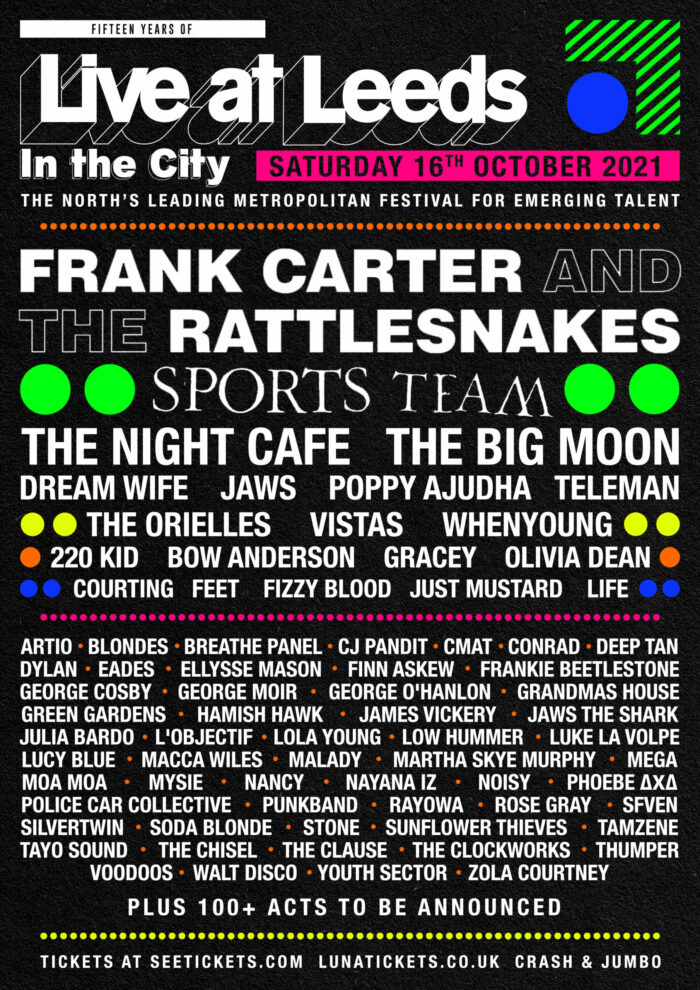 Live at Leeds also promises a bill featuring the best of emerging local talent, this year including hotly-tipped Leeds’ newcomers L’objectif, who will be following on from their recent sold out show at The Wardrobe. Independent Leeds based record label Dance to the Radio will also be showcasing their talent with label act Low Hummer, who have recently announced the release of their debut album ‘Modern Tricks for Living’

Live at Leeds consistently curates the best up and coming local, national and international artists.  Throughout the festival’s 15 years, Live at Leeds has firmly established itself as the North’s leading metropolitan festival for emerging talent.  At the forefont for showcasing new music, Live at Leeds is an inner-city music festival renowned for being one of the first places to spot new acts before they have broken.

Tickets for Live At Leeds 2021 are on sale now