Mystery Jets have announced a string of in-store events across the country in support of their sixth studio album ‘A Billion Heartbeats‘ which is due for release on 27th September via Caroline International.

They will be performing and signing copies of the album at Bear Tree Records in Sheffield on 29th September. A full list of in-stores and tour dates can be found below. 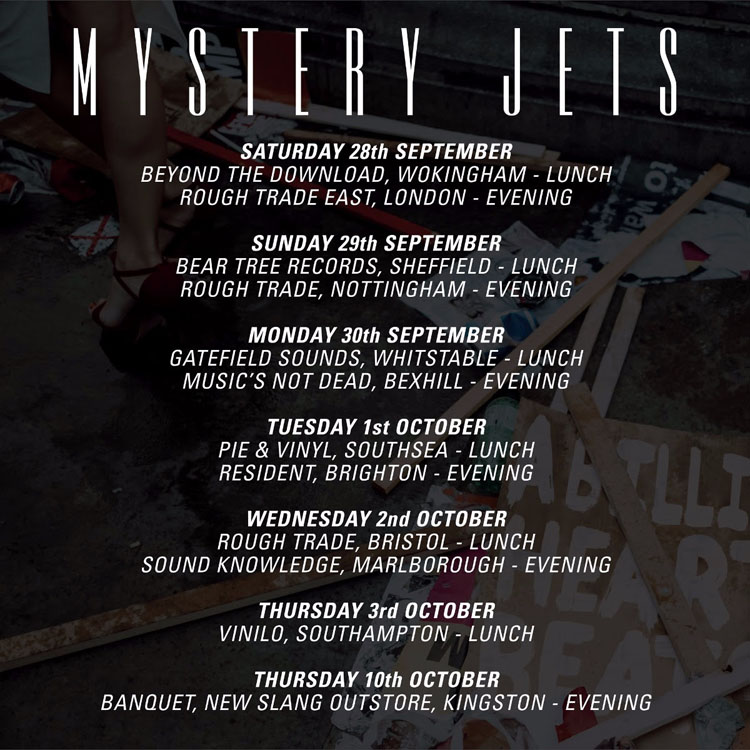 Mystery Jets announce that their sixth studio album ‘A Billion Heartbeats’ will be released on 27thSeptember on Caroline International.

The band also today release ‘Screwdriver’, the first single to be taken from the album. Listen here:https://MysteryJets.lnk.to/ScrewdriverSo

Screwdriver is an uncompromising look at the rise of the rebranded alt-right in the UK, built around a powerfully positive message: “Fight them with love / then the world will be ours“.

Each room of the house in the video is a metaphor for the different sections of society in the UK. It wraps around the narrative of the song, that in order to overcome adversity, you have to “Fight Them With Love”. All great albums start from a unique perspective. But, try a window on the Strand, in an abandoned office block, overlooking the kind of political upheaval London hasn’t seen in a generation. Blaine Harrison was living as a property guardian right around the corner from Trafalgar Square when he found himself witness to an entire year of protests. Every weekend from January 2017 on, people were marching for a different cause: “In the space of six months it was Black Lives Matter, the huge ‘Our NHS’ march, Unite for Europe,” he recalls.

Mystery Jets are on a UK tour later this year and can be seen at the dates below: