It was never Nick Hodgson’s plan when he left the Kaiser Chiefs in 2012 to go on tour. The plan was to stay at home writing and producing for other people. After five years of  writing songs with everyone from Shirley Bassey to Rat Boy via Mark Ronson and John Newman, the plan changed.

His solo album Tell Your Friends came out on 26th Jan 2018 to great acclaim: album of the week in the Sunday Express, 4* in the Evening Standard and Dork Magazine (‘Hodgson’s innate genius shines brighter than ever before’), whilst The Sunday Times revelled in ‘this lovely album’s artless, low-fi approach’ and Q Magazine noted that Hodgson’s ‘ear for a winning melody remains acute’.

The April tour will be his first since the arena and festival headline slots with Kaiser Chiefs when Nick played drums and was the principal songwriter. He will be joined by his fabulous new band, including members of Howling Bells and The Dead 60s. Expect to hear the new album alongside a few indie anthems courtesy of his back catalogue.

15th – Birmingham, The Actress and Bishop

Tickets are available from gigsandtours.com, seetickets.com and local ticket vendors.

Tell Your Friends is Out Now

Emerging back into earshot, erstwhile Kaiser Chief Nick J.D. Hodgson is pleased to reveal his debut solo album Tell Your Friends. The album was released on January 26th 2018 via his own label imprint Prediction Records and is available to order here

As main songwriter and founder member of Kaiser Chiefs, Hodgson already has an enviable record of global hits under his belt, including number 1 single Ruby and I Predict A Riot. Since leaving the band in 2012 he has written and produced for other artists, and has seen success in this new world with the likes of Mark Ronson, John Newman, Hurts and Ratboy.

A solo career was not something Hodgson was even considering, as he explains: ‘It was a long time since I’d written a song just for myself…and then I wrote Thank You”.

Thank You was written one night in Leeds when Hodgson was suffering from man- flu and waiting for an email that never arrived about a track he had co-written for another artist. It proved a pivotal moment in the making of Tell Your Friends, and was quickly followed by first single Suitable and RSVP in the same week: “I suddenly thought, OK, let’s make this a proper album.”

All the tracks were written and recorded at Hodgson’s home studio in London in the summer of 2017. And as quickly as the ideas came to fruition, the album was completed when he “…couldn’t write any more and knew that it was finished.” It was produced alongside Dave McCracken (Ian Brown, Depeche Mode) whom he met on the Ivor Novello judging panel, highlighting again the serendipitous creation of Tell Your Friends.

Hodgson played all the instruments himself, aside from a guitar solo by Kaiser’s cohort, Whitey on Feel Better, violin on Don’t Forget To Go To Sleep courtesy of Anna C Hodgson, and My Own American Dream features The Music’s Rob Harvey (keeping it in the Leeds family) on backing vocals.

Adept at his craft, Tell Your Friends marks Hodgson’s leap from band member to solo artist, and is a collection of songs that sees him expressing himself in a more personal way than ever before: “The lyrics are very honest, I wanted to express myself on this record, delve a little deeper and draw out some feelings I’d never touched on in songs before… I’d mainly written with someone else’s voice in mind, so the lyrics would reflect that. I would shy away from writing very personal things, but with this album I thought there’s no point doing it unless it’s honest.”

Encompassing his knack for a melody, the album basks in his ability to conjure a great lyric and punchy chorus, be it about love, frustration or fear. 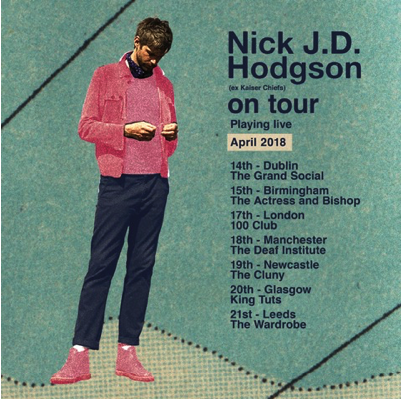