Hailing from South London, D-Block Europe are a collective of artists led by Young Adz and Dirtbike LB. Not being constrained to one genre, their music explores different sounds while showcasing their impeccable bars and staying true to their individual style. Meeting at school and forming a friendship, Dirtbike LB watched Young Adz start to make music, releasing his first mixtape at the age of 13 entitled ‘Da Prodify’. He continued to create and release music which lead to him being signed to Universal at the age of 15 and gain recognition as an artist. Their collaborative music didn’t come around until 2014 where Dirtbike LB admits is when he finally took the steps to begin creating his own music after watching and supporting Young Adz’s creativity. From that moment, their music started growing from strength to strength seeing them find support from platforms such as Link Up TV, SBTV and being featured on Westwood’s Crib Sessions and Young Adz’ memorable Fire In The Booth.

With moments of quiet from the pair, their hard work and dedication to their sound hasn’t stopped, as they are constantly experimenting and cooking up new sounds. Their motivation and determination to push their sound has carried them through, leading them to gain the attention of legendary D-Block (JadaKiss, Styles P, Sheek Louch) after Young Adz had toured with JadaKiss. They were co-signed by the label at the beginning of 2014 to bring to life D-Block Europe. Compromising of various artists, Young Adz and Dirtbike LB are at the forefront of the group, pioneering their individual sounds across the ocean.

The pair’s debut mixtape ‘Home Alone’ peaked at #6 in the UK official charts in February, remained in the top 40 for 8 weeks and has sold 85,000 album sales internationally. The start of the year also saw them selling out Kentish Town Forum in less than an hour and a Wireless Festival show that was shut down due to overcrowding. D-Block Europe continue to push boundaries in the latter part of the year as their single ‘Home P*ssy’ held #20 in the chart for two weeks running whilst hitting the B-List for 1Xtra, it also currently sits at over 4.5 million YouTube views. Their follow-up single ‘Nookie’ feat. Lil Baby rolled out via GRM Daily and racked up to 100K views in 40 minutes, hitting nearly 800K by the end of the day and finishing in the charts at #13, their highest ever singles entry. Their end of 2019 tour sold out Alexandra Palace in two minutes flat which lead to a second date addition and yet another sell out on top of a venue upgrade for their show in Glasgow. A further six dates were added due to phenomenal demand including, Sheffield, Manchester, Liverpool and more. In 2020, D-Block Europe are predicted to take the world by storm. 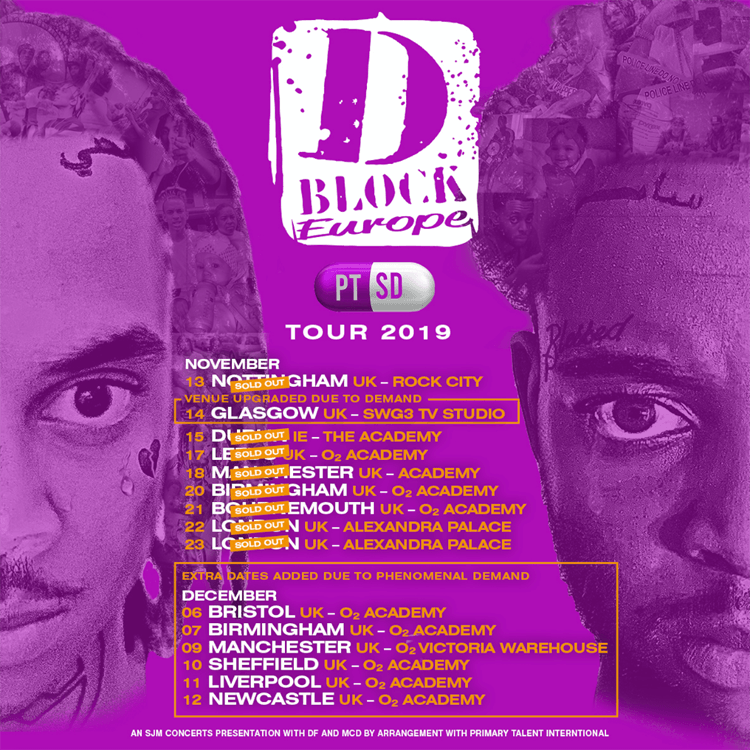