After much anticipation BROODERS can announce the line-up for RIFFFEST #2, their annual celebration of all things fuzzy, scuzzy and buzzy, which will take place at LEEDS BELGRAVE MUSIC HALL on SATURDAY 25 JANUARY 2020. In partnership this year with Superfriendz, BROODERS have been able to curate a ground shaking array of the biggest and the best on the scene at the moment and, with the most hectic expectations in mind, this is a line-up not to be missed.

The festival this year is proud to host a wealth of talent from across the underground scene in the UK, with proceedings kicking off with heavy and chaotic light-heartedness from Hull riffers 99% COBRA. Following this controlled anarchy, we will be cradled into the caring embrace of Leeds’ almighty DENSE before being unsuspectingly thrown around by their garage rock-infused intensity.

Should you think things might calm down from there, you’d be very wrong. Making their mark once more on their home stomping ground, DEAD NAKED HIPPIES will be screaming, shouting and tearing through your eardrums like a force of nature. Then, keeping with the vein of hard hitting intensity, CALVA LOUISE will be next to grace the stage with their psych-infused, heart pounding, ear shaking riffs.

Hosts BROODERS will be up next and keen to deliver on their promise to astound Leeds with something spectacular. After a six-month absence from the live scene, despite a wealth of single releases, the band have been building serious anticipation for their return to their hometown. Expect the dangerous, high octane fierceness that has been dwindling since their hibernation to come back stronger than ever.

Penultimate to the headliners is something beyond the realms of intensity we’ve so far become exposed to. STRANGE BONES bring a ferocity like no other. With a reputation for live shows that resonate with genuine menace, no one can ever know what to expect from Blackpool’s punk influenced, road tested quartet. Out of the frying pan and into the pits, this is not one to be missed.

Finally, onto the headliners. Much like the creature they name themselves after, CROWS are as mysterious as they are threatening. With an edge of instability and uncertainty to their every breath, CROWS will venture from London to bring something huge to RIFFFEST #2. Ranging from reflective and melancholic to outright bone crushing intensity, they are a band that really do it all in the space of one all-consuming performance. Expect the unexpected and prepare for something out of this world. 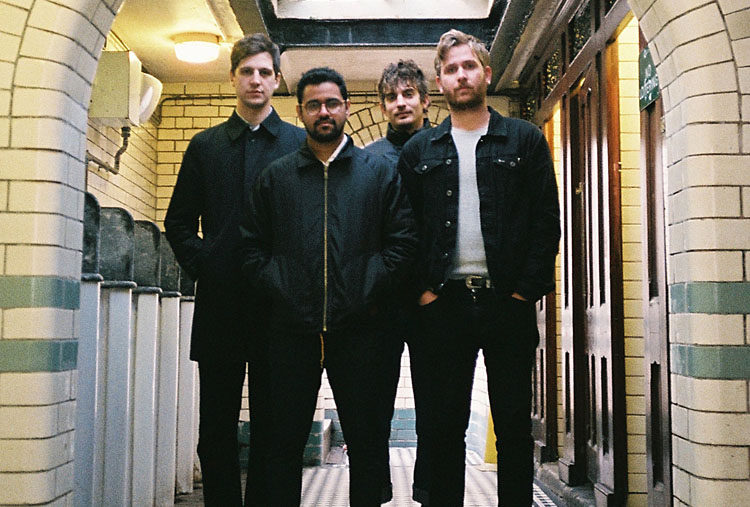 CROWS formed in 2015 and have since built a considerable following for the intensity of their live shows which have seen band members break bones as well as instruments. Having previously supported the likes of Girl Band and Wolf Alice, the band signed to Joe Talbot’s label Balley Records, released their debut album Silver Tongues, and took their deafening live show on tour with IDLES earlier this year.

Silver Tongues was recorded in near total darkness to build a sense of atmosphere, and confidently showcases a band comfortable across a spectrum of sonic avenues; from the monolithic noise-rock of the title track to the skyscraping Wednesday’s Child to the blissed-out closer Dysphoria, each listen reveals new layers and new ideas.

The album is a huge step forward for the band, not only musically but emotionally. A touring band who eat, sleep and bleed together, the album rightly took time and, now, both CROWS and the listener can reap the rewards of their patience. 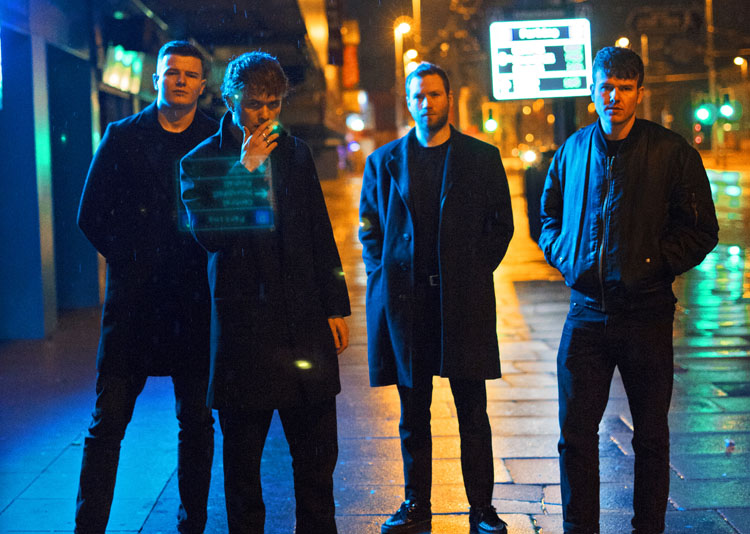 STRANGE BONES come from Blackpool, and Blackpool is STRANGE BONES. A town in Lancashire but a town not ‘part’ of Lancashire. This is a town of total political autonomy, fiercely independent of mind, body and spirit. Not ‘part’ of anything except itself. Strange Bones could come from nowhere else.

Like the town they hail from, STRANGE BONES have seen a lot in their short history. Brought up with punk rock by a father who not only lived and breathed the world of punk, but filmed the whole thing too. John and Karen Bentham realised in the 1980s that somebody better capture all these bands coming through the North West, so they set out with a cine camera to do just that. Filming everybody from the UK Subs to GBH, Black Flag to Throbbing Gristle, they filmed them all

When their boys came along they spent nights educating these wide-eyed kids to the magic of rock music played loud and fast but, above all, for a purpose. Do what you want boys, but do it because you believe in it. While you were watching Blue Peter, STRANGE BONES were watching Black Flag live from Leeds. With this education and a belief in their talent, in their early teens they formed a punk band and played almost 1000 shows together around the world in Japan, the USA, Australia, Italy, Spain and Germany. They toured with Rancid, did a Maida Vale session and a Big Weekend for BBC Radio 1. Had a Zane Lowe Hottest Record and won XFM Awards.

Strange Bones are a four piece from Blackpool. Bobby Bentham [vocals and guitar] Will Bentham [bass and vocals] Jack Bentham [guitar and vocals] and Stuart Newburn [drums and vocals]. They are putting loud music out again. It’s worth listening to because it has a purpose. Festival appearances in 2019 included Download in the UK and France, Live at Leeds, The Great Escape and Reading and Leeds. 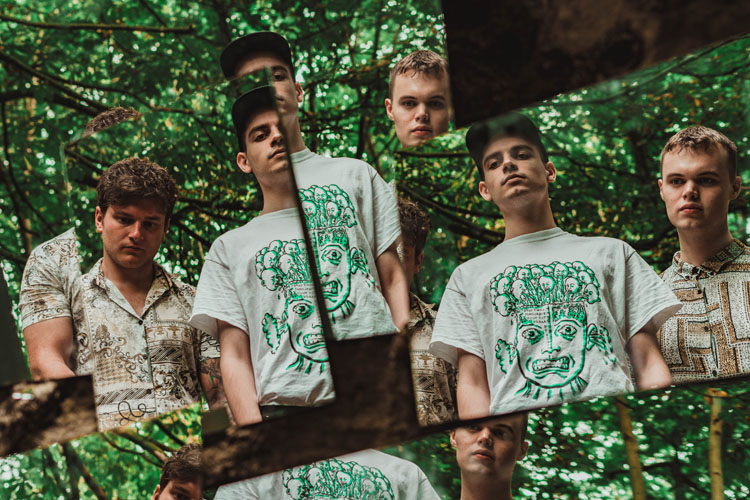 BROODERS are a fuzz-crazed psyche-grunge power trio that are screaming to be heard. They released their self-titled mini album in 2017 and gained support slots with bands such as God Damn, Bass Drum of Death, Hands Off Gretel and many more. The band have released numerous singles which have received critical acclaim from publications such as The Skinny, Discovered, Upset and It’s All Indie. They also worked alongside independent label Come Play with Me to release a vinyl 7” single, have been championed by BBC Introducing and Amazing Radio, and played several full UK tours.

Their sonic whiplash has also graced stages at festivals such as Y Not, Tramlines, Dot to Dot, Sound City, The Great Escape and Humber Street Sesh, and the wheels are now in motion for the new year with a full UK tour, European dates, further releases and videos.

Throughout their existence, the band’s releases, extensive gigging and press coverage have gained BROODERS a fierce reputation for being one of the most exciting bands on the darker side of the UK underground riff-based scene. The beauty is that the best is still to come. 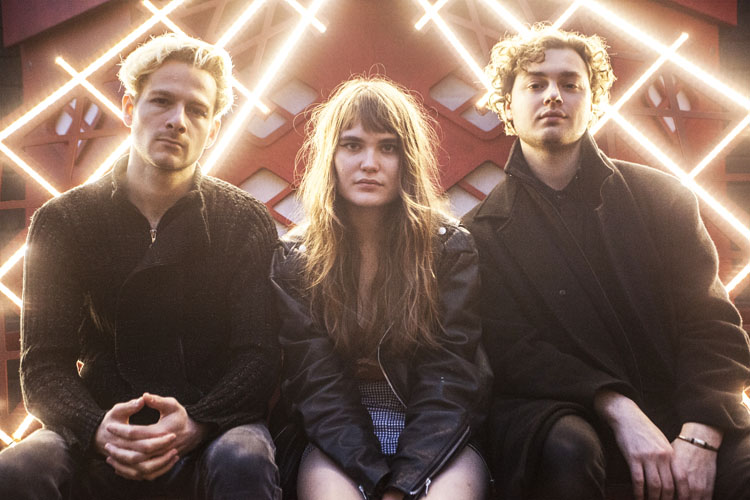 From the meek to the mighty, even superheroes experience growing pains. Yet, whilst the world finds itself in peril, there’s a squad succeeding in their mission to save us all from ourselves and fight for a greater good: CALVA LOUISE. Devastatingly fierce to the power of three: Jess Allanic, from Venezuela, with her unapologetic guitar shredding and incendiary vocals that stun those who stand before her, turning bouncing into an Olympic sport; Ben Parker, from New Zealand, with the strength to pummel a drum kit into submission alongside his knack for impeccable graphic design; and bassist Alizon Taho, from France, a tech whizz building a wall of noise with thundering rhythms and hand-built pedalboards.

As CALVA LOUISE, they’re an unstoppable force. Since embarking upon their adventure together at a London music night, the trio’s quest has grown from an innocent chat about graphic design to unleashing their debut album Rhinoceros. Naturally metamorphosing into enthralling melodies of fiery hooks and raucous fuzz, the band and their coming-of-age tales unite worlds of imagination with truth and punky picaresque brat pop.

CALVA LOUISE now reside in in Manchester and word is spreading as fast as their music. Already they’ve received extensive support from Huw Stephens and Abbie McCarthy on BBC Radio 1, Front Row on BBC Radio Four, as well as Radio X and Amazing Radio. Having supported the likes of Spring King, The Blinders and Albert Hammond Jr on tour, the band have left a trail of beautiful destruction the length and breadth of the UK. One of the most authentic and fearless punk-pop trios on the planet, always ready to unleash havoc on the conscience with music that will save our souls. 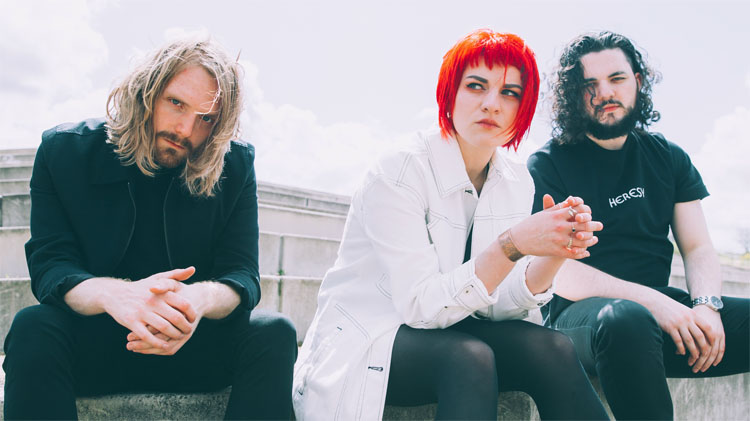 Relentless and punchy alt-rock outsiders DEAD NAKED HIPPIES recently returned with their exuberant new single Eyes Wide. A coming of age, outsider anthem, it’s a huge statement of intent from the Leeds based band, showing they are ready to take arms. Eyes Wide was produced and mixed by Grammy and BRIT Award nominated producer Tom Dalgety [Pixies, Royal Blood, Rammstein] and mastered by Robin Schmidt [Placebo, The Black Keys, Pale Waves]. It is the follow up to visceral single Young Male Rage which gained support and airplay from BBC 6Music.

DEAD NAKED HIPPIES have had a whirlwind last 18 months with extensive touring across the UK, sharing stages with the likes of Dream Wife, IDLES, Queen Zee and DZ Deathrays, as well as performing at Leeds Festival, 2Q Festival, Twisterella Festival, Humber Street Sesh and Stockton Calling. They have received support from Steve Lamacq and Tom Robinson at BBC 6Music, BBC Introducing, KCRW and Amazing Radio, as well as coverage from DIY, Clash, The Independent, Metro and DORK. The band are extremely open about what drives them and are not afraid to discuss confrontational topics, speaking about self-love, mental health and gender in an open and unapologetic way, both in their music and in conversation. With frenetic and hard hitting live shows, they are quickly earning a reputation as one of the most exciting live acts in the UK music scene right now. 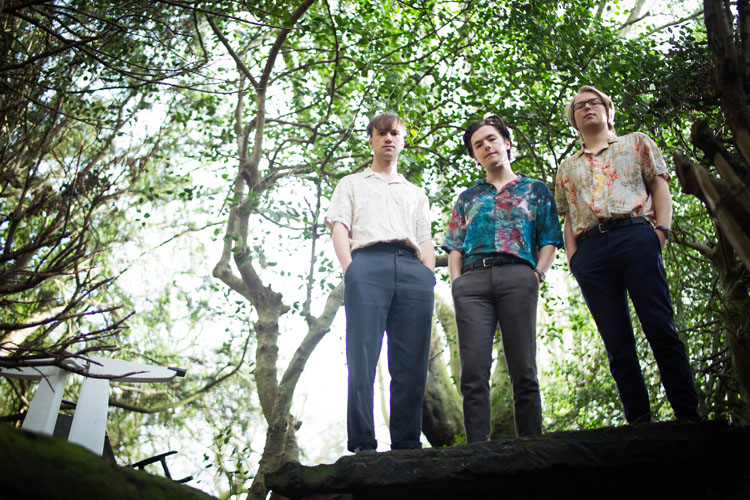 DENSE play feral live shows. They bring with them the thickest fuzz, intricate melodies and a raucous, chaotic energy to any stage that they step on. Since forming in Leeds in late 2017, the psychedelic garage trio have ripped apart any stage in any venue they have entered, from dingy basements to some of the most respected venues around the country. DENSE have seized every opportunity to create their savage blend of heavy riffs and textured sonic anarchy for each and every show they have played, using just one electric guitar, one bass guitar, one drum kit and one menacing voice.

DENSE’s reputation, especially in the North of England, totally eclipses their discography. The band’s long awaited self-recorded and self-released debut single perfectly encapsulated the ferocity of their trademark live show and propelled them into support slots with the likes of Avalanche Party, Prettiest Eyes and Flat Worms; a partnership with Futile Bookings and Management, who boast some of the best upcoming artists from across Europe on their roster; as well as a collaboration with Leeds label Come Play With Me, which will see the band’s second single released on 7” vinyl at the end of this year. 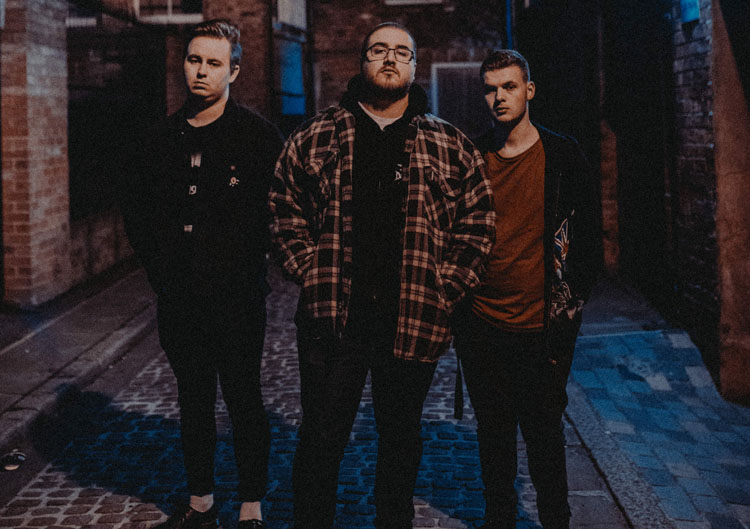 99% COBRA is a three-piece experimental mathcore band from Hull with influences ranging from The Dillinger Escape Plan, Death Grips, The Prodigy and Glassjaw. Formed in 2018 they released their debut EP, Programmed to Coalesce, in April 2019 and have played festivals such as Humber Street Sesh and Tech Fest, and shared stages with the likes of Palm Reader, Coilguns, Monuments and Black Tongue. 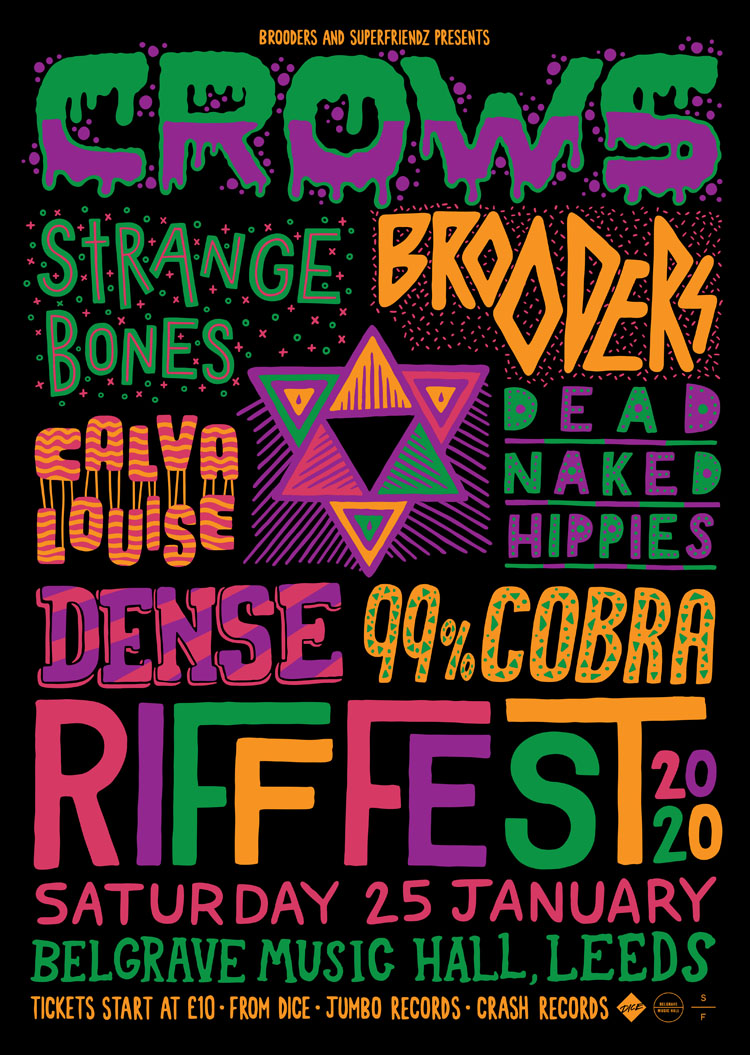