Bedford rock outfit Don Broco have fellow rockers Deaf Havana who return to the stage after two original members left the band during the pandemic. Brothers James and Matthew Veck-Gilodi reconnected and started writing new songs together, finding the inspiration to carry on and have released lead single ‘Going Clear’ from their new album out in July – ‘The Present Is A Foreign Land.’

YUNGBLUD invites Nova Twins to the party.  The British duo are rewriting the rules of rock bands. Amy Love and Georgia South are readying the release of much talked about second album ‘Supernova’ in June and will be joined by Daisy Brain, otherwise known as alt rock singer songwriter WiIl Tse.

On Thursday 24th March, not just one legend of British Music will take to the Royal Albert Hall stage but two as Paul Weller joins nutty boys Madness. Paul Weller & Band will perform a very special acoustic set following the release of his 16th Studio album chart topping “FAT POP (Volume 1)” last year and the magnificent, “LP ON SUNSET” in 2020. Paul Weller remains a true British icon, with a career in music spanning six decades. Weller has released an extensive back catalogue of top 40 albums across The Jam, The Style Council and his solo releases, including seven number ones.

Joining stone, cold British rock legends The Who, are The Wild Things, a group formed by actor Sydney Rae White and Rob Kendrick when they met during the stage production of Quadrophenia.  The Who legend Pete Townshend has since invited them to his studio and they made 4 tracks, with Pete producing, for their forthcoming new album ‘Afterglow’.

Liam Gallagher plays the Saturday night at the Royal Albert Hall and will be preceded by Kid Kapichi, punk rockers from Hastings.  They have achieved a Radio 1 ‘Hottest Record In The World’ and support across the station. Rising Liverpool indie outfit RATS will kick the evening off too. 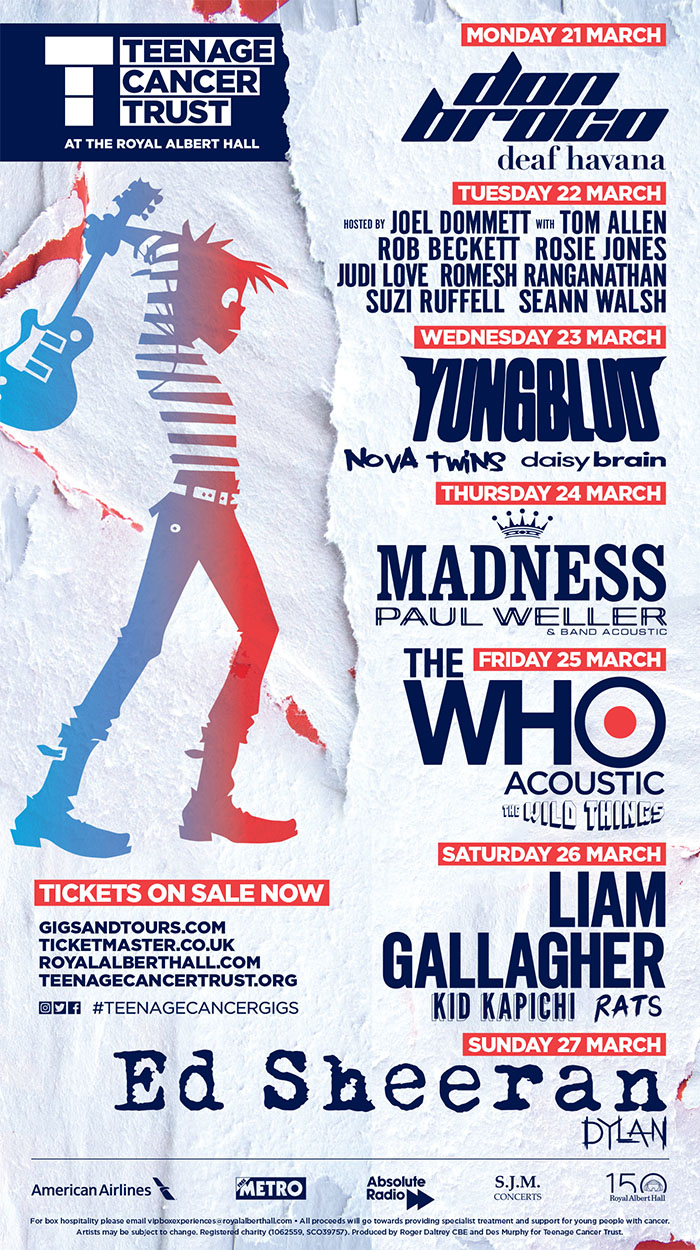 Perhaps the world’s biggest pop star, Ed Sheeran rounds out the shows this year and he will showcase special guest and fellow Suffolk singer-songwriter Dylan.  Songs like ‘You’re Not Harry Styles’ have gained attention from music press in the last year and she has just released new song ‘No Romeo’.

And for the legendary comedy night, 5 of Britain’s brightest and best were set to bring the good times to the Royal Albert Hall.  And now they are joined by East London native, hit stand up and now national star Judi Love.  Seen as a panelist on ITV’s Loose Women, a contestant on Strictly Come Dancing and even Celebrity Masterchef. No end to her talents, Judi will demonstrate her original skill of just making us laugh.

The iconic concert series has featured the greatest music and comedy for two decades, raising money for Teenage Cancer Trust and driven by Teenage Cancer Trust Honorary Patron and The Who icon, Roger Daltrey.  But in 2020, just as the concerts were about to celebrate 20 years of legendary moments, COVID-19 shut them down, with lockdown starting on the day of the first scheduled show. 2021 went the same way, so it is a more than welcome return for this vital charity event, which will run from March 21-27th.

The lost shows of the last two years meant Teenage Cancer Trust missed out on around £2 million in vital funds to support young people when they needed help most.  Young people facing cancer have been hit hard by the coronavirus pandemic over the last two years – from damaging delays in diagnosis to increased strains on young people’s mental health and resilience, making it even harder to get their lives, education or early career back on track after treatment.

Specialist care and support delivered by Teenage Cancer Trust’s unstoppable nurses and youth support teams has been a lifeline to young people throughout the pandemic.  Young people with cancer have never needed that support more, which is why getting back on stage at the Royal Albert Hall plays such a vital part in making sure no young person faces cancer alone.

And eligible young people previously cared for at Teenage Cancer Trust hospital units around the country will visit the Royal Albert Hall throughout the week of concerts, and enjoy all the action from VIP seating.

Ever since The Who reformed for the first Teenage Cancer Trust Royal Albert Hall show in 2000, the annual events have witnessed some extraordinary, once in a lifetime shows from Noel Gallagher and Damon Albarn performing together for the first time ever in 2013, Sir Paul McCartney in 2012, plus the likes of Oasis, Muse, Niles Rogers & CHIC, Florence + The Machine and many more.  Some of the brightest lights in comedy have lit up the stage too, with an annual evening featuring the likes of Mo Gilligan, Kevin Bridges, Miranda Hart, Kerry Godliman, John Bishop, Frankie Boyle, Noel Fielding, Jon Richardson, Russell Howard, Russell Brand, James Corden and many more.

Friday 25th – The Who (acoustic) + The Wild Things

For line-up and ticketing information visit: