The second instalment of the phenomenal BRITs Week presented by Mastercard for War Child lineup has been announced with shows from The 1975 and Sugababes.

BRITs Week presented by Mastercard for War Child returns later this month with another incredible series of gigs, giving fans the opportunity to see some of the biggest and most exciting names in music in intimate venues across the UK – all whilst raising money for children whose lives have been torn apart by war.

BRITs Week shows will take place around The BRIT Awards 2023 with Mastercard on February 11 to celebrate another remarkable year in British music.

The prize draw to win tickets is open HERE

BRITs Week shows with The 1975 and Sugababes

for all those who subscribe HERE before 23:59PM on January 11

Fresh off the back of a sell-out arena tour, one of the biggest bands on the planet The 1975 will play a raucous show at Gorilla, Manchester, on February 1, and revered girl group and pop icons Sugababes will perform at The Garage on February 8. 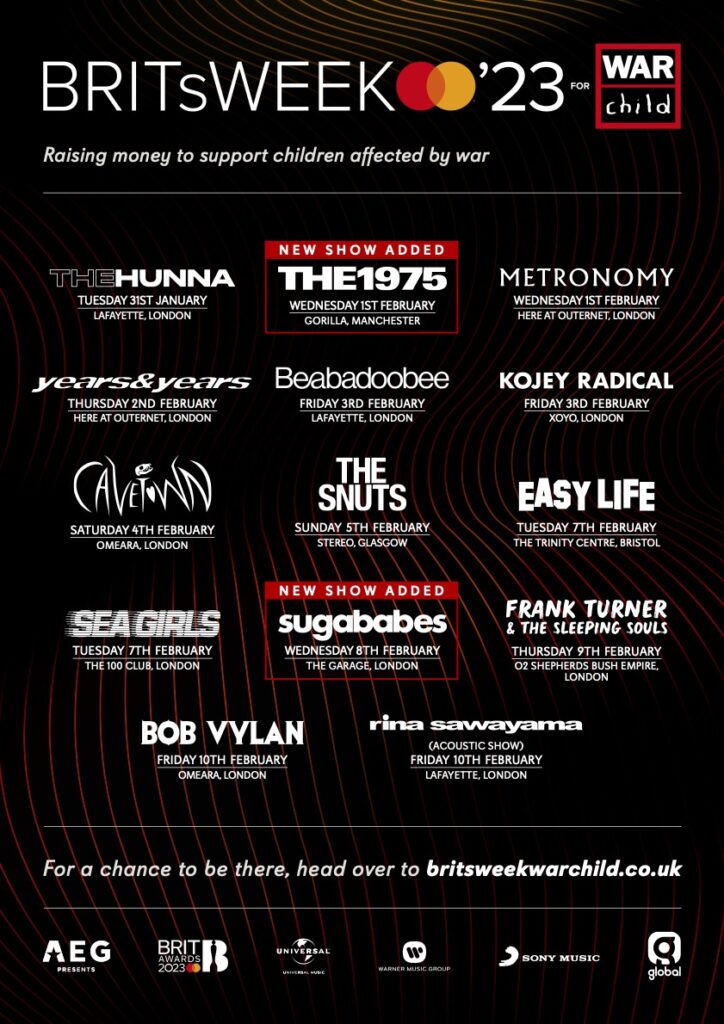 They join the brilliant lineup of artists performing in small venues around the UK. Kicking things off on January 29 at Lafayette will be UK rock outfit The Hunna. On February 1, Metronomy will be playing songs from their renowned catalogue at new London venue HERE at Outernet, followed by the phenomenal, chart-topping Years & Years on February 2. Recently appointed Independent Venue Week ambassador Beabadoobee will be playing at popular independent venue Lafayette on February 3, the same night as 2022 Mercury Prize shortlisted Kojey Radical will take to the stage at east London’s XOYO.

Cambridge’s critically acclaimed bedroom pop artist Cavetown will play at Omeara on February 4, with Scottish four piece The Snuts then taking BRITs Week to Glasgow, performing at Stereo on February 5. Indie-pop’s easy life will be heading down to Bristol for an unforgettable show at Trinity Centre on February 7, while back in London Sea Girls will bring their renowned live energy to the iconic 100 Club. Chart-topping singer-songwriter Frank Turner + The Sleeping Souls will play at London’s O2 Shepherds Bush Empire on February 9, then finishing things off in style on February 10, 2021 BRIT Rising Star nominee Rina Sawayama will turn her electrifying live performance into a stunning acoustic show at London’s Lafayette and genre-blending duo Bob Vylan will be playing tracks from their new Kerrang! Award & MOBO winning album at Omeara.