The Kingdom Choir, known for their angelic and spellbinding performance at the Royal Wedding of HRH Prince Harry and Duchess of Sussex Meghan Markle have announced a U.K. tour commencing in spring 2019. Tickets go on sale on 5 October 2018 at 9am at LiveNation.co.uk.

Their inaugural show at the Royal Albert Hall will mark exactly one-year of their remarkable and mesmerising royal wedding performance, a crown jewel in the London calendar for 2019. The Kingdom Choir are a unique group of seasoned and dedicated men and women delivering high quality performances time after time with their strong blend of choral discipline with the raw Gospel spiritual sound. Their extraordinary talent, sound, energy and ability to execute have kept them in high demand nationally and internationally for well over a decade.

The choir’s continued delivery of excellence has led to many public broadcast appearances such as Songs of Praise, BBC’s The One Show, ITV Good Morning Britain and Sunday Morning Worship on BBC Radio 2. They have also featured in the film ‘Tube Tales’, the TV series Maisie Raine, an advert for Orange and have been featured alongside the BBC Philharmonic, ‘The Hurricane’ for BBC Radio 4s Easter Sunday Worship.

The Kingdom Choir have also today announced the release date and track listing for their highly anticipated debut album on Sony Music, ‘Stand By Me’. Coming out on Friday 26 October, the album features the choir’s much-loved version of Stand By Me that they performed at this year’s Royal Wedding of Prince Harry and Meghan Markle. The choir’s diverse album track listing also includes captivating renditions of Beyoncé’s Halo, John Legend’s All Of Me as well as Stormzy’s Blinded By Your Grace Part 2. Also on the album is a brand new, emotionally powerful ballad written by members of The Kingdom Choir called Chases.

Tickets for The Kingdom Choir go on-sale to the general public on Friday 5 October 2018 at 9am at www.livenation.co.uk/ 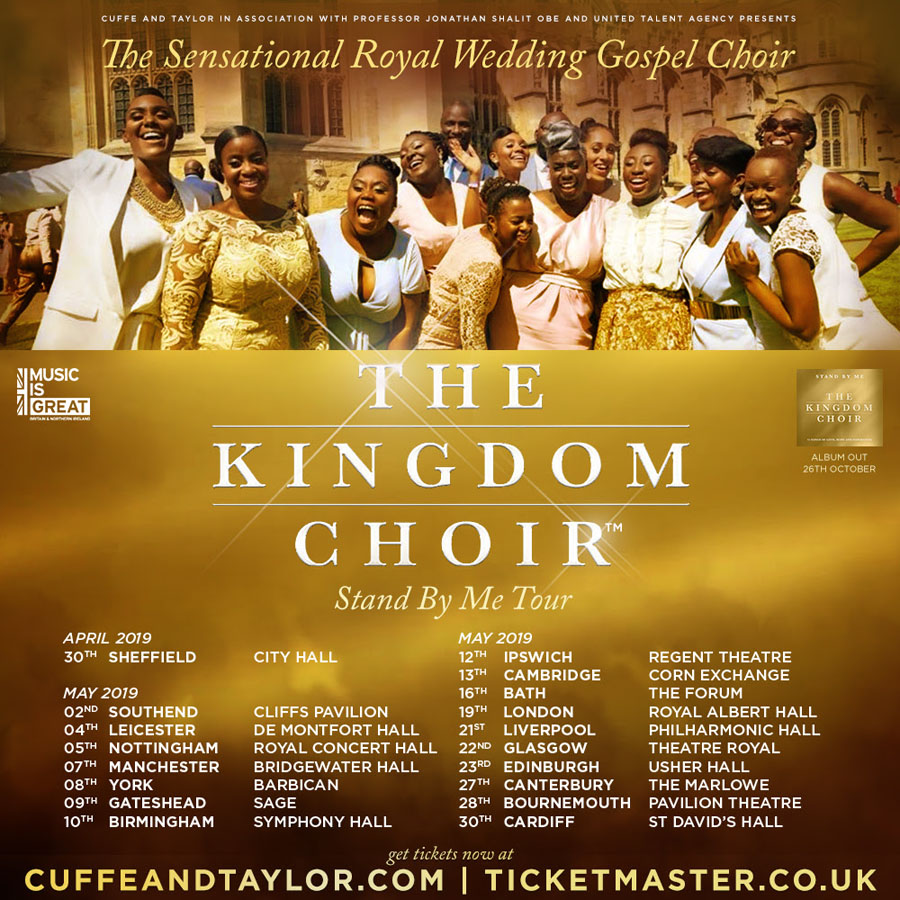