British pop icon, Rick Astley and Stockport five-piece, Blossoms announce they will appear together for two, special shows to perform The Songs Of The Smiths, after Astley joined the band on stage in London last night. The eyebrow-raising announcement confirms that Blossoms will become Astley’s backing band for a full set of theirs and fans’ most-loved Smiths songs, starting in Manchester on Fri 8 October 2021.

With a second announced date, taking place on Sat 9 October 2021 at London’s O2 Forum Kentish Town, Astley makes good on a suggestion made in a 2016 Rolling Stone interview that he’d one day perform an entire set of Smiths songs. Speculating that he’d ‘get lynched’ if he ever tried it in the band’s home town, expectations are instead of a race to grab limited tickets.

Tickets go on-sale for both dates at 9.30am on Fri 17 September 2021 from www.seetickets.com

Centred around the songs of Morrissey and Johnny Marr and releasing unforgettable hits like This Charming Man and Panic, The Smiths split suddenly and acrimoniously in 1987, leaving fans bereft. Rumours of a reunion have circulated for the past three decades, but have never been realised, with chances appearing more remote than ever.

Launched by his 1987 mega-hit, Never Gonna Give You Up, cemented into popular culture with the phenomenon of Rickrolling and adding to his 40 million album sales with the success of the 2016’s Number One album, 50, and his Top Ten 2018 album, Beautiful Life, Astley is a self-confessed fan of The Smiths, naming them amongst his favourite, ever artists. In 2013, Morrissey appeared to reciprocate by including a backstage photograph of him and Astley on the cover of a reissue of his 1989 single, The Last Of The Famous International Playboys.

Blossoms, themselves part of the British pop firmament with two, Number One albums to their name, including their Mercury Music Award-nominated, self-titled 2016 debut, have frequently covered songs by The Smiths, including Bigmouth Strikes Again as part of their live sets. Announcing their collaboration with Astley just before greeting a SOLD-OUT crowd at Manchester Arena on Sat 18 September 2021, the band finds themselves in the pinch-themselves position of performing many of their favourite songs in the company of a legendary voice of the same era. 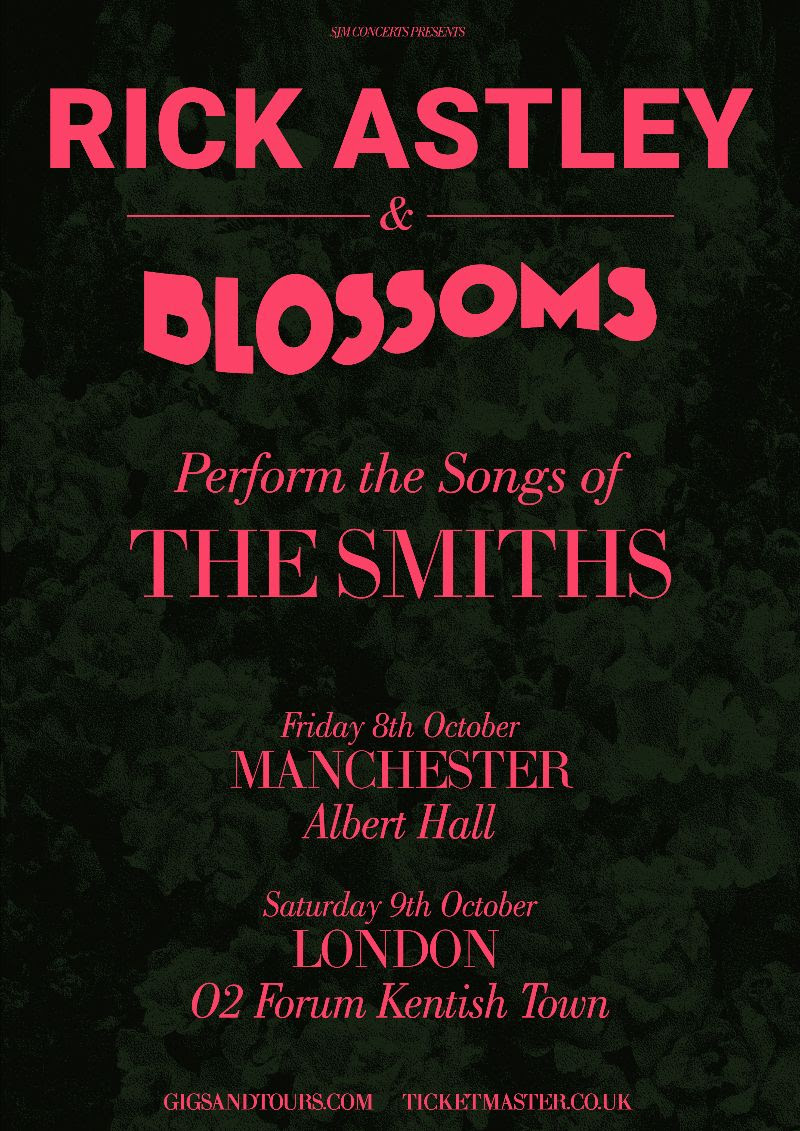 Blossoms frontman, Tom Ogden says: “The Smiths have always meant so much to Blossoms, with even their rainiest songs complete with wry humour and soul-reaching musicianship and melody. Their poppier moments are pure, joyful, danceable poetry. Imagine backing Rick Astley to play the songs of The Smiths? We’ve had wilder dreams, but not many. We’ll barely be able to believe it until it happens, but the dates are set, we’re studying every note, line and beat to say ‘thank you’ to The Smiths alongside Rick and do both of them proud.”

Rick Astley says: “From the moment The Smiths emerged in 1983 I was hooked and it’s as a fan, with deep respect as a musician for Morrissey, Marr, Rourke and Joyce, that I’ll be joining the endlessly enthusiastic and talented Blossoms on stage to sing their songs. It’s no secret that it’s been an ambition of mine to turn an idea that first sounded crazy, making more sense as Blossoms and I talked about it and then rehearsed it, into a reality. These shows will be nights that I’ll never forget.”

Astley appears with Blossoms around arena shows taking place around the UK and Europe, continuing tonight (Tue 14 September 2021) at the SECC Armadillo, Glasgow and concluding at the AO Arena, Manchester on Sat 13 November 2021. Releasing a collection of career highs, The Best Of Me, in October 2019, the shows bring the artist and fans together to celebrate four decades of Astley’s music.

Blossoms just last month released their brand-new single Care For. Produced by James Skelly and Rich Turvey, it was the first new music the band since their double A-side Christmas single Christmas Eve (Soul Purpose)/It’s Going To Be A Cold Winter, released in 2020. Since forming in 2013, Blossoms have enjoyed widespread success including a BRIT Award Best Breakthrough Act nomination and sold 20,000 tickets in just one day for their historic, 2019 homecoming to Edgeley Park, Stockport.

For more information about Rick Astley and Blossoms’ future releases and performances, including The Songs Of The Smiths connect with them online at: