Greed, loathing, desire and despair.  Welcome to the world of real estate where you are only as good as your last sale and if your name isn’t on the board your currency has crashed.  Win a Cadillac or go home, you’re not welcome if you can’t make the grade.  Here you are in the real estate offices of Premiere Properties, a seedy little office full of men with testosterone, hopes, dreams and leads who will say anything to get that cheque.  Written by David Mamet in 1983 and winning him the Pulitzer Prize, Glengarry Glen Ross taps into the enduring role of the salesman.  A man who could, and should, be able to sell anything; in this case properties in the twin developments of Glengarry Highlands and Glen Ross Farms.  It’s a hard world, a world full of frustration and anger below the surface which bubbles over in heated and harsh exchanges, in back biting, in scheming and in the belittling of another to get just one rung further up the ladder.  It is no place for old men. 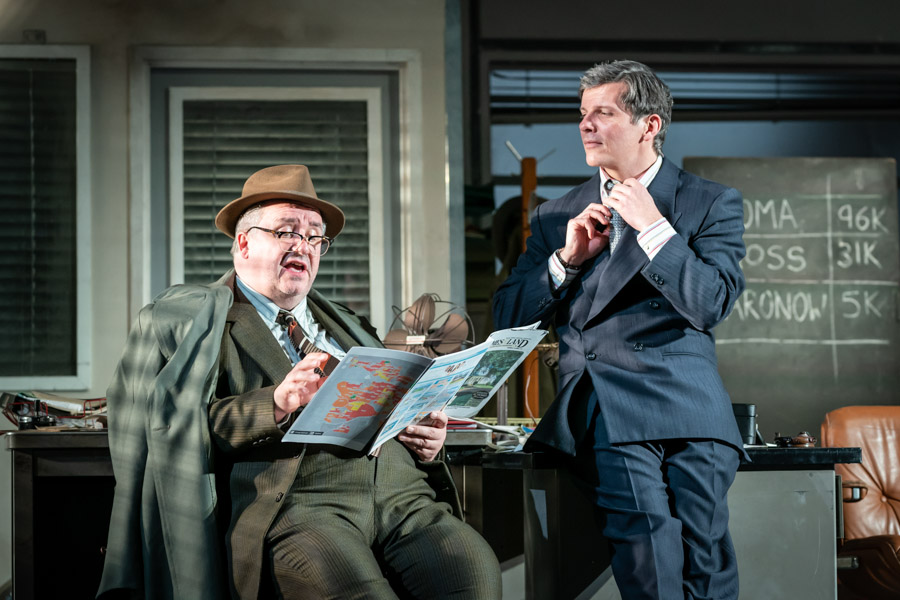 In this new touring production directed by Sam Yates and hot on the heels of the acclaimed West End revival the warts and all of such a life is laid bare for inspection over a two day period.  From the despair of Shelley Levene, a man with his best years behind him to Ricky Roma, a hard-nosed exploiter with all stops in-between; the salesman getting out, the one who is never quite good enough and the dreaded office manager holding others to ransom with the promise of the golden ticket lead. 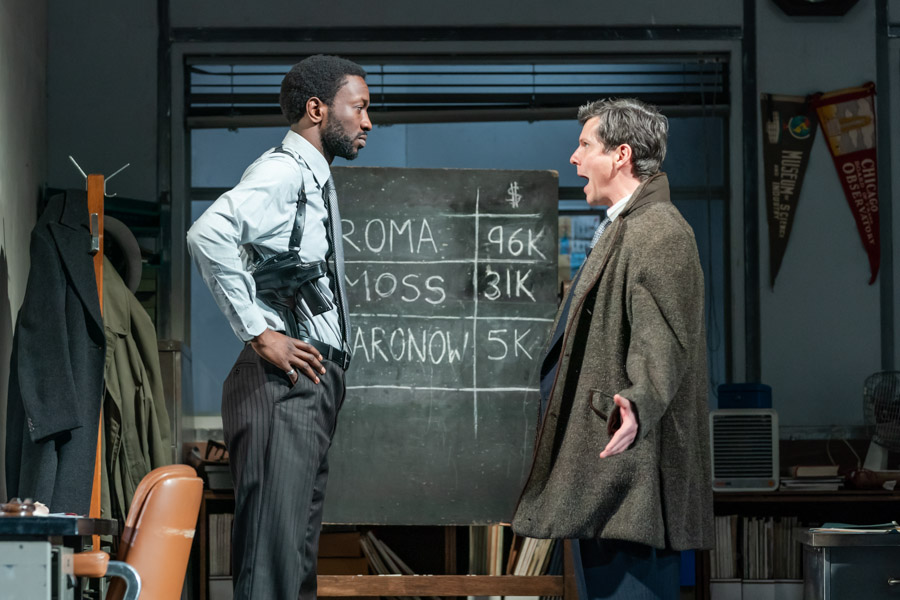 Mark Benton excels as Shelley Levene; a tragic figure on the slide quoting his past glories to anyone who will listen with a subtext of desperation only to be thwarted of his big chance to regain his position.  Denis Conway plays the angry Dave Ross with excellent timing firing the staccato rounds of Mamet’s dialogue with a sniper’s precision.  Each line hits home; the sense of a wasted life, despondency  and anger a perfect opposition to Nigel Harman portraying Ricky Roma with the right level of downright viciousness.  He is not in any way a nice man. 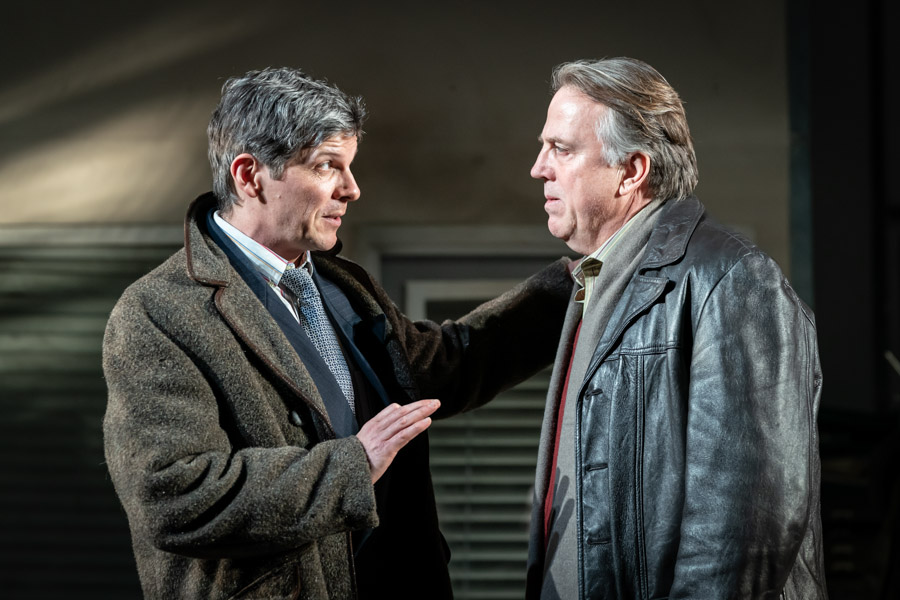 The rest of the cast round out the ensemble with aplomb; Scott Sparrow as office manager John Williamson injects the right amount of corporate corruption and sleaze into the role, dangling the promise of a good lead like a rare wine and who is not averse to being brought.  Will Jonson as the confused, self-doubting George Aaronow and finally James Staddon in a small but counterfoil role as James Lingk, the investor taken for a ride by the unscrupulous Ricky Roma.  Even Zephryn Taitte as Detected Baylen in a role as fleeting as it is important adds to the sense of impending doom and despair in the offices of Premiere Properties. 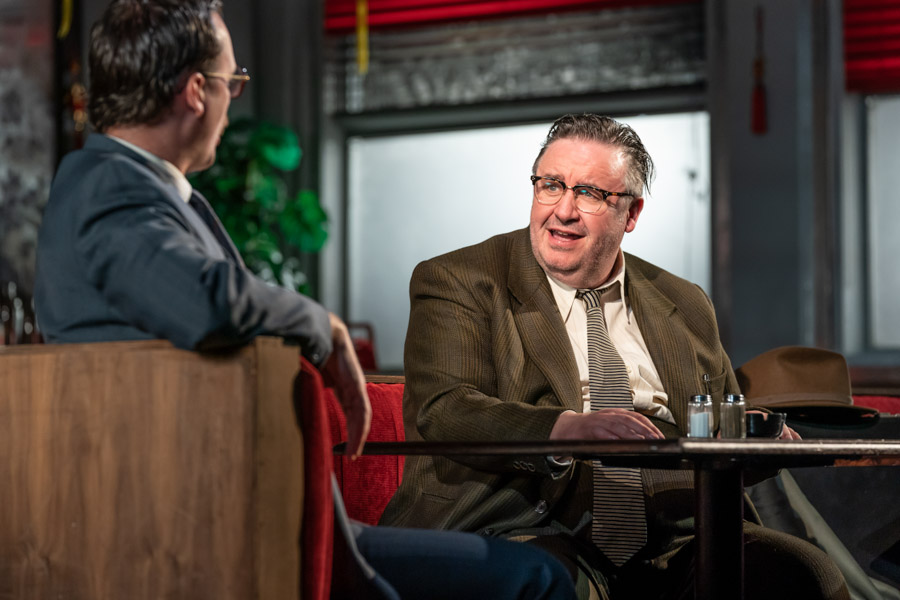 All in all the play moves along at a fair speed, leaving political correctness and modest language in its wake but for all the power there is something that isn’t quite right.  The sense of a dying way of life; the loss of control, the idea of all the characters just not knowing what happens next and for all the slight comedic asides there is no escaping the lingering sense of failure.    It is not a play for those easily offended by certain modes of speech but otherwise shows the complexities and competitiveness of daily life in a world where you win and you eat.  You fail and you watch others eat; a damning indictment of greed and how it impacts on those in the race to the top of that board. 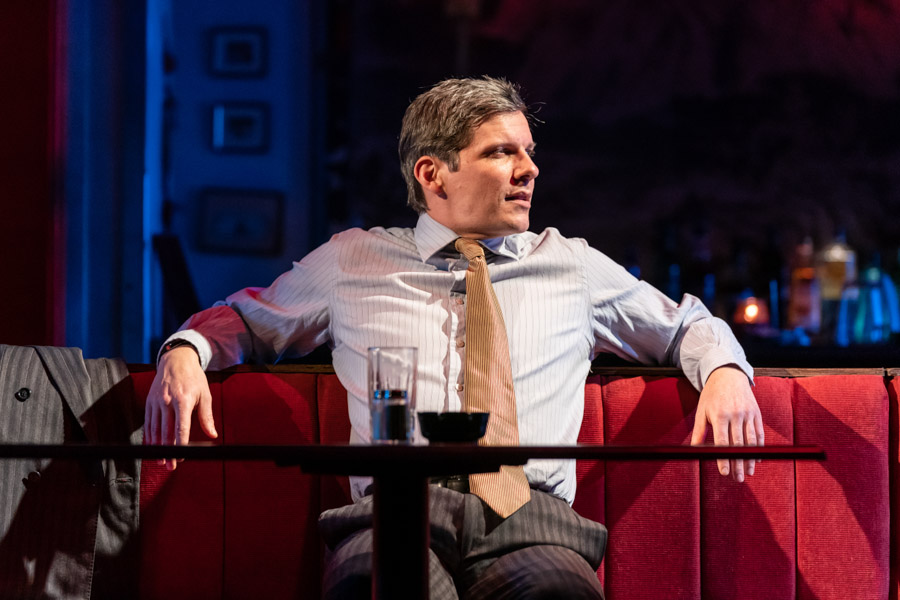