The legendary Jonathan Van Ness has today announced that he will return to the UK next February 2022 with his ‘Imaginary Living Room Olympian’ tour. Kicking off at Glasgow’s Royal Opera House on 17 February 2022, the show will continue at London’s Palladium on 19 February 2022, Manchester Opera House on 20 February 2022 and finally the Brighton Dome on 24 February 2022. Tickets go on sale at 10am on Thursday 16 December via AEGpresents.co.uk, AXS.com or ticketmaster.co.uk.

Famed for his role on the Emmy Award winning Netflix reboot series ‘Queer Eye’ where he shines as the hair guru and self-care advocate, Jonathan Van Ness will tumble into your hearts with a night of gymnastics, hilarious tales of their life as a nonbinary bad b*tch, and round off back handspring into triumphant show that will leave you wanting more. Don’t forget to warm up, and prepare to laugh for this Olympic level night of comedy.

In September 2019, he released his revelatory memoir, Over The Top: A Raw Journey To Self-Love, now a New York Times Best-Seller. Over The Top won the 2019 Goodreads Choice Award for Best Memoir & Autobiography and has been named a must-read book of 2019 by The New York Times, TIME Magazine and NPR to name a few. His appearance on “The Late Show with Stephen Colbert” to discuss the book, living with HIV and HIV stigma earned a GLAAD Media Award for ‘Outstanding Variety or Talk Show Episode.’ 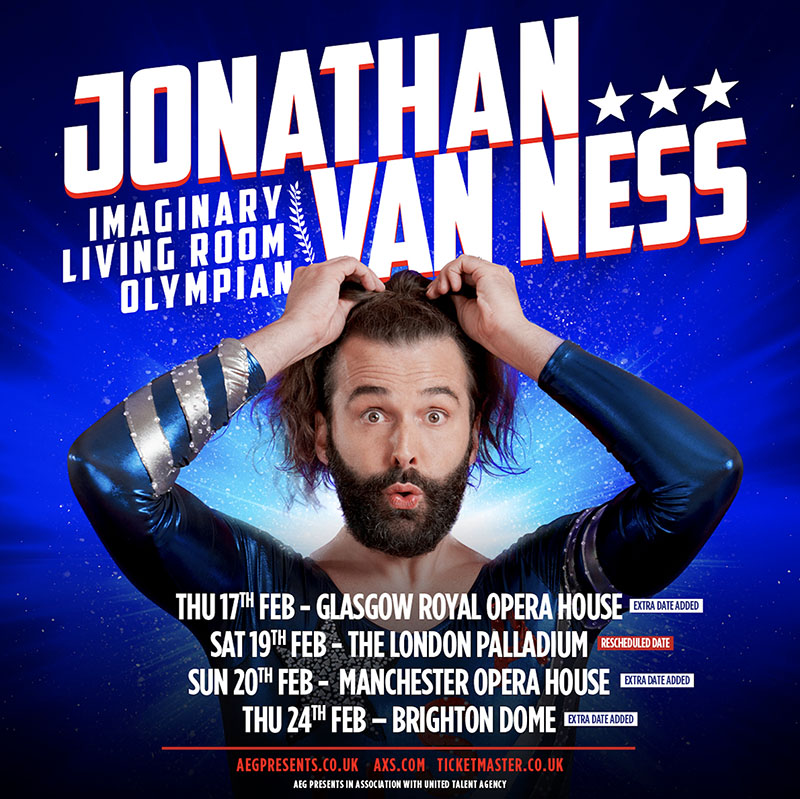 Jonathan is passionate about using his platform and voice for change. As an avid supporter of the LGBTQ+ community, he worked closely with Planned Parenthood and The Trevor Project on campaigns tied to the release of his book that focused on removing the shame and stigma that comes along with talking about sexual health, as well as the long-lasting effects of bullying and how to overcome it.

In December 2019, Jonathan made history as the first non-female solo cover star of Cosmopolitan UK in 35 years. In March 2020, Jonathan released his first children’s picture book, Peanut Goes For The Gold, about a gender non-binary guinea pig who does everything with their own personal flare. Most recently, Jonathan launched JVN, a haircare line that sees all beauty, serves all beauty, and honors the uniqueness in each of us. Driven to change the beauty industry from within, Jonathan worked with Amyris, a leading synthetic biotechnology company and bio manufacturer of clean, sustainable, natural ingredients. Together, they developed scientifically-backed haircare formulas, combining the best in effective and clean ingredients, creating an innovative, first of its kind haircare collection that celebrates hair health and the uniqueness of each person.

Tickets go on sale at 10am on Thursday 16 December via AEGpresents.co.uk, AXS.com or ticketmaster.co.uk.