Reading & Leeds Festivals announce today that a massive 6 headliners will perform in 2021 without any clashes as a second main stage is added to each site to accommodate an incredible line-up to mark the festival’s return. Headliners Stormzy, Liam Gallagher, Post Malone, Catfish and the Bottlemen, Disclosure, and Queens of the Stone Age will be joined by some of the most exciting talent in rock, indie, alternative, hip-hop, and dance including AJ Tracey, Doja Cat, Lewis Capaldi, Mabel, and Two Door Cinema Club, with even more yet to be announced. The three day festival takes place on 27-29 August 2021, returning to Reading’s famous Richfield Avenue and Leeds’ legendary Bramham Park, 27-29th August 2021. Tickets will go on sale at 9am on Thursday 3rd September, via https://www.ticketmaster.co.uk/reading-and-leeds-festival

Multi award-winning musician Stormzy is renowned for his epic live shows and his performance on next year’s Reading & Leeds main stages is sure to be one for the history books. A showman like no other, his remarkable ascent has been accompanied by his honest and relatable character. Known for evolving the underground musical landscape, as well as being a perennial political agitator, Stormzy is a true spokesman of black empowerment and social activism. Last year’s critically acclaimed Number One album Heavy Is The Head is testament to this; a record that is home to a necessary and important dialogue that’s equally fiery as it is refreshingly vulnerable. With a flawless show that is decadent, unpredictable, and second to none, his well-earned headline slot at this year’s Reading and Leeds will be colossal.

All-round legend Liam Gallagher, who was announced as a Reading & Leeds 2020 headliner, is confirmed to return in 2021. Having brought an epic show to 2017’s Reading & Leeds festivals, his appearance on the main stage next summer will no doubt be BIBLICAL. Liam’s career has been even more stratospheric in the past 12 months; his documentary As It Was, a second solo album Why Me? Why Not, and a triumphant sold out UK tour. 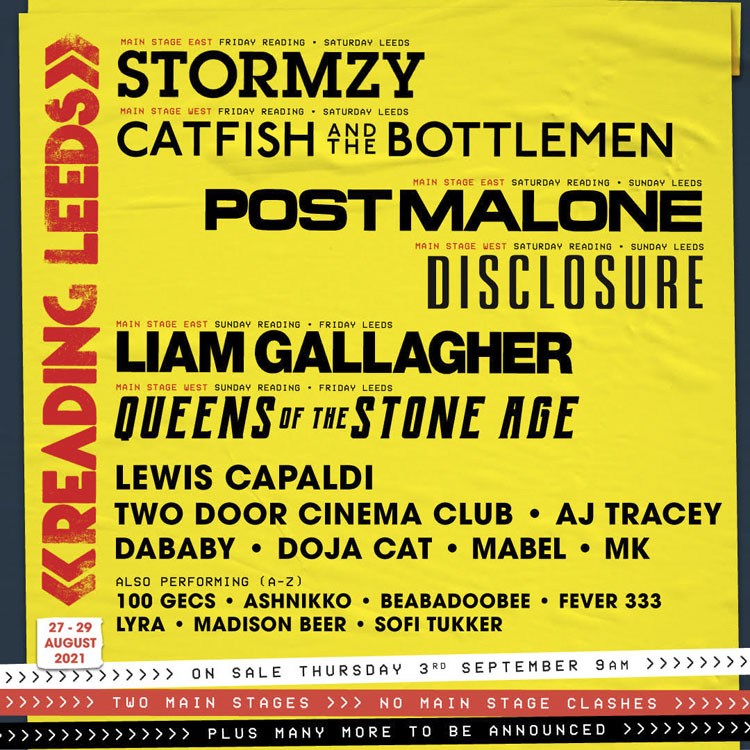 Undoubtedly one of the hottest names in the world right now, Texan superstar Post Malone returns to headline Reading & Leeds on his third appearance. ‘Posty’ has been on an unprecedented trajectory of success, including an incredible main stage headline appearance in 2019 which he followed with chart-topping album Hollywood’s Bleeding, yet another reason why he deserves such critical acclaim. Since being catapulted into fame, the post-modern popstar has had hit after hit including the inescapable ‘Better Now’, ‘Psycho’, ‘Circles’ and the aptly named ‘Rockstar’, he is now set to reclaim the headliner status.

Established as the UK’s must-see guitar bands, platinum-selling, arena-filling Catfish and the Bottlemen return to Reading and Leeds as headliners in 2021 having lit up the BBC Radio One Stage in 2015. The famously committed four-piece has been reluctantly caged since closing 2019 in the USA and a rush of early 2020 European shows, but now look forward to making more memories with their fans. With three albums of life-affirming, main stage songs ready to go, Catfish will uphold their ‘must-see’ title with a ferocious, hit-filled set in 2021.

Sibling production duo Disclosure will be bringing their unique, cutting-edge show to the festival for the fourth time along with dancefloor anthems such as ‘Latch’, ‘White Noise’ and ‘Help Me Lose My Mind’. Having just released their third studio album Energy, the brothers once again prove to be one most exciting and innovative dance artists around.

Disclosure said: “We last headlined Reading & Leeds in 2016 with our friends Foals, it was amazing fun and we can’t wait to return next year when it’ll be even more special.”

Californian rock royalty, Queens of the Stone Age complete the double mainstage headline slots, making their ninth appearance at the festival since debuting at the turn of the millennia. Their constant ability to produce iconic live shows and record-breaking albums, including 2017’s UK No. 1 ‘Villains’, that cements them as true heavyweights in rock music.

In addition to the brilliant headline acts, Reading and Leeds are delighted to announce several further additions to the line up. Returning to make yet another mark on the festival after an iconic 2019 is London’s rap icon AJ Tracey, double BRIT Award winner and Grammy nominated Lewis Capaldi, and chart sensation and fellow BRIT Award winner Mabel. Also set to join the bill along with Irish indie-pop favourites Two Door Cinema Club, Californian music star Doja Cat and dreamy indie phenomenon Beebadoobee.

With hundreds of acts set to play, Reading & Leeds is set to return as the ultimate festival weekend of the summer – defining and celebrating the sounds of modern ground-breaking music, as well as a world-class comedy line up.

Fans can be the first to hear further line-up announcements, artist news and much more by signing up to the newsletters at www.readingfestival.com and www.leedsfestival.com or via the official Reading & Leeds Festival app, available to download now on Android and iOS.

General tickets on sale from https://www.ticketmaster.co.uk/reading-and-leeds-festival