Sean Paul has today announced that he will be joining the line-up for the first ever RiZE Festival in Chelmsford this August. Performing on the Saturday, this dancehall legend, Grammy Award winner and much loved hit maker extraordinaire is a remarkable addition to the line-up. His performance at RiZE Festival will be one of his only UK appearances this year, guaranteeing a show that’s not to be missed!

Liam Gallagher and Stereophonics have previously been announced to headline the brand new RiZE Festival which will take place at the iconic Hylands Park in Chelmsford on Friday 17th and Saturday 18th August 2018.

Celebrating its very first year RiZE Festival brings together an exciting mix of the very best music from classic indie, pop, urban, dance and new upcoming talent across four stages. Hylands Park has a history of hosting world class events and this new local festival promises to bring an incredible weekend of live music plus a huge hub of the best food and drink on the festival circuit.

Tickets are priced from just £59.50+BF and are on sale now, please visit www.rizefestival.co.uk for official outlets. 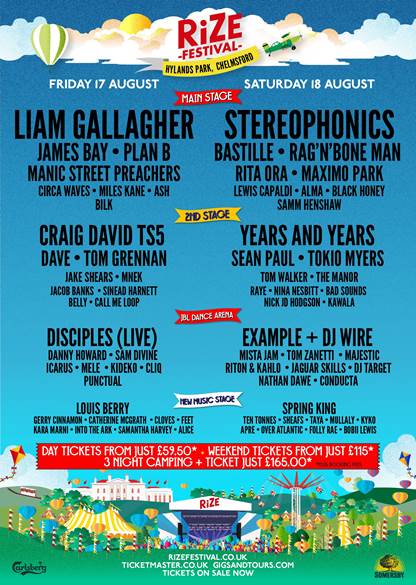