Already boasting a remarkable line-up featuring the hottest acts in modern alternative music, Slam Dunk Festival has further cemented its position as the only place to be over the May Bank Holiday weekend by revealing even more exciting names.

With driving guitars and powerful vocals dripping with Sam McTrusty’s trademark Glaswegian accent, Twin Atlantic will return to Slam Dunk Festival following their first appearance in 2008. With four stunning albums under their belt, the Glasgow group’s return is sure to be highly-anticipated among the Slam Dunk crowd. Their most recent release, ‘GLA’, features beautifully crafted anthems such as the soaring ‘Gold Elephant: Cherry Alligator’ and groove-laden ‘Valhalla’, set to come to life and mark their May appearance as a definitive festival moment.

Earning the respect of legendary names such as Tippa Irie and Horseman, who subsequently lent their vibes to feelgood track ‘The Town’, The Skints are set to inject a shot of sunshine straight to Slam Dunk Festival. Hard-hitting lyrics delivered by the talented multi-instrumentalist Marcia Richards, guitarist Josh Waters Rudge and percussionist Jamie Kyriakides are set to unite everyone in ska-punk spirit.

Poised to party at Slam Dunk Festival for their 5th consecutive year will be Grammy-nominated Californian legends Zebrahead. Loaded with infectious hooks and a world-famous frat-party live-show, the ‘Hell Yeah!’ heroes appearance promises to be a highlight of the festival season!

No strangers to Slam Dunk Festival, Set Your Goals will be returning to Leeds, Hatfield and Birmingham set to fill their stage with singalongs of ‘The Few That Remain’, ‘Summer Jam’ and ‘Certain’.

Armed with razor-sharp riffs and mesmerising ambition, Australian five-piece Northlanewill make their way to Slam Dunk Festival for a truly remarkable sonic experience. Producing masterpiece after masterpiece in the form of stand-out albums from the debut ‘Discoveries’, ‘Singularity’, ‘Node’ and the latest, ‘Mesmer’, the group have received constant recognition from Australia’s ARIA Music Charts as well as countless award nominations globally. Slam Dunk Festival 2018 will see Northlane return to the festival after their debut performance in 2016, delivering a transfixing spectacle across all three sites.

Responsible for full-throttle anthems such as ‘Wake The Dead’ and ‘Do Yourself a Favour’, Canadian kings of hardcore Comeback Kid are set to tear the Slam Dunk Festival stages apart when they return for the May weekender. The long-running hardcore outfit have built a concrete career on unrelenting evolution and flat-out intensity, all proven by a volatile exstentive back catalogue loaded with tracks that take on an incredible riotous form when translated to a live environment. Expect a fierce display of sonic power when Comeback Kid step onto the stage, their appearance is not be one to miss.

TICKET INFORMATION
Tickets on sale now and are available from http://slamdunkmusic.com/

Cost £49 or £55 including the infamous afterparty. All subject to booking fees. 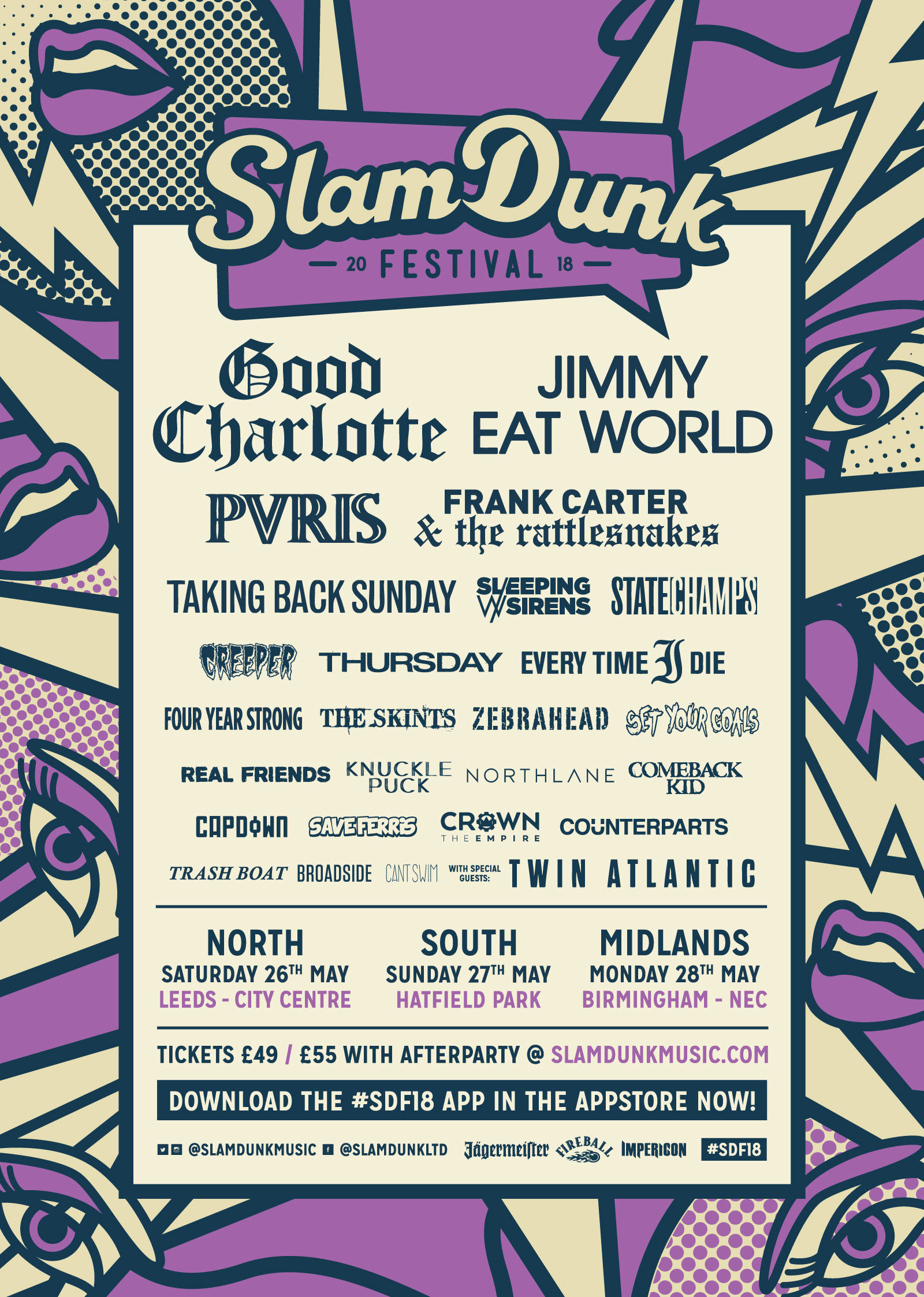