Following the highly successful, sold out February launch of #360RAW with AS SIRENS FALL, KILL THE SILENCE, STAND ALONE and DEADLOCK SAINTS opening proceedings, RICHARD WATSON, promoter of the 360 Club at Leeds Lending Room, and ALAN RAW, presenter of BBC Introducing West Yorkshire and BBC Introducing Humberside, are proud to announce the second of these special events.

Taking place on FRIDAY 13 APRIL – and subtitled #360RAW2 – the event will feature a further four of the region’s finest and most exciting emerging acts: SKULL from Leeds, for which the event also acts as a launch night for their debut album; ADORE // REPEL from Wakefield; BEING A TIGER from Huddersfield; and TEEFF from Leeds. Tickets are available here: https://www.skiddle.com/e/13163958

As with #360RAW1 in February, the night will see Alan Raw DJ before and between the live sets, playing new music of all styles from local artists. Anyone will be able to turn up and meet the face behind BBC Introducing and hand over demos which he may well play on the night, or pass onto the producers for consideration on his shows.

The ethos of #360RAW is purely about supporting emerging acts, a passion that both Richard and Alan share and one that sees them willingly offer musicians their time and help and advice, as well as attending free industry events, often arranged by the 360 Club themselves.

Having earned a reputation for their incredibly powerful live performances, including several supports at the personal request of the staggering Elvana, Leeds four-piece SKULL are set to launch their debut LP, THOUGHTS OF THE OTHERS, on the night of #360RAW2. The album follows two hugely acclaimed singles, RPM and LIGHTSWITCH, both of which feature on the album, and will be released by Shove It Up Your Cult Records on double vinyl.

Wakefield’s ADORE//REPEL released their debut album, EMPTY ORCHESTRA, last year to the kind of acclaim that doesn’t often bestow itself upon such a fiercely independent band. A band with their own record label; their own studio hand built by themselves; who operate without a booking agent or manager; and a band who embrace everything that has always been so healthy about the DIY ethic. They’ve also recently opened an independent record shop in Wakefield. And a barber’s shop, no less. And self-booked an eight-date USA tour for September this year. We are truly humbled.

Another act releasing via Shove It Up Your Cult Records, Huddersfield’s BEING A TIGER have developed an alt-rock / post-hardcore wall of sound that sees them surge through their sets with a ferocity that demands attention and invokes reactions from their audience in equal measures. Their latest single release, X PREDATES Y, is out now. 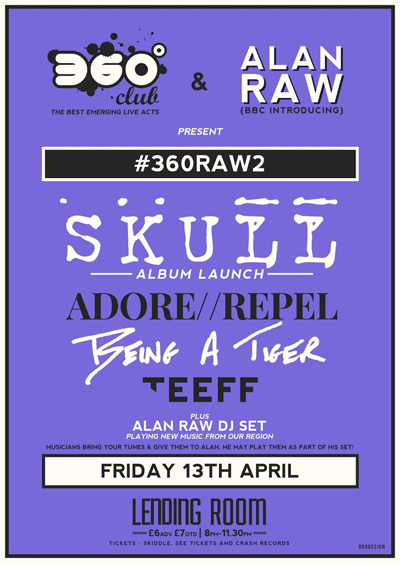