Celebrated Montreal rock and roll band The Damn Truth are pleased to announce they will embark on a 13-date UK tour kicking off at the York Grand Opera House on February 10th and finishing at Southampton The 1865 on February 25th, 2022.

If you can’t wait until next year to see the band in concert, on Wednesday June 9, 2021 at 8pm ET (1am UK) the Damn Truth will perform a virtual album livestream concert from Montreal. Livestream tickets are available from www.lepointdevente.com/billets/evk210609001

The Damn Truth’s latest single, This Is Who We Are Now has taken flight in the UK with eleven weeks of airplay on Planet Rock and a spot play on BBC Radio 2’s Rock Show with Johnnie Walker. The single also won Tracks of the Week twice on Classic Rock’s Louder Sound. 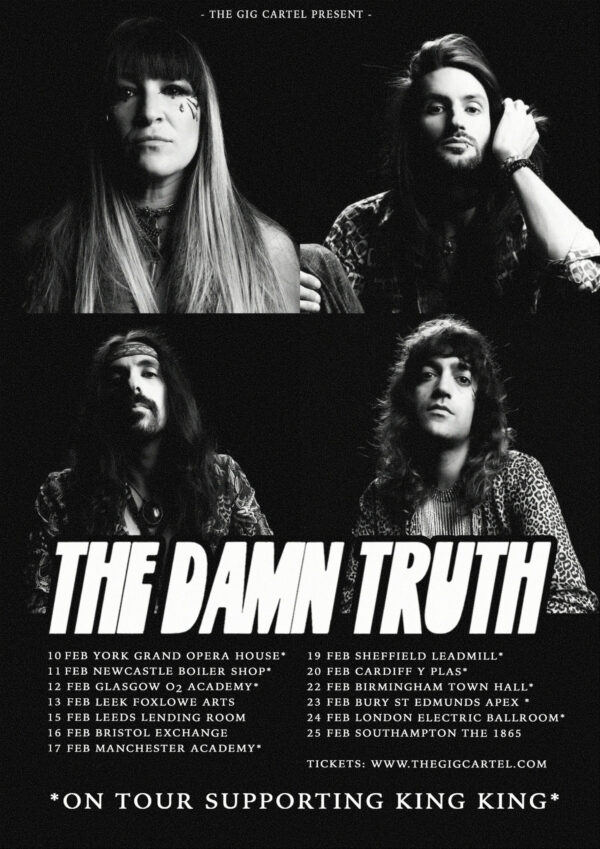 “We’re looking forward to touring the UK,” says lead singer and guitarist, Lee-la Baum. “Last time we played the UK was a one-night banger in London that left us wanting for more. We cannot wait to come back and hit the road in the UK.”

“The Damn Truth are a fresh revivalism of the psyche music scene from the mid 60’s,” says Jeff Laufer, editor of the Californian website, Rock Bands of LA. “Critics and fans alike praise their regeneration of the hard rock sound and values.”

“Bob Rock found a spirit within the band that he hadn’t experienced for many years,” continues Jeff. “He saw something special… an artist with burning talent that needed the right direction to break wide open…like lightning in a bottle.”