Long Division ​have confirmed the first wave of guests for this year’s festival, now scheduled for the weekend of September 25th rather than it’s usual occurrence in early June. Having made the decision to move the Wakefield festival to give them the best chance of staging it in a safe manner, Long Division’s organisers are now optimistic about the festival going ahead following the UK government’s roadmap towards easing Covid-19 restrictions. Consisting mostly of artists who were originally scheduled to play the festival in 2020, this initial lineup will be added to over the coming months.

At the forefront of the announcement are Sunderland indie stalwarts ​The Futureheads​, renowned beatboxer and comedian​ Beardyman​, lo-fi psych-punk duo​ The Lovely Eggs​, the Manchester post-punk collective ​Brix & The Extricated​ (featuring the ex-Fall members Brix Smith Start and Steve Hanley), and ​Lanterns on the Lake​ who released their Mercury-nominated latest album on Bella Union last year. Joining them are The Wirral’s ​She Drew The Gun​, Scottish singer-songwriter and Idlewild frontman ​Roddy Woomble​, and London-duo ​Peggy Sue​, along with Beans on Toast​, ​Too Many T’s​, ​Big Joanie​, ​Hands Off Gretel​, ​Langkramer​, ​Katie Spencer​, ​Jodie Nicholson​ and ​Mt Misery​.

With the first Long Division event dating back to 2011, the award-winning festival celebrates their long-running status this year with their 10th edition. An occasion which has grown over the years to become one of the most anticipated cultural events in the Wakefield calendar, Long Division draws droves of music lovers to the area from much further afield. 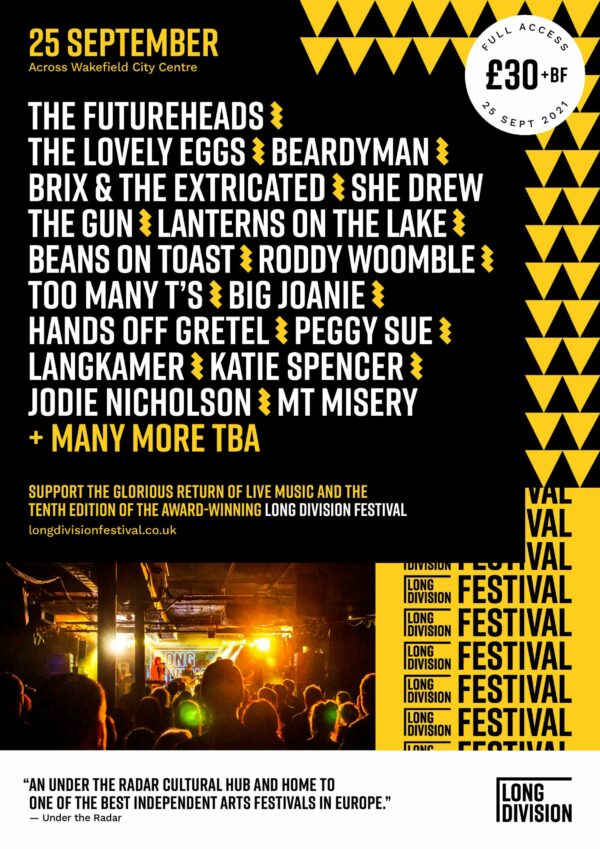 Committed to a wider role in providing support and opportunities to the city, Long Division have also been planning a number of important initiatives that will run alongside the festival (and throughout the year), including the introduction of a free-to-hire City PA system for Wakefield arts events, and securing additional funding to form the Wakefield Live Music Consortium to support a wider scheme of live music curation in the city. Beyond this, Long Division are also working on bringing a dedicated rehearsal space to Wakefield city centre, alongside a new education programme that will work with up to 100 young people throughout the year, earning them qualifications whilst supporting them in forming new bands and organising events. With all of this combined, the hope is that these efforts will hugely benefit the music offering of Wakefield in a wide sense.

“It’s such a strange mix of emotions to ‘be back’ with another lineup announcement. It honestly felt like the early days again, where it was exciting just to design a poster and see those names laid out, ready to share with the world. We want to give people the best possible Long Division we can. Not the biggest ever, but one that celebrates not just our ten years, and not just the return of live music but also the power of community. People being together – even if it’s with 1 metre gaps and masks and sanitising their hands every 30 minutes. Even if half the audience is watching via a stream. It’s going to be great!

This year audiences need to put their faith in their promoters, in their festivals, and they need to buy tickets. For Long Division refunds will always be available should the worst happen. And I know that finances may be stretched. But at Long Division that £30 for a ticket goes so far and enables so many artists to perform. Grassroots festivals like this (there are many more) are an essential part of kickstarting this insane machine called live music. We’d love you to join us in Wakefield this year!”
25th September – Wakefield City Centre  http://longdivisionfestival.co.uk