TONY HANCOCK fans will be in their element this autumn as the first ever UK tour of the classic radio comedy Hancock’s Half Hour opens at the Richmond Theatre on 28th January, before touring to theatres across the country, culminating in a special gala performance at the Leicester Square Theatre, London on 7th April.

In 1954, Tony Hancock burst onto the airwaves of the BBC Light Programme with a comedy show unlike anything the British public had heard before. Playing a less successful version of himself and surrounded by a cast of fellow comedy greats including Sid James, Hattie Jacques and Kenneth Williams, Hancock’s Half Hour was one of the first programmes in the genre we now know as sitcom.

Written by young up-and-comers Ray Galton and Alan Simpson, who later went on to create Steptoe and Son, Hancock’s Half Hour redefined radio comedy and has had people laughing non-stop for the past 65 years.

Now, 65 years after its first broadcast, Apollo Theatre Company, who recently produced UK tours of classic radio comedies, The Goon Show and Round the Horne, bring the show to the stage for the first time. 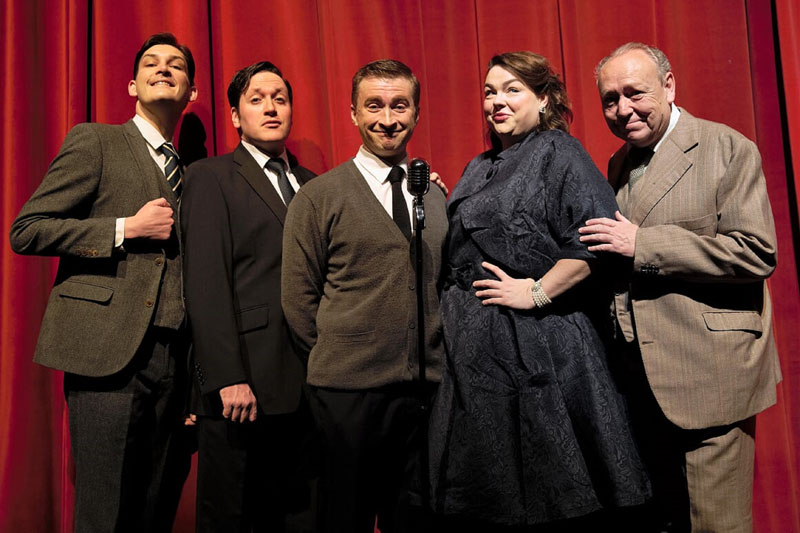 Producer and director Tim Astley says, “Hancock’s Half Hour was one of the greatest comedy shows of all time and it is truly an honour to be able to bring it to the stage. We are so used to sitcoms as a part of the comedy landscape these days that it is hard to imagine a time without them and to appreciate just how ground-breaking the show was when it came along in 1954. Tony Hancock’s genius ‘put-upon’ persona had such an influence on so many great comedy characters from Basil Fawlty to David Brent and it cannot be underestimated quite how much he helped shape comedy as we know it today.

“Being a radio comedy show, these characters and their world largely exist in people’s imaginations and this show, which recreates the BBC recording studio of the 1950s, gives audiences a chance to see them brought to life like never before and will create a unique experience for fans both old and new.”

The show stars Dead Ringers impressionist James Hurn as Tony Hancock and Colin Elmer reprising his role from Round the Horne as Kenneth Williams, alongside a cast of brilliant actors who will bring to life the stars of yester-year who may be gone, but certainly not forgotten.

So come and take a trip to 23 Railway Cuttings, East Cheam to join ‘the lad himself’ and his motley crew for three classic episodes of this hilarious show.